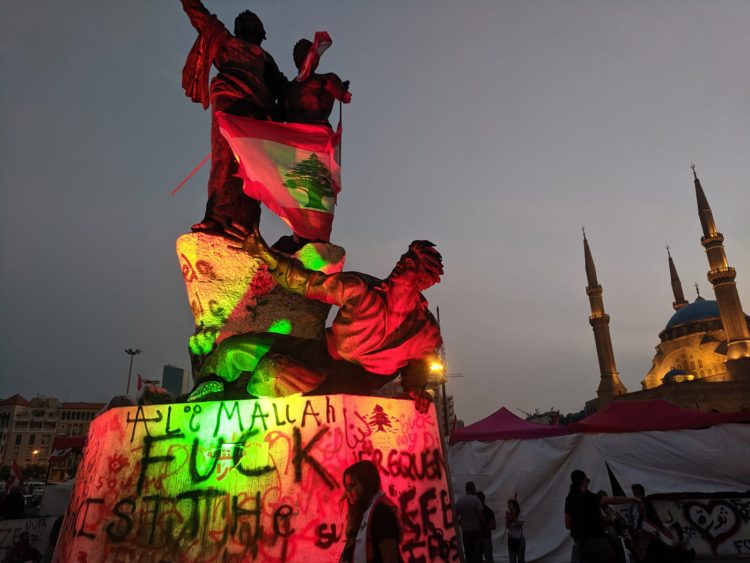 Lebanon has witnessed its fair share of crises throughout the last decades, and the current events are only a continuation of this deteriorating course. How is this situation affecting our beloved music industry? With our currency losing almost half its value while a revolution aimed at the corrupt elite was taking place, this global pandemic is being seen as the cherry on top for many people who are barely able to make ends meet. One of the most, if not the most, affected industries is hospitality (including restaurants, bars and nightclubs), which in turn affects over 350,000 workers up and down the chain. For obvious reasons now, bars and nightclubs have shut their doors, making the future of the industry even more uncertain.

Even before the global COVID-19 pandemic, the nightlife industry in this country was going through a rough phase. Not only were people less able to afford going clubbing due to the economic situation, but organizers were also struggling to pay artists, especially international artists, because of the currency value drop. Promoters have been essentially paying international artists 40% more because of this devaluation, forcing them to cut costs elsewhere. As an example, during the revolution, The Ballroom Blitz had only two of its three rooms open, even closing the main room most of the time. This had to be a difficult choice, because on the one hand, you’re taking the experience away from the clubber, but on the other, you simply have fewer dancers in the club and thus more space to fill.

Most clubs also closed for a few weeks during the revolution, which was an inspiring expression of solidarity to encourage people to support the cause and hit the streets, yet things couldn’t go on like that forever, and just as the industry was starting to recuperate from the economic collapse and the subsequent uprising, COVID-19 forced us back indoors.

There are a few different points of view regarding spaces re-opening considering the global crisis, and none of them are necessarily right or wrong. Some higher-end places with more financial stability would rather wait until there are no more new virus cases to open, which is technically considered the safer thing to do. Those less fortunate financially will probably open as soon as the government allows them to, and they can’t be blamed for that. People’s livelihood is just as important as their health, and they often come hand-in-hand. Many often forget that club and venue owners employ many people who really need that job and have families to feed. However, most of the players in the industry have resorted to playing the waiting game.

The future is extremely uncertain at the moment. Everyone who had plans in the pipeline is currently feeling disappointed. Many of those who have worked towards a certain goal for years feel like they have to start from scratch again. “It’s hilarious and really sad at the same time. The past seven years of my life have basically been leading up to the universe saying ‘psych!’ and pulling the rug”, jokes ETYEN, an influential music producer and founder of Thawra Records label, who was very active during the revolution. “Work has been really slow since the revolution. I was saving up for a while to study in Berlin but now, with the currency situation, it just feels like starting over. ” Most people in other industries feel the same way as well.

Walid Merhi, owner of one of the busiest gastropubs in Hamra, Ferdinand’s, is playing an active role during these difficult times by bringing together over two hundred food and beverage outlets to voice their concerns to the Syndicate of Owners of Restaurants, Cafes, Night-clubs and Pastries in Lebanon. Walid has been calling on people to sign a petition on savelebanesehospitality.com with demands to the government to help the hospitality industry. “Nobody knows how this will end or how it will impact our lives and businesses,” says Walid, “ I think we will be adjusting as everyone adapts to a new beginning. I think the real challenge that can take our businesses down is the currency issue.”

Hundreds of businesses have shut down this year, and this will only get worse during the next few months. According to the Syndicate, the hospitality industry generates USD10 billion per year in revenue, 80% of which gets directly plugged back into the economy via wages and rent. Thanks to Walid’s efforts, The Syndicate is currently demanding that the government freeze all loans, extend contractual leases, exempt rent payment for at least six months, and postpone/reduce all fixed costs for six months (especially VAT, water and electricity bills). The Syndicate also demands that the government provide assistance to the hospitality industry—vital to restore confidence and boost the economy.

With the summer season approaching, it is important for us to think about how we are going to recuperate from this mess. As difficult as it is to think about the losses we are going to have to accept, we cannot forget about all the people who will lose their jobs and livelihood. We have to ask ourselves what we can do to ensure the survival of our industry.

“With the economic crisis this year, our group had to triple its efforts to sustain our business, and reduce the damage as much as possible”, says Tala Mortada, DJ and co-founder of Factory People (the mother company behind The Grand Factory, AHM, 2nd Sun and Clap Clap Studio), who has also been very active during the Revolution. “We are mainly focusing on remaining positive, despite all the challenges that we are going through. The pandemic has now forced us to shut down our venues and offices, but we are still hosting workshops and conversations with our favourite artists online while planning for different possible scenarios in the future.”

For now, it is clear that we will have to limit gatherings of 50-100 people for “at least the next few months, and maybe even a year”, according to many health experts and epidemiologists such as Adam Kucharski, author of The Rules of Contagion. A new report from the COVID-19 Response Team at the Imperial College of London also notes that social distancing measures need to be maintained “until a vaccine becomes available (potentially 18 months or more)”.

To survive this crisis, re-structuring many business models will be necessary; this will be especially difficult for large-capacity nightclubs. Smaller-scale models similar to what clubs used to do before Techno and House music became massive trends post-2015 might work. For the purists, there is a silver lining in this. Night-clubs paying USD10,000+ for the same DJs to play the same overplayed bangers is just not going to be feasible anymore, so promoters will have to start thinking more carefully and begin the cherry-picking of lesser-known quality international talent. This also means more bookings for local DJs who have been struggling to make ends meet since the revolution.

Finally, it is important to start acting as soon as possible and prepare for the worst while also cutting our losses to ensure the sustainability of our industry. It is not an easy time for everyone, and what can really help is solidarity and collaboration. Lebanon still lacks the maturity that more ‘developed’ countries have regarding the importance of the music and nightlife industries, so it’s up to everyone in the industry to work together and establish a network that can benefit the whole. We will have to work with what we have because the ‘old ways’ are not going to work anymore. But, rather than abandoning hope, we must try to find ways to persevere together.