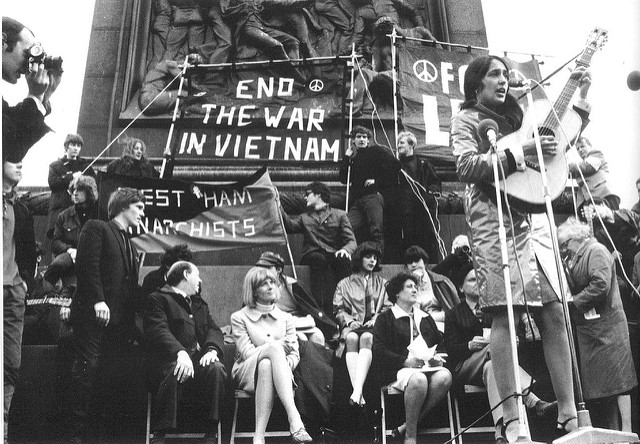 11 of the Best Protest Songs From Around the World

Music – like all the arts – is a medium for expression and lends itself well to outspokenness, protest, defiance.

There are times when all music felt political, and when many artists across the world ignited people’s collective consciousness as they condemned injustices, criticized governments and called for change through song.
Musicians have given a militant or hopeful voice to broad audiences, marginalized communities and sometimes entire populations – and they still do today.

Here are 11 of the finest protests songs out there.

If you’ve been exposed in some shape or form to American culture, the melody of This Land Is Your Land should sound familiar to you. What you might not realize however, is that behind the deceptively cheerful, simple melody lies a social commentary against the deep inequalities that divided the United States in the wake of the Great Depression.

One of America’s most famous folk songs, it was composed by Woody Guthrie in 1940 as a sarcastic response to a patriotic song – Irving Berlin’s “God Bless America” – which played endlessly on the radio in the late 1930s.

This land, the song insists, is – and can still be – made for you and me.

The history of the song is an interesting but lengthy one, so we’ll let you find out more here. While you’re at it, check out this version by Pete Seeger and Bruce Springsteen at Obama’s inauguration.

Mississippi Goddam was both a monument of the civil rights movement and a turning point in Nina Simone’s career.

She introduced it at Carnegie Hall in 1964 as a “show tune, but the show hasn’t been written for it yet”, before a mostly white audience.

“Alabama’s got me so upset, Tennessee’s made me lose my rest, and everybody knows about Mississippi goddam.” – The song references three states that were major battlegrounds of civil rights clashes, including the death of four African American girls in an Alabama church bombing and the assassination of African-american civil rights activist Medgar Evers by the Ku Klux Klan in Mississippi in the early 1960s.

The melody is upbeat and driven, a vehicle to Miss Simone’s mounting fury and outrage which clearly pierces through the lyrics. Upon release, the song was banned in several Southern states and boxes of records were returned to her cracked in half from major radio stations in the country.

The live performance below pretty much speaks for itself.

Bob Dylan wrote this as a deliberate attempt to create an anthem for change amidst the civil rights movement, hippie counterculture, the Vietnam War and the turbulent and vibrantly militant times of the 1960s in the United States.

This is perhaps one of Dylan’s finest songs and an alluring expression of societal change.

We Shall Overcome – Joan Baez

Originally a gospel hymn dating from the 1900s, this is the archetypal protest song, which became an anthem of the Civil Rights movement but has later been sung and adapted by countless artists from Pete Seeger to Bruce Springsteen in a wide variety of protests, speeches and settings worldwide (more on this here).

We picked a version by folk singer-songwriter and infatigable activist Joan Baez. She recorded it in her home and posted it on YouTube in 2009 in support of the Iranian people during the wave of protests that rocked Iran that year. As an hommage, some portions are sung in Farsi (from 1:40).

Bella Ciao is a popular Italian anti-fascist hymn that was sung by the resistance movement in Italy during World War II. It’s been translated to several languages and sung by a variety of – mostly leftist – groups. The melody is energetic and features feverish clapping in many versions as lyrics call for freedom.

Here’s a fabulous version by Yves Montand for you to enjoy.

One might incorrectly think that Leonard Cohen wrote The Partisan, but it’s actually an adaptation by Hy Zaret of “La Complainte du Partisan”, a French Resistance song dating back from 1943 and written by Resistance members Emmanuel D’Astier de la Vigerie (back then known as “Bernard”) and Anna Marly.

First in English, and then in French, the song conveys a strong sense of right and wrong, of resistance and occupation, of loss and sacrifice (I’ve lost my wife and children // she died without a whisper) but also hope and defiance (But I have many friends / And some of them are with me // Freedom soon will come).

Gainsbourg was known for his nonchalant wit and playful eccentricities, but perhaps less so for political involvement through his music. He did however decide to record an entire reggae album in French, called it “Aux armes et caetera” and features his own ironic take on the French National anthem of the same title.

The result is almost too good to be true, with a distinctive reggae beat rhythming the Marseillaise lyrics. The chorus of the anthem (“Aux armes citoyens / Formez vos bataillons / Marchons / marchons! / Qu’un sang impur / Abreuve nos sillons!”) is almost entirely dismissed and replaced only with “aux armes etc…”. Whether intended or not, this is quite literally a snub to the French establishment, the government and all that goes with it.

Gainsbourg’s unapologetic play with genres hit some sore spots in French national identities and anxieties. It caused some backlash, but also gained him considerable popularity.

In the same vein, Mashrou’ Leila also exploits the Lebanese national anthem but this time the band makes a very explicit and acid socio-political critique of the government.

“Lil Watan” (“for the nation”, from the Lebanese National Anthem “Koulouna Lil Watan” i.e. “All of us for the nation”) describes a state where patriotism is exploited, freedoms are abandoned and apathy is cultivated.

The government is personified and becomes a belly dancer who lures citizens in and distracts them with her dance.

With inherently joyful lyrics and an uplifting melody, it’s hard to tell that this is a actually protest song. This song was used in an advertising campaign calling for a “No” vote to the plebiscite sought by dictator Pinochet in Chile in 1988.

The campaign was simply about happiness – which would come after people voted No – and aired for 15 minutes every evening for 27 days until the day of the referendum. García and his team were threatened several times and subject to intense acts of intimidation from Pinochet’s regime, but they held on.

For all amateurs of independent South American political movies out there, check out No.

Zombie is a criticism of the brutality of the Nigerian military by Nigerian Afrobeat pioneer and political activist Fela Kuti.

It was released as part of the eponymous (and incendiary) album Zombie in 1976, which quickly became very popular in Nigeria. The backlash was immediate, as Nigerian soldiers attacked Kuti’s commune and caused his mother’s death in the process.

“Jo’anna” is the personification of Johannesburg and South Africa’s apartheid regime, who “makes a few of her people happy” and “don’t care about the rest at all”. Superimposed to a pop melody, the candid lyrics denounce the apartheid regime, the passive international community and propaganda, but ultimately calls for hope for “everybody to live as one”.

This song was part of the soundtrack of Ziad Rahbani’s 1980 play “Film Ameriki Taweel” (“The American Motion Picture”).

The song conveys a mixture of resigned disappointment and sour cynicism towards Lebanon and the state of its politics. The lyrics would resonate just as much with today’s Lebanese youth, as Rahbani concludes that Lebanon is not really a country, but a group of people continuously living in disunity.