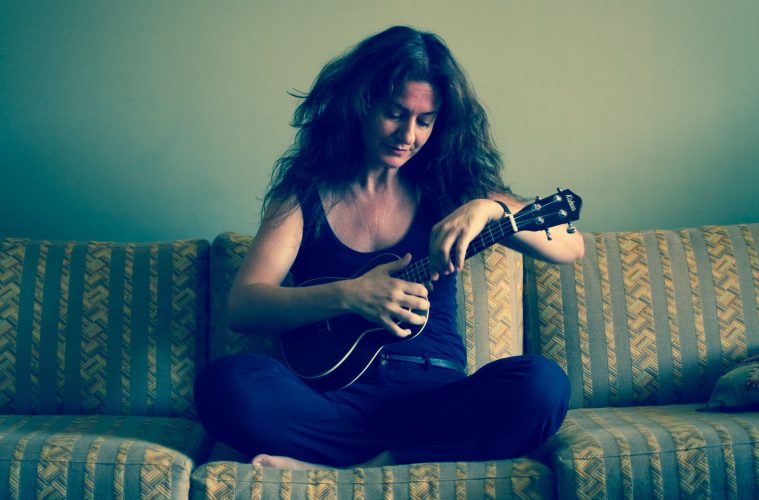 On the London Mini Tour With Sandmoon

Sandra Arslanian and Sam Wehbi landed  in London in the beginning of September 2018 for a three concerts. Sandra and Sam are members of Sandmoon, an indie pop/folk band from Beirut, Lebanon. Sandra founded the band eight years ago, just a few years after coming back from Belgium where she spent most of her youth. She is the band’s songwriter and lead singer. Additionally, she plays the ukulele, the guitar, and the keyboard while Sam takes on the role of the lead guitarist. The other members of the band are Ribal (cello), Georgy (bass, guitar) and Raja (drums), all three who didn’t make it to London.

It was a sunny but windy day in London when we landed on that Friday afternoon. Accompanying the band on this mini tour were myself (reporter from Switzerland), and May Arida (photgrapher from Beirut). Both of us have known Sandra for quite some time and have been closely following her career: from releasing three albums and an EP to winning a Lebanese Movie Award in 2017 (for composing the score of Philippe Aractingi’s film Listen).

We meet Sandra and Sam in Katja Rosenberg’s apartment in Walthamstow in northern London. Katja’s flat is small and well stuffed, but this is London where space is a rare commodity. The apartment would be Sandmoon’s home base for the weekend.

I will be the great unknown

After the first concert, which took place in a chapel, Sandra gives us the updates: “Around two dozen people only attended the sold out gig. We played for eighty minutes and the people just wouldn’t let us leave”. We are now looking forward to see what tonight’s concert will bring. It will be a Sofar event in a private place in Bethnal Green.

On our way to the Sofar concert Sandra hands out Stimorol chewing gums to everybody. “Tonight” Sandra says, “I will be the great unknown”. No one would have ever heard of Sandmoon or Sandra Arslanian that evening. “Our music might not work in Spain. Here in London however, it definitely works. People like what we do and how we sound.” I ask Sandra if she’s fed up with Lebanon and its audience. “Not really. But, of course, Lebanon is a very small market for English pop/rock music. Additionally, a lot of the people who go to concerts do it not because of the music, but because it’s an event that’s treated as a social opportunity. It’s like a herd moving from one place to another. It’s really nice to play in front of people who actually listen to the music.” Tonight’s Sofar gig takes place at the loft-style apartment of Casey and his girlfriend Rachel. Sandmoon start their concert with “Home”, one of their trademark songs.

they very much liked what they got

Sandra begins her performance using no microphone. Sam is her ideal musical partner, getting the best out of a rusty acoustic guitar that he had to borrow from a friend. With the small combo, Sandmoon depends even more than usual on Sandra’s vocal abilities. The audience is taken, particularly when the band performs “The Answer”, a song from last year’s recording session in Berlin. This is followed by “Walk”, an old favorite. It’s Friday night and the audience asks for something more upbeat so Sandmoon switches the mood, leaving Sandra sweaty and exhausted at the end of the show. That whole performance left the audience quite satisfied.

We pick up some Chinese food at a takeaway in Walthamstow before huddling in Katja’s apartment to eat. The next day, we meet at Katja’s apartment again where we find Sandra in a very good mood. Sam plays around on his electric guitar and goes into a catchy rock tune from Uncle Sam, his own band back in Beirut. In the meantime, Katja is busy doing some household work such as watering plants and doing laundry.

Katja was born in Germany but has been living in London since 1998, working as a freelance PowerPoint guru and an organizer of art events. It is thanks to her that Sandmoon is in London right now. Katja sits down at her piano, jammed between a bed and a wall, and plays Bach. Sam plays along on the guitar, lying on the bed, his eyes to the ceiling. We walk to Jesse’s in the pedestrian area of Walthamstow, an underprivileged neighborhood with a Babylon-like ethnic diversity. Katja is chatting up everybody and promoting tonight’s Sandmoon concert. “Sandra is an excellent and famous singer”, she says. Saturday night’s venue is the Hornbeam Café, an organic and authentic neighborhood café which also serves as a community center. The Hornbeam is similar to the Onomatopoeia,  a place in Beirut where Sandmoon often performs.

Just before the show, I catch up with Sam outside the café and ask him who is Sandra to him. “Sandra is like a mother to me”, he says. “She is a great teacher. I’ve been playing with her for three years now. She has helped me have much better self control and awareness. I am still relatively young, and therefore I have the tendency to do impulsive things.

Seeing it like this, from A to Z in one sequence, shapes it up to be an impressive body of work.

Even without the full band, Sandmoon covers a lot of musical ground with their performance this evening. Sandra clearly has made the transition from recording artist to performing artist. She is at ease on stage, displays a lot of self confidence and is closer to the audience than I had ever seen her.

Throughout the concert, all their videos are projected in an endless loop on a screen behind Sandra and Sam. The audience sees images of Beirut in the 1960’s and of people protesting the political order in recent years. The video of Sandmoon’s 2017 single “Shiny Star” passes by and so does that of “Time Has Yet To Come”. Seeing it like this, from A to Z in one sequence, shapes it up to be an impressive body of work.

On our way back to the apartment we stop for a late night dinner at Thainese, an Asian restaurant on Walthamstow’s main road. We talk about Prince and Bowie—Sandra’s musical heroes—and about Fentanyl, a debate about which pain killers should be classified as drugs follows.

On Sunday, we go to Walthamstow’s pedestrian area again to have lunch at a Bulgarian steakhouse. “What does the future look like for Sandmoon“, I ask Sandra. “Could hiring local musicians in London be possible to play future concerts here with a full band?” “It could”, Sandra replies. “However, it is hard for me to play with strangers. Sam and me, for instance, that’s like an osmosis”.

Predictably, Lebanese musicians are all shaped by the same experience: Lebanon. Could musicians from London emulate this experience? This is often an experience of war and it is also reflected in Sandmoon’s current set list, going from songs off the first album raW to “Masters of War”, a Bob Dylan cover. “I  haven’t really had to live through the war myself”, says Sandra, “At least not first hand. In the 2006 Israeli conflict I was abroad. When we left Lebanon initially because of the civil war, I was only seven months old”. Does it matter? Despite not personally being there, war and its consequences are profoundly anchored in Sandra’s DNA.

Back in Switzerland, Sandra messages me that Sandmoon will soon start to record new songs, with an aim to have a new album out in 2019. Sandra has been very creative lately; the good experience she had playing in London inspired her enough to write many songs that now need to be developed, refined and recorded.

As for London, Sofar is considering booking Sandmoon again when they are back in town and Katja is set to meet someone responsible for the Awan festival on Sandmoon‘s behalf, given that he couldn’t make it to the Hornbeam Café that Saturday. “We clearly aim for another Sandmoon visit to London soon”, says Sandra. Londoners dig the melancholic side of Sandmoon’s music and they always love a good storyteller. That’s precisely why Sandmoon came to London: to gather up a new audience and find new opportunities to spread their message and their love for music. More to come!

Pictures by May Arida