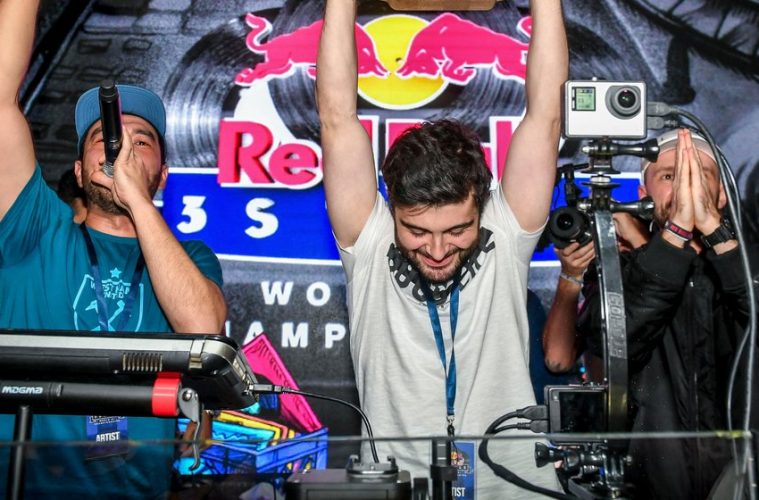 Red Bull just ended 2017 with the Lebanese leg of the talent-driven Red Bull 3Style World DJ Championship at Discotek, Beirut. Whether with the judges, the participants or the crowd it was yet another sonic landmark for the local DJ scene in Beirut. Incredible talents have risen to the surface and showcased to a tasteful crowd that’s well-aware of musical flows and blows.

The special guest DJ and judges were a premium line-up covering different genres and worlds, brought together by a passion for crate digging and turntablism. The night kicked off with founder of Beirut Groove Collective, Mr. Ernesto Chahoud, whose an avid vinyl collector and a master selector. Ernesto has been playing and collecting vinyl since the late 80s, he certainly knew how to set the mood for a night of grand proportions.

After the groovy lift-off, Caesar K took over the mothership controls. Caesar is a pioneer of the breakbeat genre in both Lebanon and the Middle East since the late 90s. He’s the founder of VL Records and had collaborated with artists such as RZA from the Wu-tang Clan, Shavo from System of a Down and the outstanding artist and producer Nile Rodgers. His set was a masterclass in DJing that gave us a hint of what to expect through out the night.

Another pioneer joined the stage, our host Chyno, whose an MC, rapper and a producer, but he was there on hosting duties leading us into the competition. The 6 competitors were: DJ Goadman, RossBD, Edrien, Oh J!, DJelios and DJ Beats. Every DJ had to play a 15 minute set each crossing over more than 3 genres. It got pretty weird, which is usually a good thing when it comes to sonic structures. From hiphop, reggae, rock n roll, pop, breakbeat and a lot of bass tunes, the competitors demonstrated some wicked mixing skills. They were judged based on crowd interaction, choices of music, originality and technique.

Now the ball was in the court of our judges, who were another handful of infinite talent to join the championship. ESKEI83 helmed the Red Bull 3Style Championship in 2014 and has been a busy bee since. His routines are an internet sensation and a sure way of firing up any dance floor around the world. Dan Gerous was a finalist in 2015 and he has been touring the world’s dance floors ever since. Last but not least, the Lebanese DJing virtuoso, MaDJam, who has been leading the Lebanese scene with his vibrant character and unmatched drive for sonic exploration.

It’s not easy to let go and play with these masters judging your every move, but our contestants brought it all to the turn-table and even dared to break unprecedented boundaries by introducing Arabic pop to breakbeat. It was all thrown in the mix. After the round of sets, DJ Beats was dubbed as the champion of the night for his buoyant personality, peculiar selection, pumping vibe and slick mixing techniques. He got qualified to represent Lebanon internationally as a finalist in Red Bull 3Style World DJ Championship in Poland.

The night was closed by ESKEI83 and Dan Gerous performing their beat-breaking breath-taking routines. It was an overwhelming experience having that much explored and unexplored talent spinning under the roof of Discotek. Stay tuned for the finale of Red Bull 3Style DJ Championship that is coming up, and it only gets bigger.