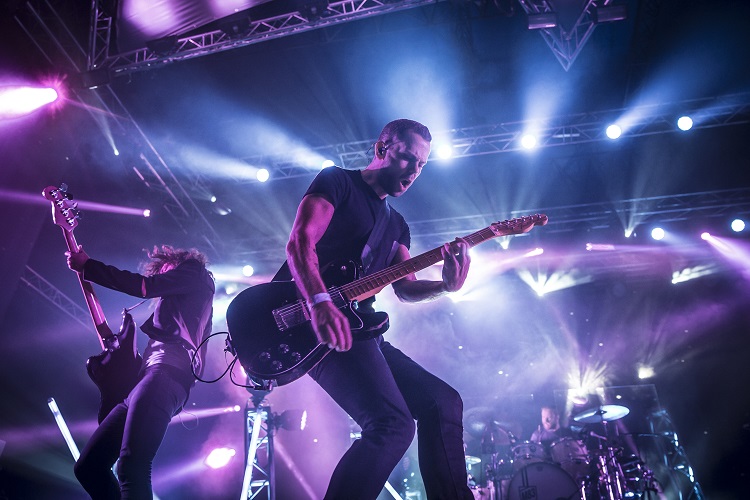 M83 is the brainchild of Anthony Gonzalez. Like Phoenix, or Daft Punk, the band is part of a wave of french acts that are more succesful outside of their home country.

Let’s start right away with the most famous LP of M83. Often, the most commercial album is not the best, but in this case, Anthony was succesful in creating a masterpiece that was both in line with his dreamy vibe, and in making it accessible to more casual fans. The best examples are ‘Midnight City’, which tends more towards the pop vibe, and ‘Wait’, more towards the spacey vibe. Although these are the most famous songs, Hurry Up, We’re Dreaming is much, much more than that.

When you press play, the song ‘Intro’ starts, and right away you are teleported in their universe. Dream Pop, Synthpop, Shoegaze… you name it. The double-album, with 22 songs, has some other bangers, like ‘Reunion’ and ‘Steve McQueen’, which translate amazingly live. But to be honest, the emotional ones make the strenght of the album. Your heart will open with ‘Soon My Friend’, ‘My Tears are Becoming a Sea’ or Anthony‘s favorite, ‘Splendor’. And you will come back to reality after ‘Outro’, which include one of our favorite sentence:

“Creatures of my dreams, raise up and dance with me“.

M83 released its first album in 2001, with an eponymous opus. It was already precursor of what was to come, with lots of electronics and an overall experimental vibe. Not their best work, but definitely enjoyable. It was quickly followed by Dead Cities, Red Seas & Lost Ghosts (2003), the last album that Anthony released with founding member Nicolas Fromageau. This one also was experimental, with a beautifully weird piece like ‘0078H’, but it also started to tend towards a more cinematic sound, like ‘On a White Lake, Near a Green Mountain’. What’s crazier is that the most beautiful piece is probably the eponym 17-min track, which isn’t even on the main album but on the remix & b-sides CD.

Before the Dawn Heals Us and Digital Shades Vol.1

M83 keeps the pace after that and releases another album after two years. Before the Dawn Heals Us still experiments a bit, like on ‘*’, or with the storytelling on ‘Car Chase Terror’, but Anthony is really starting to find his sound. This sound is ambient, atmospheric, very emotional. You can feel it in the calmness of ‘I Guess I’m Floating’ or the explosion of feelings in ‘Teen Angst’. The most beautiful piece of the album is probably the closing track though, ‘Lower Your Eyelids to Die With the Sun’, which is as beautiful as the title. An amazing 8min instrumental.

Again, after an interval of 2 years, M83 releases Digital Shades Vol.1. It is probably the album that is the easiest listened in full. No strong “hit”, except maybe ‘By The Kiss’, lots of sounds added, like real waves sounds for “Waves, Waves, Waves”. This album is an experience, and also ends on an amazing 8min instrumental track, ‘The Highest Journey’.

Saturdays = Youth was released one year after Digital Shades Vol.1. It is a fan’s favorite, sometimes even on the 1st place, because if Hurry Up, We’re Dreaming was 50% pop and 50% M83, the ratio on S=Y was more like 25/75. Indeed, you can feel the accessibility of the sound. ‘Kim and Jessie’ is a great catchy song, and ‘We Own the Sky’ is a hit like the ones on Hurry Up. But you can feel the nostalgia even more, especially on ‘Graveyard Girl’, which gravitates around shoegaze, and the numerous instrumental tracks.

There is the dancey ‘Couleurs’, ‘Highway of Endless Dreams’, which is a song to play on a nighttime roadtrip, ‘Dark Moves of Love’, which is exactly what you think it is based on the title, or ‘Midnight Souls Still Remain’, yet again another perfect closing track, and probably the most beautiful of them; yet, the easiest. It’s weird, you don’t need much to create an M83 piece, but at the same time… how does he do it? ‘Midnight Souls Still Remain’ is one of those pieces that can only strenghten your beliefs: whether it is in God, in Love or else. Then came Hurry Up, We’re Dreaming, followed by the controversial Junk.

Junk is the most controversial album of all, and for good reason: M83 moved away from what they do best, to give us something different. Is it really that bad? No, for three reasons: first, and most importantly, Anthony doesn’t owe us anything. He makes the music that he wants, and if we don’t like it, we just don’t buy it. Second, if he released an album similar to his previous work, people would have found something to complain about. I mean, did you see an outpouring of acclaiming articles for Digital Shades Vol.2? No, and it wasn’t bad neither. Finally, we can agree that Junk has some pretty good songs in it: ‘Do it, Try it’, ‘Time Wind’ with Beck… I even liked ‘Bibi the Dog’, which people complained the most about. And don’t forget that ‘Solitude’ is the closest we will get to ‘Splendor’.

The reason we shouldn’t complain about Junk though, is that it propelled M83 from a pretty good live band to an excellent one. Personally, their show at Sziget Festival in 2016 was my favorite ever and it will be hard to top off. The band had it all: ambient sound, emotions, atmosphere… Junk added the craziness that was missing. ‘Laser Gun’ is so fun live, and ‘Go!’ is great, especially when Mai Lan joined them on stage. What was even better on this tour, is that they played older songs, including ‘Sitting’ from the first album (!), and ‘Lower Your Eyelids to Die with the Sun’, which I never dreamt that I would experience live.

M83 didn’t tour after releasing the second volume of Digital Shades, DSVII. Maybe Anthony is preparing another album, more suited for live shows? In any case, don’t miss out on DSVII, it has some amazing moments too.

I realize that the article is mostly a listing of songs. Anthony brought a lot more to music, and to cinema with some Original Soundtracks (like Oblivion), but it’s hard for me to describe M83. Some feelings, we know. Or we can relate to. Like Love, which has been written about countless times. But even then, it’s hard to describe when you feel it. What about a feeling I have no reference to?