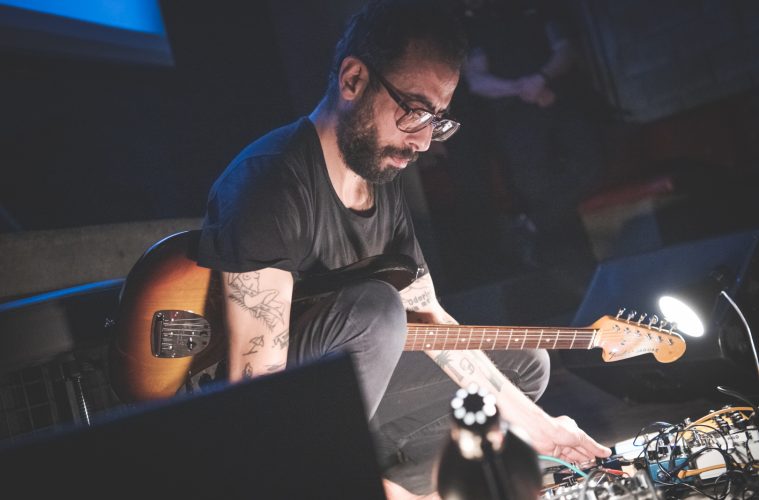 I Stutter When I Speak of Love & Death: Interview

It’s a Thursday night, you had a long day at work so you treat yourself to a glass of wine and walk past the black curtains to find a seat in the dim yet beautifully minimal gallery. There is a huge screen in front of you. You see images of Beirut at different times of the day, you’re taken to different countries, there are short sentences guiding you through the visual and sonic experience, you look to your right and you’re suddenly reminded that you’re not watching a movie.

A collection of images put together in the form of a short visual experience (I have no other words to describe it), with what feels like the perfect soundtrack to it being played live by a thin creature in black,  holding nothing but a guitar, and tweaking around a bunch of guitar pedals scattered on the floor.

I Stutter When I Speak of Love and Death. If you’ve ever wondered what Charbel Haber’s mind looks like, picture this: living room with red couches in the middle, surrounded by mountains of books and minimal lighting, with posters hanging on the walls and frames positioned carefully on the floor, and a bunch of weird items (which I think are souvenirs) laying around on table tops.

His latest project I Stutter When I Speak of Love and Death made me feel all sorts of things when I saw it at Mina Image Center, which is why I had to do something about it: feature it on the list of acts you should catch live in Lebanon (Read about May Berde and Escalier 301 B, the first two acts featured on the list).

From the start of his music career, future plans and influences to his love for cats and his rituals, an interesting chat with Haber shaped itself into the article below whose main purpose is to make you look forward to September if you’re in Lebanon (or October/November if you’re in Europe). Who the hell is Charbel Haber?

Charbel Haber is an artist, musician and music composer who’s been part of the local Lebanese scene for years now, starting with his first anger-fueled, rebellion-inspired project in post-war Beirut: Scrambled Eggs. It was born in the ’90s, after Haber and his friends bought guitars and decided to make grunge music with hints of post-rock and post-punk, drawing inspiration from cinema and literature, among many other things.

His love for experimental music started with Scrambled Eggs as he was trying to push the boundaries of punk and rock. In 2000, his fondness of music experimentation grew stronger with Irtijal, paving the way for one of my personal favorite local bands till this very day: The Bunny Tylers. His other projects include Malayeen, Johnny Kafta Anti Vegetarian Orchestra, Omarchestra, Good Luck in Death, and I Stutter When I Speak of Love and Death, the star of this article. Haber loves titles and he believes that the feeling is mutual. His band names, on the other hand… Not so much.

Everything he wants to say, at this point, is pretty much present in the title of the new project itself: I Stutter When I Speak of Love and Death. Haber explains that it has a lot to do with age. He’s 40 years old and he feels like the idea he once had about what love and death mean is no longer valid. He stutters whenever he speaks of these two because he has no idea what they mean anymore. He found himself passive, powerless and ignorant when he came face to face with their real-life implications. He handled the situations by seeing the poetry in them.

The music itself takes the listener through every single emotion expressed in the title – the regular ambient/ethereal sounds you usually find in Haber’s music are there but there are sounds that are completely interrupted as if one is actually stuttering. There is not one melody that ends, they’re always interrupted. Being a ’90s kid, Haber grew up listening to Smashing Pumpkins, Slowdive, Sonic Youth, and Nirvana, to name a few. If you’re into that, you can check out the mixtape he curated for us, including the songs that helped shape his sound.

Haber found my “which books would you say had the biggest influence on you?” absurd. “This question has no answer at all. I would start and not know when to stop,” he said. I did, however, manage to get a few titles out of him so literature lovers: get your notebooks and pens ready cause you’re gonna want to write them down.

Haber recently came across A Confederacy of Dunces by John Kennedy Toole, which led him to read the Neon Bible by the same author. He is currently being mind-blown by Seiobo There Below by László Krasznahorkai. A huge believer in the need to re-read books you feel have changed you, he plans on picking up George Orwell’s 1984 again. One book that really affected him is La Possibilité d’une île by Michel Houellebecq. He first read it when he was in his late 20’s and although he understood everything the author was saying, he was not 40 like him. Reading it again now, he was much more touched by it and felt like he understood it in a different and much more personal way.

When asked about the omnipresent element of sadness in the songs he writes for all his project, Haber explained that all his heroes and the people he admires are sad. He finds a lot of beauty in sadness and believes that writing about the hardships he faces is the only way to come to terms with them. Trying to erase everything bad in one’s life, blurring it out and pretending that it doesn’t exist – much like many people do in today’s over-positive world – is no solution. How did the project come together?

The images were acquired from Nadim Tabet, a director and filmmaker Haber has been working with for the past 15 years. He is the director of both The Bunny Tylers music videos for It Seems It All Disappears and One of These Days. The images used by Haber for I Stutter When I Speak of Love and Death are from Tabet’s upcoming short film titled Le Liban en Printemps. Haber’s music is to be reworked and used as the soundtrack for the film. The harmony between the two artists is apparent. Haber even says that they both have a love for melancholy, aesthetics and the aesthetics of melancholy. If you’re in Beirut and didn’t catch him live at Reunion or Mina Image Center, you’re going to have to wait till September. If you’re in Europe or planning to visit sometime soon, make sure to keep an eye out on his page as he will be stuttering about love and death there in October/November.

Haber plans on spending most of this year in the studio, making music for his solo projects, The Bunny Tylers and Good Luck in Death.

Bunny Tylers fans, you’ll be happy to know that Haber and Tabbal are working on a new album. I had the honor of listening to one of the tracks and trust me, you have some major eargasms to look forward to. – Haber believes that the only fun facts about him right now are related to growing old. Hard to take that seriously when you look at him and see this thin man dressed in black from head to toe, covered in tattoos, with a lipstick stain on the white wall behind him.

– His friends hate him because his superstitious habits rub off on them. Next time you find yourself knocking on wood, look around to see if his spirit is somewhere near you.

– In a parallel universe (or, hopefully, in a few years), Haber is a published author. That’s right, he writes prose.

– He studied Banking and Finance at uni.

– No more parties for him because he now sleeps at 11 pm.