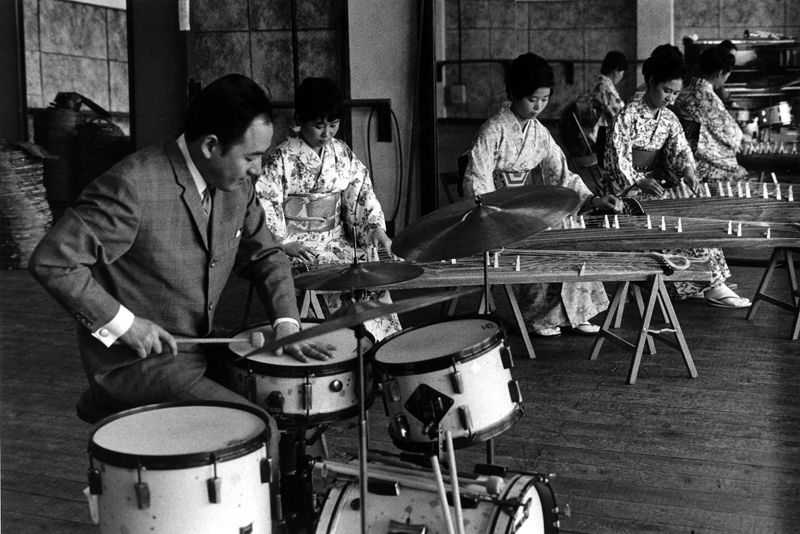 How Japan Came To Love Jazz: 10 Pioneers Of The Japanese Jazz Scene

We often think of jazz as this very American thing but it’s been a very international music from the very start. After WWII, the floodgates seemed to open a bit for jazz across the Pacific. If you go back to an economic reason, there were thousands of American troops stationed in Japan who wanted live music, who wanted to be entertained. There were musicians among them, but they weren’t enough to actually fill up a dance-hall orchestra or club so they would hire Japanese musicians. It was one of the safer kinds of employment, at least for people who had some musical talent at all. Basically, the Army gave them stock arrangements: ‘Learn these! Play these!’ And that’s really where they would go.

In the 50’s and 60’s, Japanese musicians started standing out internationally, with pioneers such as Toshiko Akiyoshi and Sadao Watanabe. However, they did struggle to differentiate themselves within American audiences, as certain Japanese jazz musicians would start looking for particular Japanese references in their music. Hideo Shiraki, for example, did a record in 1961 with a koto player on a couple of songs. Four or five years later, he went to Berlin and played a concert with his quartet and three female koto players.

This was a sensation, and people were really crazy about it, because it seemed to be this nice fusion. Akiyoshi, on the other hand, did it for different reasons; she was thinking more of building a book of compositions without relying exclusively on traditional Japanese instruments, or timbres, or themes, which still got her noticed.
Without further ado, here are 10 pioneers of the Japanese jazz scene:

Nanri was a jazz trumpeter nicknamed the “Satchmo of Japan” by Louis Armstrong. He was one of Japan’s first jazz musicians to become known outside his native country. A long-standing prestigious music award “The Fumio Nanri Award” was named after him. Nanri formed the first term of Hot Peppers in 1946. He then formed the second term of Hot Peppers with Hana Hajime (ハナ肇 Hana Hajime), Toshiyuki Ichimura (市村俊幸 Ichimura Toshiyuki) and some musicians in 1948.

Nanri suffered a sudden onset of optic atrophy in 1953 and nearly lost his sight. He nevertheless came back in August and played with Louis Armstrong on December of that year during the latter’s visit to Japan. Nanri played with Bobby Hackett, Clark Terry and some musicians at Trumpet Workshop to the memory of the late Louis Armstrong in 1971. Nanri always played Dixieland jazz in a straight line, however he was engaged upon bebop for a period of postwar time.

Toshiko Akiyoshi is a Japanese jazz composer/arranger, bandleader and pianist.
She has received 14 Grammy nominations, and she was the first woman to win the Best Arranger and Composer awards in Down Beat magazine’s Readers Poll. In 1984, she was the subject of a documentary film titled Jazz Is My Native Language. She published her autobiography, Life with Jazz, in 1996. In 2007, she was named an NEA Jazz Master by the U.S. National Endowment for the Arts.

Akiyoshi’s music is distinctive for its textures and for its Japanese influence. When Duke Ellington died in 1974, Nat Hentoff wrote in The Village Voice about how Ellington’s music reflected his African heritage. Upon reading this, Akiyoshi was inspired to investigate her own Japanese musical heritage. From that point on, she began composing with Japanese themes, Japanese harmonies, and even Japanese instruments (e.g. kotsuzumi, kakko, utai, tsugaru shamisen, etc.) Her music remained planted firmly in jazz, however, reflecting influences including those of Ellington, Charles Mingus, and Bud Powell.

Yōsuke Yamashita is a Japanese jazz pianist, composer and writer. He is praised by critics for his unique piano style, which is influenced by free jazz, modal jazz and soul jazz.
Since the late 1980s, Yamashita’s main group has consisted of Cecil McBee (bass), Pheeroan akLaff (drums), and often Joe Lovano (saxophone).

Yamashita performed on a burning piano in 1973 when asked by Japanese graphic designer Kiyoshi Awazu to be the subject in his short film, Burning Piano. Thirty-five years later, clothed in a protective firefighter’s uniform, Yamashita repeated the performance on a beach in western Japan, playing jazz improvisations on a piano which had been set alight.

Shiraki was a Japanese jazz drummer and bandleader, best known for his work in the 1950s and 1960s. Famed earlier on for hard bop, he later explored world music and became a pioneer of fusing traditional music forms with jazz structuring. He studied percussion at the Tokyo School of Fine Arts and, during this period, played with Masashi Nagao’s Blue Coats.

In the late 1950s and early 1960s, his quintet was popular in Japan and was associated with the “funky boom” craze for hard bop. Hidehiko “Sleepy” Matsumoto, Terumasa Hino and Yuzuru Sera all passed through his quintet.

Ryo Fukui, a self-taught pianist released his own take on some of the most classic jazz standards, stunning Japanese audiences. Critics and fans alike were reminded of the modal masterpieces of McCoy Tyner and his distinctly powerful style. Fukui stayed true to his form, electing to perform jazz standards in his own unique manner. While his music lacked the classical sophistication of Bill Evans or the wild personality of Miles Davis, it accurately and succinctly blends jazz influences from multiple eras.

Meshing hard bop, modal and cool jazz influences, it maintains an atmosphere of majesty, serenity and peacefulness. Although Ryo Fukui didn’t break any new barriers, his original tweaks to classic standards set Scenery aside as one of the finest jazz records of the decade.

George Otsuka, whose real name is Otsuka Keiji, was born in Tokyo in 1937.
Drummer by profession, he started playing with “Hidehiko Matsumoto Quartet”, led by Sadao Watanabe, and gained popularity between 1961 and 1964. Between 1965 and 1969, “George Otsuka Trio” was formed, recording numerous masterpieces, including “Page 2 (tact)”, that won a Jazz Disc Award. That same year saw the subsequent collaborations with many artist overseas, including Roy Haynes.

Suzuki decided to play double bass, after seeing a concert by Louis Armstrong with Milt Hinton in 1953. He began his career with Tony Tekiseira, later to join George Kawaguchi in 1960, in whose band he also met Sadao Watanabe. In 1962, he became a member of the Quartet of Tony Scott, later to join the Hidehiko Matsumoto Quartet in 1964. Two years later, Sadao Watanabe brought him into his band along with Masabumi Kikuchi and Masahiko Togashi.

He moved to New York City in 1970, and joined Blake’s Jazz Messengers for a year. However, he also appeared with Thelonious Monk, Charles Mingus, Ella Fitzgerald, Wynton Kelly, Bobby Timmons, Jim Hall, Ron Carter and Sun Ra. His return to Japan marked the birth of his band, Grandma Sound, touring internationally after a short while.

Later on in 1972, Suzuki Isao Trio/Quartet was also signed with Three Blind Mice. It included Takashi Mizuhashi, George Otsuka, and Kunihiko Sugano. He has been since awarded the Japan Jazz Price several times.

Born in 1948, Karashima began playing the piano at the age of three. His father was a music teacher at Kyushu University; Karashima attended the same university. He stayed in New York in 1973, but returned to Japan the next year. In 1975, he joined drummer George Ohtsuka’s band. In 1980, he joined Elvin Jones’ Jazz Machine, and stayed for five years, including for tours of Europe and the United States. He then switched to being principally a solo pianist, but also led a quintet from 1988 to 1991. During the 1990s he frequently toured internationally.

Teruo Nakamura (born in 1942) is a Japanese jazz bassist.
Nakamura played in New York City from 1964. In 1969, he joined Roy Haynes’s ensemble, for whom he also produced. That same year, he also worked in a trio with Steve Grossman and Lenny White, who both went on to play on his debut as a leader, 1973’s Unicorn. He also worked with Hubert Eaves, Charles Sullivan, George Cables, and Onaje Allan Gumbs. His 1977 release Manhattan Special reached #19 on the U.S. Billboard jazz charts.

Born in 1941, Sato is is a Japanese jazz pianist, composer and arranger.
By 1959 Satoh was playing in Georgie Kawaguchi’s band, together with alto saxophonist Sadao Watanabe and tenor saxophonist Akira Miyazawa.

In his early career in the late 1960s and early 1970s, Satoh played in a free, percussive style. Satoh played at the 1971 Berlin Jazz Festival as part of a trio; he used a then-unusual ring modulator to alter the sound. He also recorded with Attila Zoller, Karl Berger, and Albert Mangelsdorff. Satoh has written arrangements for recordings led by Merrill, Kimiko Itoh, and Nancy Wilson among others. He also arranged for strings and quartet on Art Farmer’s 1983 album Maiden Voyage.

In 1990, Satoh formed a large group named Rantooga that combined various forms of folk musics from around the world. Early on in that decade, he composed music for a choir of 1,000 Buddhist monks. He was also reported as stating that 70% of his time was spent on arranging and composing, and the rest on playing and recording.