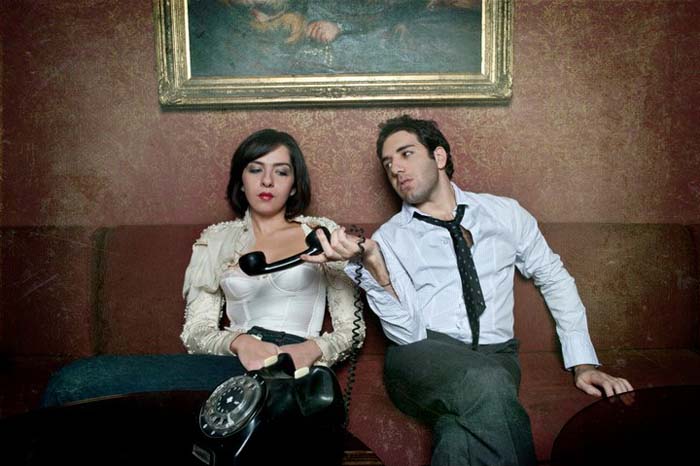 Interview: LUMI and the Great Comeback

Although it’s easy to think it’s all been done before, there’s something new, fresh and exciting about Lebanese duo LUMI, an electro-pop and glam punk band composed of Marc Codsi and Mayaline Hage. Their success landed them a record deal with EMI Arabia after they released a self-produced EP and led them to record their first album Two Tears in Water back in 2008. LUMI are making a comeback and we had the opportunity to interview both members and discuss their sound, the challenges they face, as well as their music inspirations.

First things first, how did you guys get together?

Mayaline: We met some 14 years ago at a jam session at a mutual friend’s place. I was just visiting from Paris and contemplating the idea of moving back to Beirut. I had some music partitions with me, Marc came to me and we started talking…

Your work with Scrambled Eggs was very experimental. In a previous interview, you mention that Lumi was a result of a “song” approach to music. What elements of experimentation did you bring to the electro pop sound of the band?

Marc: What was great with Scrambled is the total freedom we implemented, nothing was structured, nothing was predefined, it was chaos most of the time, but a desired chaos from which an entity would emerge. It’s more a spirit than a style, and this comes from early days when I was a lot into free improvised music. Mayaline was part of that scene too, she used to perform with a mic and do weird and abstract sounds with her voice.

I always kept this affection for chaos, experimenting with sounds, and flirting with boundaries but with Lumi I tried to incorporate those elements in a more structured and melodic way.

That influence is even more present now where we have for example a few songs that are almost 10 min long.

How has your music evolved since you first began playing music together?

Mayaline:  Lumi came out initially as an ‘abrupt’ and kind of festive musical expression that was appealing to us at a certain period in a certain context.
Ten years ago was a period of great excitement in the rock and electronic scene, that excitement inspired and motivated us in that way.There was a certain form of rawness and partying and resisting energy that existed as well in the Beiruti society that we were part of. Add to that our age, the rage and powerlessness we were feeling regarding the political and security situation, the horrid and absurd 2006 war during which we felt the urge to create… all that could explain the first Lumi sound.
We then separated for a long time to meet up a year and a half or two years ago. We didnt know what to expect from our new collaboration; i think we didn’t even expect to collaborate again, but we did. It’s like we were both in parallel tunnels and we met at the end somehow. After a few months of fumbling, the music started coming to us. What we wanted to express became more and more clear, as well as the way we’d chosen to express it. The beauty of it is that without communicating for years we met up again with a clear content to be told.

Marc: It continuously evolved. The first phase was pretty experimental and lo fi, then it got more pop by the time our full length album came out; I was influenced by the 60’s production pop music that I found unrivaled. Today I think we went back to something more intimate and more urgent, the world is changing very fast, and it’s becoming harder to fit in it.

Rock is deeply rooted in the pop sounds of LUMI.  What music elements are you yet to explore and what do you have your eyes on for future?

Mayaline: Well the nature of our current project gives us yet a large margin of exploration, our first upcoming gigs will allow us to test our sound in action and continue to evolving it. Even though we already have an album material, we’re still composing and are eager to explore and continue pushing boundaries. You have to keep it alive! 🙂

Can you name 3 artists that mainly influenced the LUMI sound?

What has been your biggest challenge as a band? Have you been able to overcome that challenge? If so, how?

Mayaline & Marc: Lately the big challenge, and it was an intentional one that we have put as the basis of our work was: how to create and play music live, being just us two, without the assistance of any playback device, computer or other musicians and without letting those choices limit the music itself. This made us push many boundaries and demanded a lot of sustained work. The result of that work is what we are presenting live now.

You grew up in Lebanon. Do you think growing up in a country with so many contradictions affected the way you write?

Mayaline: Of course, and for obvious reasons. It was maybe particularly true and obvious in 2006-2008.

And it’s certainly present at a deep level in each one of us as well as in our daily lives. But today I personally tend to create a space for creation, and inner space, and I can watch how it interacts with the outside world and do songs about it.  But I’d like to think our music is not just the result of us being Lebanese or living in Beirut or whatever. There’s definitely much more to it.

Marc: For my part, I feel there is a chaos around us, that transmitted in all I do. When something is too clean, it doesn’t feel right. There is also this element of layers,  nothing is what it looks like, if you dig a bit you ll find something else behind it.

What was the first album/E.P you bought?

Mayaline: Maybe a Metallica, Slayer or Gun’s and Roses tape 🙂

Marc: Bad by Michael Jackson (I actually stole it so maybe it doesn’t count)

Revolver is obsessed with lists, and more recently with album suggestions. Can you give us the top 5 Albums You Grew Up Listening To?

Mayaline: Well From 9 to 13 years old I was mainly listening to Nirvana’s Smells Like Teen Spirits and In Utero, Pearl jam’s Ten, Guns and Roses’ Use Your Illusion 1 and Metallica. Then at the age of 13, I discovered Janis Joplin and Jacques Brel …Later on ( 16-17 years old ) Sonic Youth, Radiohead, Portishead’s Glory Box, Placebo’s two first albums….

Marc: I’m a late comer when it comes to music, when I first started to actually listen to music not just hear it, the ones who got the most plays were:

– Pink Floyd – Dark Side of the Moon.

You have toured in Lebanon, France, Germany and in the UK, can you share the most memorable moment from this experience?

Mayaline: We had so many great moment.. Our first gigs in Paris, it was touching to play there as I lived in France half of my life..  A  big part of me is still there.. Also our whole German experience, several gigs in Berlin with our drummer and bassist at the time, we really felt we were part of this city for a few days. I would also add The madame Jojo’s experience in London, which was really fun as well and the production of our album in Dusseldorf where we lived at Mouse on Mars Andy Thomas for a month.

Marc: Missing the plane to get to SONAR in Barcelona.

The alternative scene in Beirut has changed a lot since Lumi’s beginning. How do you see the future of the scene? Are you a fan of any particular acts in particular?

Mayaline: The scene definitely flourished! I think it’s great, I’m happy to see that the music and art in general found such a fertile place in my hometown. I hope it’ll distract me from the many issues that deeply sadden me about the Lebanese society.

Marc: Indeed, it evolved a lot from the early days. I feel I talk like a veteran now. Things are much easier today, there is a whole bunch of promoters, managers, sponsors, bookers, venues, photographers, designers, festivals etc. The result is that there is an abundance of acts out there, all very talented, but I feel there is less adventurism and activism today than there was with the first generation. We live in such a crazy schizophrenic place, I’d love to see more of that madness in the music.

What advice do you have for people who want to form their own band?

Marc: Don’t listen to your mom.

What’s next for LUMI?

Marc: A first big test with our first concert on Thursday, then others will follow.
A summer to contemplate the idea of recording an album, all the material is there, then a tour in Europe in the fall.

About author: Laura is a 20 year old computer science and applied mathematics student based in Paris. Being fond of photography, she started a personal photo blog in 2014 where she shares pictures from her travels and her random thoughts on things – a visual diary of some sort.