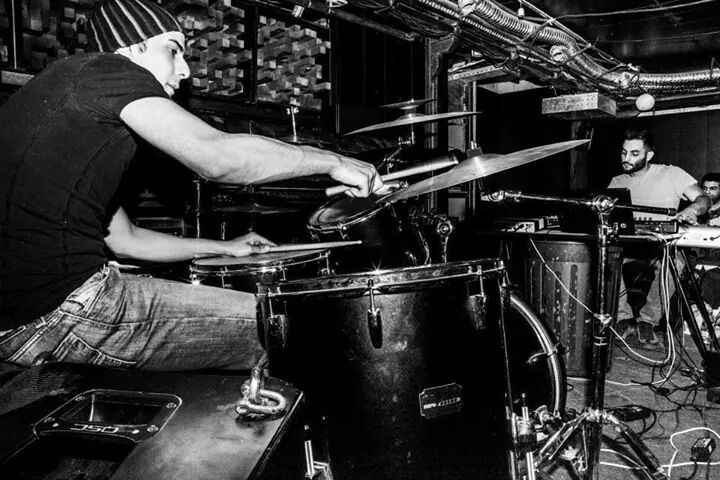 Bunuel’s barber firmly grasping a woman’s head while he cuts off her eye as the viewer witnesses a full moon getting attacked by a cloud that takes the form of a razor. Rival Japanese yakuza members chasing each other in rowdy, neon-filled Tokyo streets. A middle-aged woman, gnawed by overwhelming paranoia, rapidly roaming the South California freeway in her 97 grey Sedan, her husband’s inanimate body lying in her trunk. A perplexed, weary junkie desperately trying to track down his drug dealer in the midst of a Dionysian Berlin rave.

The two-man musical group, led by Patrick Abi-Abdallah and Jad Taleb, anarchically debunks the concept of noise and seeks to create rhythmically and sonically intense music inviting its listeners to give in to the ethereal, often suffocatingly dark atmosphere that it so subtly designs.

Abi-Abdallah’s impressive drumming skills are rooted in his physical prowess, and ingenious efforts at rendering sense to a particular sound that can easily descend into incomprehension – even disturbance. His amped-up, energy-fueled performance is reminiscent of legendary drummer Bob Bert’s work in Sonic Youth’s classic no wave album Bad Moon Rising. Ferocious, yes, but also enticingly unpredictable, Abi-Abdallah’s generous touch is never overshadowed by Taleb’s synthesizer and brilliantly engineered electronic additions. The latter owes his electrifying charm to some sort of unexplainable aura that engulfs him the minute he starts extracting harmonious, often mystical sounds from the machines that surround him; a coked-up (God forbid), post-modern Angelo Badalamenti that seems to have been raised on no wave, post-rock and dark ambient music and who holds an unquenchable curiosity towards blending sundry sounds, perhaps the same curiosity that has driven Aphex Twin to stardom in the early 90s. His melodic accompaniments to Abi-Abdallah’s drums offer a construed array of alienation and dreadfulness but also casts a dadaesque spell unto the atmosphere. If Portishead & Kraftwerk’s Electric Dimension is the quintessential soundtrack to robot porn, then the musical duo’s body of work should be the archetypical companion to a robot-perpetrated apocalypse.

Flum Project’s musical influences are diverse, and not particularly hard to pinpoint: Krautrock masterminds Popol Vuh, cult favorites God is an Astronaut and even pioneers such as Tangerine Dream come to mind; but their signature remains distinct – so distinct it gives its listeners a sense of wonder similar to that of Truffaut’s character witnessing the landing of a UFO in Close Encounters of the Third Kind or a film student watching Stan Brakhage’s Dog Star Man for the first time.

Rocker Patti Smith recently wrote a review of the new Murakami book that appeared in the New York Times, and at the end of it she said, ‘I don’t want to kill myself, I want to see what happens.’ I don’t want the underground music scene in Beirut to kill itself for lack of representation (and ahem, innovation). I want to see what happens with Flum Project, because I think it currently holds the power to save Lebanese music enthusiasts from unwillingly drowning in a sea of monotony and uninspired appropriation (I’m pointing at you, Pink Floyd tribute bands).