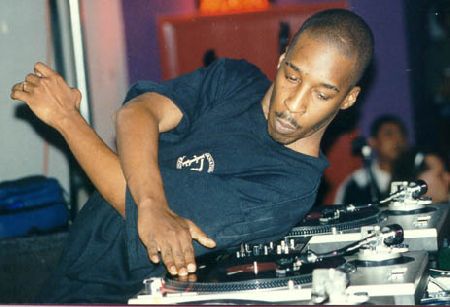 Some people create music as musicians, and some people play music as DJs: but between these two categories is a very special type of DJ, I mean, musician, I mean… Whatever, you’ll see. Scratching is a musical technique which involves the manipulation of vinyl records to the effect of treating them as musical instruments themselves.

I’d like to quickly demystify this little trick and wash away the media-fueled bullshit that has most of you believing that scratching is just some dude wobbling a record and making it go “wiki wiki wiki”. Alright, so you’ve got two turntables and a mixer which receives the sounds from each and… mixes them together. Ok?

Basically a DJ will stop one record using their hand, push it forward (which changes its pitch depending on the speed and smoothness of the motion), then move the mixer’s crossfader away from that turntable, so, when they pull the record backwards to its initial position, the sound of it going in reverse isn’t heard. Thus, you have… specific single notes! Consistent drum hits! Crazy noises! Whatever the fuck your crazy fingers can do!

The  Invisbil Skratch Piklz (or, Invisible Scratch Pickles) were a sort of “turntable band” which had featured various members through the years, including DJ Qbert, Mix Master Mike, DJ Apollo, D-Styles, Yogafrog, DJ Disk, DJ Flare, Shortkut and even A-Trak (one of the dudes in Duck Sauce… You know, the guys who made that Barbara Streisand track a few years back?). They were a group of DJs, each scratching a different element in unison, to create tracks of layered scratches, for example. So one dude would scratch a drum beat, while another would do a repetitive bass scratch, and a third fella would be going crazy on a James Brown vocal sample. You know, typical stuff.

Roc Raida was also a member of a turntable band, The X-Ecutioners, before his tragic passing in 2009… But the reason I’d like to feature him instead of The X-Ecutioners is because Raida had something special to him: he wasn’t just a DJ, he was a real showman and entertainer. In the video above, not only can you hear the guy cutting up a drum beat, but you can actually see him doing some of his legendary body tricks where he scratches using his elbows, forehead, dips his arm under his leg, behind his back, spins around, it’s a real feat of speed and precision.

Cut Chemist is a DJ, producer and turntablist, formerly a member of the latin-funk band Ozomatli and the legendary California hip hop crew Jurassic 5, though he has been touring with them again recently. Today he is active as a solo DJ and producer and has collaborated with various fellow DJs and rappers, most notably DJ Shadow. The above track, Lesson 6, the title of which is a reference to Double Dee and Steinski’s famous collage-style mixes from the 80s known as Lessons, sees Cut mixing and matching various beats and tunes accompanied by his own scratching.

DJ Shadow is more of a diligent studio mastermind than a high octane vinyl slicer, but when he gets his hands on the wax, watch out. He is most famous for his debut album Endtroducing….. ,recognized by the Guinness Book of World Records as the first album to be made entirely out of samples and nothing else. He has collaborated with various artists, from the trip hop group Unkle, which he was a founding member of to Yukimi Nagano, vocalist of the band Little Dragon, and more. The above track demonstrates how he’s a bad ass motherfuckin’ DJ, in case you needed it spelled out.

Last but not least, one of my favorite turntablists, if not all-around artists, ever: it’s Mr. Kid Koala. What makes this guy stand out to me is the way he approaches this whole turntablism thing. He doesn’t just throw on a beat and scratch the same sample on top of it over and over, but instead, he tends to construct tracks based on certain genres, such as jazz, or blues, using any kind of oddball sample that suits it, and scratching almost all elements, from the bass, to the drums, to the horns, guitars, vocals, etc. Heck, his latest album 12 Bit Blues is literally a blues album composed entirely of samples and scratches.  Do yourself a favor and get on this shit.