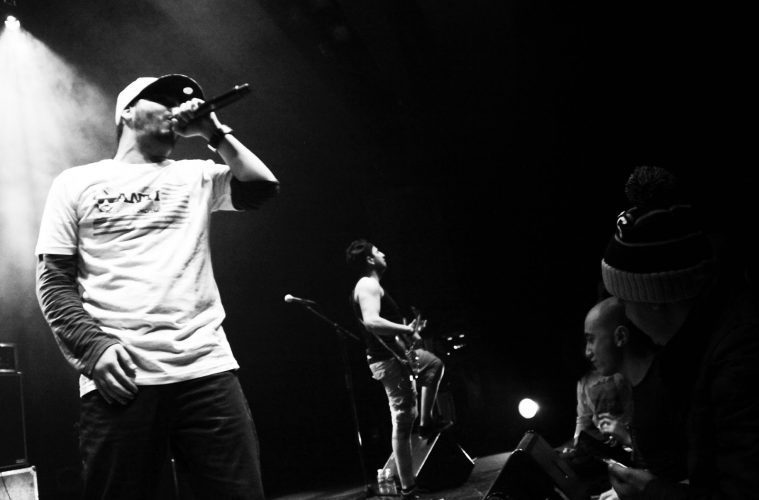 Moroccan Rap: Mobydick and the Art of Extreme Self Consciousness:

In 2011, hip hop was a relatively new thing to Moroccans. Early attempts in local dialect were to a large extent decent, family friendly, monosyllable rhyming of medium length. By the time Mobydick came around however, Moroccan hip hop had begun to take distinct form. Artists no longer needed to rely on radio and TV for exposure, so self-censorship was over. They allowed themselves to use profanity, touch on any theme, and experiment however they liked. Mobydick saw the perfect opportunity to expose his art to the masses and in so, sky-rocketed himself to notoriety.

Mobydick alias Lmoutchou took the local rap scene by storm. He released his third full-length album (DKBA) featuring Freestyle Checkmate, one of his most popular tunes with over 1 million views on Youtube. It’s a 5 minute long, non-stop stream-of-consciousness style ego trip played over a beat by DJ Premier. A complex rhyming structure packed with internal rhymes, uneven phrasing, and a large repertoire of references.

Because Moroccan rappers, including Mobydick, were first inspired by the 90s French hip hop scene, they originally wrote in French. The local dialect, Darija, was never really tested to its full limits. Rappers like Don Big and bands like Hoba Hoba Spirit all released records in Darija, but until recently, it was never fully explored. This is where Mobydick stands out.

Mobydick grew up in Rabat, and released his debut EP entitled Tarial in 2009. Throughout the following years in his career, he kept up with his reputation of the MC with lyrical skills. Advanced rapping in Darija was his signature, his niche. A typical Mobydick song is a mass of text tangled with complex rhyming schemes, testament to his large and unpredictable vocabulary. In some songs, he keeps the same rhyme throughout an entire verse, hitting you like a machine gun. This is a guy who has pushed the boundaries of what you can achieve with Darija; he basically created a new set of linguistic aesthetics. At a time where local rappers were just trying to discover their range, Mobydick drew a line. “Darija is quite complex, it’s like using a joystick on ‘very hard’ play mode to score the same as someone on ‘very easy’ mode”, he said in an interview. “It is the language of a people who had been underestimated throughout their lives, so it’s only natural they’d develop it to a point that it would resist on its own.”

What Mobydick is mostly famous for is his wide vocabulary, something he often mentions in his rhymes. Indeed, his lyrics are driven by slang, blended and deformed words, metatheses that occur every day in the colloquial language and are then forgotten. “The strength of Darija is being an open source language. It is part inspired from other foreign languages, so you can naturally adopt words for things you can’t translate”, he mentions. “Our problem is that we don’t like local products. It’s usually something international that goes viral. We don’t draw inspiration from what goes on around us, and sometimes sadly resort to simple copy-and-paste”.

Mobydick is now CEO of his label Adghal Records, producing his own tracks and signing artists like Lionbad and Caprice, focusing mainly on old school hip hop sounds. The local rap scene is now a vibrating one, and growing. But as the atmosphere gets saturated with thick 808 backed beats and auto tuned triplet flow, Mobydick and his Adghal posse stand like guardians of the MC aesthetic, an image he often invokes in vivid detail. He gives meaning and depth to the sole act of glorifying oneself, influenced by the East Coast rap scene. That is what makes him relevant to this day, having created the original model for what quintessential Moroccan hip hop sounds like.

According to some, Mobydick is today’s best Moroccan rapper. Others believe his shtick is becoming more predictable. A few months ago, Mobydick released the first track of his newest album Makhlo9 3ajib (Odd Creature), entitled, more explicitly than ever, Ego. This latest single of his came bearing the name of what people claim to be his main vice.

Ego tripping is no novelty to hip hop. In fact, it is how rapping started in late 70s Harlem. The role of MCs within the hip hop culture was to move the crowd and use rhyme to comment on the DJ’s skills, tell stories from their own lives and glorify themselves. Mobydick elevates that concept. He is aware of his chief attribute/main vice, and his response is to hone it, perfect it.

“When growing up in a place that is determined to put you down, I can’t see how one will come out against all odds without developing an enormous ego,” he’s said. “It works somehow like a survival mechanism. Ego is one of the biggest moral questions of our time, and worthy of consideration”. In the grand story told through Mobydick’s lyrics, pride and status are front and center. Ego is not just a theme; it’s the only moral question in life.

Beneath the Marvel & DC and anime references, each of his ego trips paints an incredibly accurate picture of his dramatis persona; a master in the art of extreme self-consciousness. A rebel archetype emerging from a level of awareness a la John Carpenter’s They Live. He is part Marvel antihero, part Keyser Söze style storyteller, with a dash of Deadpool’s cynical humor.

“Even if you haven’t done anything, just going to school is enough to make you experience failure,” he adds. “The world is ugly; we live our lives subject to circumstances and a lifestyle that wasn’t inherently forced on us. Even if it’s just keeping up with an evolutionary mindset, we don’t have to be militarized. References are simply what I retain from a system that tells you upfront you’re not good enough. It’s a way to keep your ego intact, because we need to feel balanced”.

Many are the times that Mobydick has declared that he is the best in the game. Though he’s earned his bragging rights, those claims are there to remind us of the devil we know, our ego. He’s not just another guy rapping about how awesome he is and how awesome his life is; he’s a man with a clear message, and the skills to deliver it like only he can.