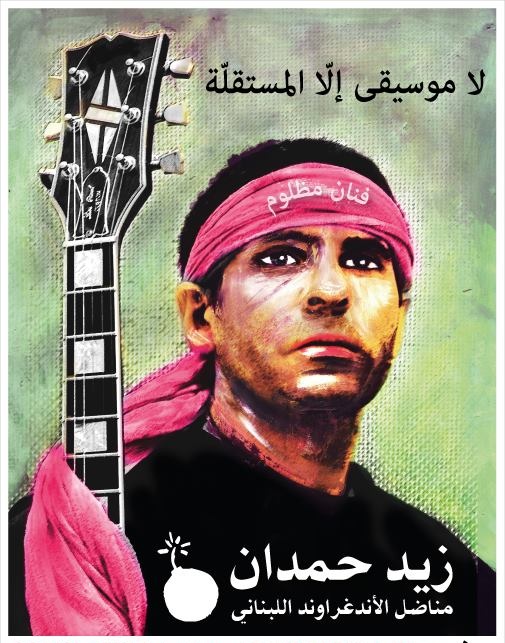 Zeid Hamdan: An Artist Not a Salesman

In an underground venue somewhere in Beirut, I recently got to witness Zeid live. It was his 37th birthday and he decided to put together a gig to celebrate with some friends and fans. With his shy personality and a charming aura, Zeid kept the crowd wobbling in their chairs and moving their feet all night with his classics ranging from the early days of trip hop to the more recent electro pop. Everyone got a CD as well, a best of compilation that merged the entire spectrum of music that Zeid covered over his almost 15 year journey. The CD has intriguing artwork, an illustration of Zeid as a militant with captions such as “Oppressed artist”, “the Lebanese underground militant” and “no music other than independent music”.  But to well understand these captions, one must examine Zeid’s musical journey and the status of the Lebanese underground music scene 20 years after it first saw the light.

Born in Beirut in 1976, Zeid spent almost 6 years in Paris where he got exposed to big names in the Rock business such as the Beatles, the Doors and David Bowie. He then came back to Lebanon in 1992 and launched his first band, Lombrix.

Through Lombrix, Zeid met Yasmine Hamdan. After the band dismantled, the two decided to collaborate and formed “SOAPKILLS”, a reference to a shiny yet awful post-war Beirut.
Drenched with electric waves of melancholy, Yasmine’s sensual voice and Zeid’s minimal electro beats were a perfect match. The band became an instant hit in the Lebanese alternative scene, combining classical Arabic songs with modern tunes, with their music labeled mainly as trip hop. They released 3 albums:  Bater (2001), Cheftak (2002) and Enta Fen (2005).

The Government or what became later as The New Government saw the light in 2004. By 2005, Zeid and Yasmine had decided to go on their own separate paths, so Zeid turned to The New Government (name given after the 2006 turmoil), releasing their first EP. They later released their first album in 2007. “The New Government’s ‘Party Animals’ is a 6-song eruption that confirms this band’s standing at the pantheon of the Lebanese rock scene.” described Ziad Nawfal.

A happy accident: In 2006, Zeid met Kandia Kouyate, a 17 year old kora (aka African harp) player from Guinea and together formed the Khanjha Kora-ShiftZ duo, combining reggae and hip hop with electronic music.

Their first concert took place in the “Nuits Métis” Festival after the singer that was supposed to take the stage with Zeid couldn’t make it. The duo was an instant hit and continued to perform over the next 2 years in Guinea, Algeria and France. In 2009, ‘La Guinea was released, a compilation of 10 songs recorded between Guinea and Algeria.

By the time Zeid decided to do his own songs, he placed an ad for backup singers and soon enough Zeid and the Wings was born around 2010. The band plays a mix of reggae, Arabic folk, rock and electro and first saw controversy with their debut single: “General Suleiman”, a politically obscure message to the president of the Lebanese republic. The band released its first full album, ‘Asfeh’ in 2011.

A young talent from Egypt, Maii Waleed is the former drummer in the heavy metal band: Nail Polish. She took up Arabic writing and made music for short and feature movies.  Maii met Zeid in 2010 in Cairo, and the two decided to collaborate, releasing their first album, ‘Moga’, in 2013. Twirling around dreamy-pop, indie rock and new wave, ‘Moga’ offers a new unique sound unprecedented in both Zeid and Maii’s musical journeys.

Alongside these projects, Zeid stands behind some big names in the Lebanese alternative scene like Katibe5, Kazamada, Dani Baladi, Hiba Mansouri. He was, for a short period of time, the man behind the music label: Mooz Records, an independent label that brought together other big names in the Lebanese music scene (Soapkills, The New Government, Scrambled Eggs, Lumi, RGB …).

On a small balcony in the heart of Beirut, we met Zeid and had the chance to get to know him better. ”First of all I’m a songwriter”; he said when we asked to define himself, “I think I’m best at writing songs, and then because I never found producers, I became my own producer, and because my production had some success, I became a producer for other people.”

Although Zeid Hamdan is baptized as the father of the underground music scene in Lebanon, he never wanted to be so.  “I always wanted to be a popular artist, I always wanted my music to reach maximum people but it never happened. That’s why people labeled me underground, because I’m a self made artist and until today, I still play in underground venues and I still address underground crowds but I’m really hoping my music reaches the maximum people and I hope one day, my music becomes mainstream. There’s nothing bad in being mainstream as long as you do honest and powerful music.” He adds, “I’ve never had a group of people to market me really well, so maybe if I had if I had this team of people around me, believing in my art, maybe I would’ve been more popular but until now, I’m still shooting my videos with my phone, with my camera and still producing myself alone. And when you are alone, as much as you do, you can only go so far. And today, I still have limited reach. It’s also related to the media here, there’s no space for my style of music on TV or on the radio, you open the radio, there’s not one Lebanese artist playing. If you go to France, or to the US, there is my music.”

Although, it’s been a struggle, Zeid keeps his head up and his spirit high. “I’ve never asked myself ‘why am I doing this?’ I always did what I wanted, I’ve always been free, and I never sold my music to anyone. I’m the owner of all my rights, and this freedom has a cost. I am my own boss. As long as I’m proud of my music, I shouldn’t worry if I’m reaching or not. “

Zeid is on Soundcloud, do check it out: https://soundcloud.com/zeidhamdan