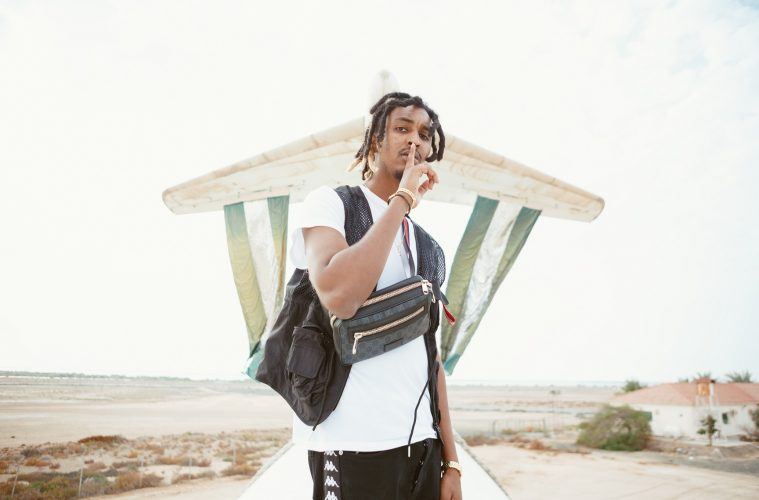 The Unusual Birth Place of Arabic Drill: Interview with FREEK

Finally, a new sound to underground. Gone are the days of robotic techno, where DJs sit face down in front of a crowd. Hip-Hop wants you to feel something, anger or pride it’s about dealing with reality, not escaping it. Where else to inaugurate such sounds than the Middle East?

FREEK, AKA Mustafa Ismail, is originally from Somalia but was born and raised in the UAE. As one of the few rappers dominating the Arabic Trap scene, FREEK has also introduced us to Arabic Drill. Although this artist might hold his electric guitar like a machine gun and rap like a true OG, FREEK represents his hometown Abu Dhabi. His ideas behind his music is anything but violent. His love for the UAE, as the place that brought him opportunity, remains strong along with his hopes for a peaceful Middle East, free of conflict and poverty.

While a catchy line from his track ‘Wala Kilma’, “I don’t need exposure ya habibi srofli check” was stuck in my head. FREEK’s sense of humor and friendly personality is evident in his lyrics and work. True to his sound this rapper is ready to take his vision international!

How did you get the name FREEK?

Before getting into music, when i was about 12 years old. My friends used to call me that as a nickname, because I used to skateboard. It was different, they weren’t used to a black skateboarder.

Although you’ve never lived in Somalia, how has Somalia shaped you or your music?

Where I’m from shapes me in different ways – coming from a background of struggle resonates in my music when it comes to pain and the whole hustle. My dad came to the UAE in the ‘70s, everything was from scratch for all of us. We weren’t golden fed. So Somalia in that sense gave me that past and history to use in my music.

Even though I was born in the UAE I don’t really sound like someone who has lived in this luxurious lifestyle people think they know.

And your friends? Were they from similar backgrounds?

I knew people that were privileged, and I knew many different nationalities. But it’s not about the money here, it’s about how you grew up. And whether you took advantage of the opportunities given to you.

What opportunities has the UAE given you?

Being here gave me connections (they are childhood friends) but I got to be around people who were exposed to different ways of life. In a third world country like Somalia, I might have not been able to own my own camera and start shooting.

Do you think your first big opportunity started with owning your own camera?

Yes, it definitely affected my image. A lot of people might have this certain image of Hip-Hop being yachts or cars – but for me knowing how to use a camera gave me a platform to think about how we are as individuals. I had time to be in the streets, and to think about what colors to use in certain frames or videos. It really affected how I wanted my music and image as an artist to be.

Arabic Drill is a relatively new term – how would you define this genre in your own words?

It has this Heavy-Metal-angry-and-aggressive feel that you can sense in the energy of the crowd of some of my shows where people start pushing each other.

Does rapping in Arabic come with benefits or challenges?

It comes with challenges in a way, that as Arabs we always affiliate Arabic music to emotional ‘habibi’ music, it’s always been about love songs. And as soon as you start doing something else people can look at it in a negative way, in a religious or cultural context. It tends to have that effect. All eyes turn to you.

Singing in Arabic is also an advantage because people really feel it – if it’s in English people are like yeah okay cool – but Arabic gives a unique sound, even to English speakers – ‘Wala Kilma’ wouldn’t have gotten anywhere if it was in English.

You mentioned that you loved Heavy Metal while growing up – do you imagine yourself experimenting with another genre after Arabic Drill?

The trends are always changing. People loved dubstep a few years ago, now it’s not the case. As an artist you always have to think, are you gonna die with your genre or move on?

You’ve mentioned the Hip-Hop scene in the UAE is growing – what is needed for it to thrive?

To be honest we don’t lack anything we just need to do more music and attract more people to the shows. We have quality sound recording studios, and we have a platform to perform, there aren’t a lot, but it’s enough.

We can organize our own shows, but we just need more people to come to them. Most of the views are coming from Sudan, Saudi, Libya and the UK. There are so many people into Hip-Hop here as well, but the population isn’t as large. I don’t think I can solve the population problem here, but we have enough to work with.

What do you think the Arab music world needs most right now?

We need to be touring in the Middle East – we need someone or an entity to help us do a full Middle Eastern tour. We have so many fans in places we can’t reach or perform to because of politics. Especially in countries that speak my own language and like the same music as me. I get messages on Instagram from guys in Palestine or Yemen. It’s crazy, because I know I might never see this guy at one of my shows. Even though you hear of hardcore fans in Ramallah who say, ‘fuck it’ and risk everything just to go watch their favorite rapper. Music has the power to do all of this.

I would like to tour the UAE, then go onto Saudi, Egypt, Lebanon, Libya, Morocco, Jordan…etc. We can get different acts as long as we have a budget from a big brand – and trust me, we can then bring in the numbers.

When it comes to music, Arabs love each other, sharing music is way beyond politics, it’s so natural. All the artists here are good friends, and everyone just keeps shutting down shows. If it was like anything in Europe and its Schengen, where we can move between countries easily…We are capable, someone’s just gotta do it first.

What would you call the tour if it were to happen?

I don’t know, I just know I won’t call it some lame-ass-cliché name. Or use the word ‘Arab’ in it. Because people will start looking at it in a political way.

Are you trying to speak out for any minorities in your music?

I feel like a lot of people feel the same way I feel, but they are too shy or don’t have the guts to say it. I’m just a voice to those people. Could be anyone, rich or poor. Sort of what like they did in the States, I’m just doing it here.

In the states? Why what did they do?

They brought the common way of speaking, slang, into their music. It wasn’t the norm to do so. But once you start singing the way you would normally speak, it resonates more with people.

I never heard someone rap the way I speak – so i thought why not develop this and use it in my music, in the same exact dialect but with a drill beat. I always saw music as a copy of something else. The guitar, the beat and the rest are just accessories you try and figure out along the way.

You’re a funny guy, with a great way of connecting with your audience – How do you maintain your identity without pushing the boundaries? Will your humor ever get political?

My comedy comes from the stories I hear from people close to me, I just represent it in a way that is 80% comedy. I know many people who will say things just because culture tells them to, even though they don’t mean it. I tend to pick on that.

I try my best to stay away from politics and religion, we don’t have much of a choice over here. Anyways it’s not my place, they are bigger people to do so. Who would you like to collaborate/or sing about dead or alive?

Bob Marley. Because of his freedom message to the world. He was so against politics, I thought he would be political, but I realized after watching his documentary he wasn’t a political person at all, he was sick of it all. He just wanted people to love each other, and did concerts for free. Everyone showed up and just had fun.

Does underground music exist here in the UAE? If yes, what genre do you think is dominating the scene?

What defines underground anyway? Maybe underground is something that’s coming up and still new. There is definitely a scene here and a good community of artist. We just have to be true to our sound.

What really gave me a boost to pursue music is seeing how Mashrou’ Leila, 47 Soul and Omar Souleyman did tours – I’m such a big fan! Look at Omar Souleyman for example, he is the best example of a Bedouin going international! His shit is so authentic, and he didn’t give a fuck of what people think, there is no fakeness in his music.

What has been the most challenging part of being an artist so far?

My passport has been the biggest issue. I have a fucking Somali passport, it’s a difficult fucking situation. I can’t travel around and cancelled a show in September in London because of it.

Can you list three songs that helped shaped you throughout your life and why?