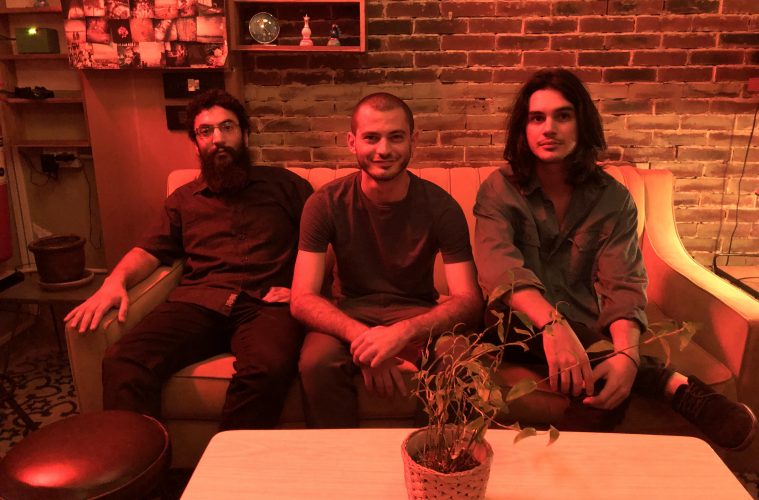 It’s a Monday evening, I walk into Tota with my colleague from work who volunteered to pose as a photographer. We sit and chat about the absurdity of life, waiting for the band members to make their entrance. A few minutes later, they walk in and my friend photographer asks them to strike a pose on the yellow couch as he tries to capture their essence in red-themed pictures. When the photoshoot is over, we move over to the cozy smoking section where the voice of a girl behind us will serve as background noise as she tells her friends about her outrageous date.

I stare at the candlelight reflection on the band members’ faces while they take breaks between joking around and answering the questions. It’s time to give you a seat at the table so here’s a little slideshow for you to enjoy while we scooch over and let you in on the band’s deep, dark secrets.

Taxi 404 is a band formed by Amin (vocals), Andy (vocals/guitar) and Hanna (drums) almost 2 years ago when Sofar country director, Maria Antoun, saw Amin’s solo poetry project and invited him to perform at the next Sofar. He had less than a week to put a band together and get all prepped up. He and Andy were childhood friends from back when they used to live in the Ivory Coast and they had met Hanna not too long ago at jam sessions the three together used to go to in Monot. They formed the band that would then be known as Taxi 404 and, although they didn’t prepare much, given the time restriction, the concert went really well so they decided to perform live again and again. They did shows at Radio Beirut and Riwaq before taking a gap year when Amin had to travel to France for his studies.

When he came back, they reunited and gave the crowd at Institut Francais (in collaboration with Haven for Artists) a taste of their French poetry and intriguing beats. The September Sofar show was their second stop, and also the place where I heard them play and decided to feature them on our series of Acts You Should Catch Live In Lebanon – the result of which you are being subjected to right now.

P.S: Please don’t call them a French Rap band. They’re much more than that.

When asked this question, the three guys looked at each other and laughed. They then explained that the name was picked kind of randomly. The 404 comes from Error404, which is sort of a reflection of how their band came together: by mistake. Taxi is there to document their everyday taxi rides. It also fits so well with 404. And that’s how Taxi 404 was born.

The first item on their list: be less lazy. They’re also working on an EP they’d like to record and release. They already started composing and have a first draft of the logo. They’d like to create a phenomenon, more than just another album. They want the audience to be split between two reactions when hearing their songs: either ‘WTF is this?’ or ‘I hate this’.

They’ve had people come up to them after a show, telling them how much they loved their performance even though they hate Rap are not so fond of Frenchies. They’d like to keep that going. They’re not making music for a certain audience, they try to explore and experiment with sounds a lot in a way that would attract all sorts of people. This is made possible because of their different musical backgrounds and influences. Their favorite artists include:

As for live shows, they said they’d focus solely on the EP and not do any concerts unless they get invited to the Sofar stage – and they did – so now they HAVE to plan something soon. Stay tuned. – When Hanna first met Amin, he didn’t like him cause he hated Rap.