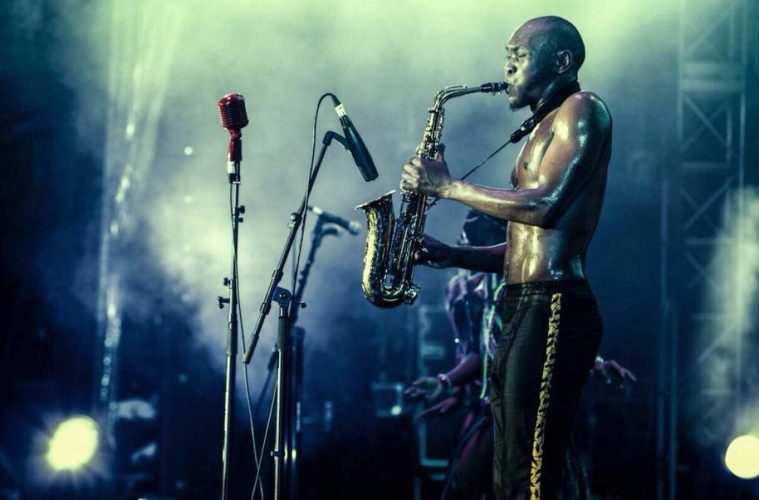 At a time when the line between music and politics is getting thinner and thinner, the impact of some artists on social and political issues is becoming increasingly significant. Afrobeat’s history is deeply rooted in revolution and change, ever since the days of the late Nigerian legend Fela Kuti. It’s 2018, and Kuti’s youngest son Seun released his latest album “Black Times”, recorded with Fela’s original band Egypt 80. The album, as Pitchfork put it, “forcefully drives home the infectious protest power of Afrobeat”. We had a chat with Kuti about his view on politics in music, the message of Afrobeat, and more.

You were born into a musical and of course political household, which has gained global legendary status. Can you tell us first about your first musical memories? When was the first time you realized you are going to be a musician?

Well, I think I always wanted to be a musician ever since I was a kid, ever since I can remember. I grew up around my dad, around all the music being played at the time. I think that being able to go on tour with the band, for me those were my earliest musical memories.

What was it like to start your career following your father’s stature? What was the reaction among the fans when you started playing with Egypt 80, your father’s original band?

You’ve just released a new album titled Black Times. It unsurprisingly carries a lot of political songs and lyrics. What are the messages that you hope to convey with the album?

I just wanna convey a different narrative. Different from the narrative of the elite all over the world, you know. Not just around the black communities and society but all over the world it’s that elitist narrative that is destroying nature and humanity. This is what I wanna change and confront through my record.

What has changed in Nigeria since you have become involved? How do you see the effects of music on politics in locally, but even on the broader African scale?

The effect of music is not only politics, but it’s also in raising human consciousness. It should help us identify who we really are, and what will lead to our innermost perception of ourselves. I think music unlocks that part of our spirit. So i think since I’ve been involved, you know, watching my generation grow, more and more people are interested in our culture and our future. That is I think what has mostly changed for me.

Outside of music, do you have any interest in getting directly involved in politics? Maybe running for election?

I don’t have an interest outside of music at the moment other than my community and how I can help develop it. And whatever that leads to, we’ll go there.

How would you describe the mission and role of Afrobeat in 2018? What’s changed since your father’s days?

I think what has changed is that Afrobeat has become a global movement, in contrast to my father’s days where he was the only one playing. Right now, Afrobeat got people from all over the world to be involved and contribute to deliver the message globally.

The sonic structure is changing with all this technology developing in and around the music industry. Would you consider incorporating some of the more new age sounds in your music?

I consider my music to be of new age sounds at the moment. I don’t see myself doing any more changes in the near future.

Tell us about your downtime, when you’re not making amazing music. What are you doing?

These days, when I’m not making music, I’m playing with my daughter, or reading, or just relaxing somewhere, trying to get my mind together. Meditation is good!

The energy of your live shows is captivating, how do you create that in a studio environment?

Yeah I think the energy from the live shows mostly comes from the music. As long as the music is in the studio, we can always recreate that!

What does the future look like for Seun Kuti? Will your children follow in your footsteps too?

I don’t know what my children want to do man, I only have one child now so let’s see, haha.