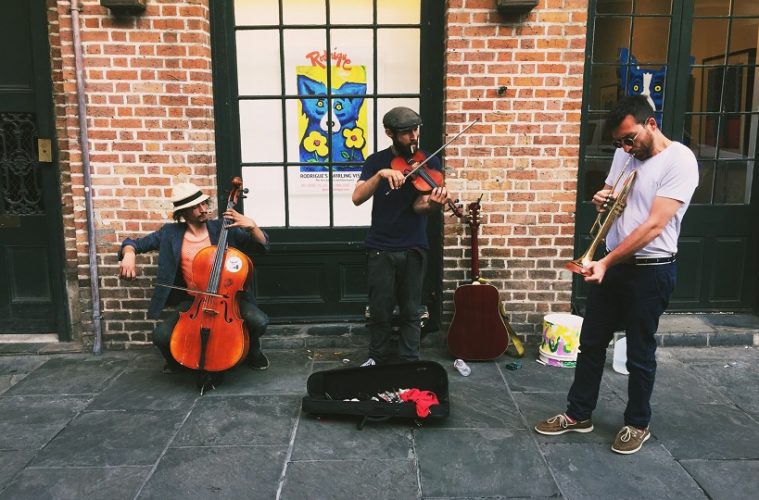 John Lebanon is an indie band based in Providence, RI. Founded by Roy S, MD, the project originally began as a way for the songwriter to cope with the physically and mentally exhausting work of being a medical resident at Brown University. Inspired by the chaos of his new town, he composed and released his first single ‘Providence is Divine’. Sensing he’d come up with something special, the young artist began scouring the city, where he found plenty of eager collaborators. Together, they have released a string of singles and EP’s packed to the brim with catchy melodies and irresistible hooks.

We caught up with the Lebanese born singer songwriter to talk about his life, his music, and other projects.

Can’t help but start with a very original question, but we’re genuinely curious: Why the name John Lebanon?

The name first came up a few years ago when I was jamming with a friend in Krakow. Someone at the bar told me I looked like John Lennon because of the glasses I was wearing, and then someone in the audience yelled “He’s from Lebanon, he’s John Lebanon!” It was a “you-had-to-be-there” kind of funny moment. I started using that whenever someone told me I looked like John Lennon (it happened quite often, more than you would expect).

Years later in Providence, when I got back into composing, I had to choose a new artist name, and voila: John Lebanon! It sounded outrageous. Another Lebanese kid living abroad doing music…I loved it.

My understanding is that John Lebanon doesn’t refer to one person. Who’s behind the team/band?

Yes, that’s true. We all play instruments and bring different skills to the table. Alongside me, there’s Matt and Alex on the keyboard, bass, guitar, and percussion.

The composition is mainly mine, with Matt having a growing role. Kat, Olivia, Ella and Juliette are singers. Laeticia, Noemie, Wheels, and Soup Wizard are also main collaborators and there are many more to come.

What are the biggest challenges you have faced so far as a musician/band?

Honestly, time. Finding the time to record and edit, and especially time to perform live. Interacting with people directly has always been my biggest attraction. You’re based in Providence in Rhode Island at the moment. Tell us more about your story, how did you start writing music and how did you end up in the US.

I started writing music during my teenage years in Beirut… It was a great way to express myself. I did not learn music theory or reading but picked up the guitar at the age of thirteen after my mum got me a classical Yamaha C40 guitar for my birthday. She could tell I was into musical instruments. Then I began by recording on cassette players before moving to editing software like Sonar from Cakewalk during high school. I still want to go back and learn music theory at some point. Our first band was called Heartbeat and we used to play live frequently at a local club. Heartbeat later became Night Shift, then Banana Rockets. We played gigs at B018 Classic and Snatch (two local bars), among other places. With medical school and traveling abroad, I kept my guitar close but did not record anything for five years. I wanted to pursue my medical training in the United States and began my Internal medicine residency at Brown. Soon after Intern year, I picked up the guitar again, finding a need to relax after some tough shifts in the medical intensive care unit. “Providence is Divine” was born and so was John Lebanon.

It must be tough to find time the balance between being a doctor and a musician. What drives you to keep recording?

Well, it’s not tough if you integrate it into your routine. I’ve made it a habit to go to the studio once a week for 2-3 hours when I am not working crazy hours. Things started to get more exciting when I started collecting sounds, samples, images, and drawings from collaborators all over the world. Thinking of the big picture and seeing the pieces fall together is like watching your imagination come to life with every recording session. It’s priceless. Tell us more about your recording process.

It depends, really, but most times we start with a theme/story and build the production around it. I usually start by playing the guitar or the keyboard while writing lyrics and making the general structure on a piece of paper. Sometimes I have something to write before the music kicks in.
Garage band is a great tool to put things together and anticipate what potential avenues to explore. I have used the John D. Rockefeller library studio to record audio for sampling and the next step is usually switching to Cubase to curate and craft with a very diverse hardware and sound collection.

What genre are you looking to create and what are your inspirations ?

I would say a mix between progressive, folk and experimental pop/rock; the music is theme-based and the theme drives the genre in a way. It is also genuinely unpredictable like when I was working on “Disco Boi”, I did not think of having any Arabic in it until we had a great oriental jam session. My influences vary greatly, from William Onyearbor to Bob Dylan, Daft Punk, and more. Tell us more about how you and Matt met and started working together?

Matt: I was working as an intern in college about a year and a half before my graduation when I walked in on a mixing session for Get a Cab. My ears actually lit up by what I heard, I mean all the sound qualities that are part of the song are so texturally satisfying and unique. I never caught the musician’s name, but several months later a similar story happened and I caught his name when he was finishing the master with Alex. I was only there for half of the final listen-through, and again I didn’t see him for a long time. It’s funny though, Roy wasn’t a memorable name at the time and I couldn’t put a name to the face, just knew that his song “Get a Cab” was one of the best songs I heard at the studio. I had hardly introduced myself as Alex’s intern. It was when I became Alex’s assistant or partner that I actually met Roy. Alex was fascinated by his musical mind and would tell me ” this guy is something else, he knows exactly what he wants and knows where to place each piece in a puzzle, it’s all in his head somehow.. “. He thought I’d work better with him and learn a lot because he is so unconventional. Also, the hours he would come in would interfere with Alex’s other gigs and teaching lessons. I remember what he said at our last session while we were both observing him doing his magic : ” can you believe this guy is operating cubase like he has been using it for years, and he is also a F** Doctor! ”  We both knew that this was going to work out really well for us and started with BMB, then went to Disco Boi, Propane co, Petit Jean and PGY3.  Anyway, that’s the story, how it began and what we’ve worked on so far, I can tell we’re still in those beginning chapters.

Any advice for up and coming musicians?

Finding your niche is important I guess, something I am still working on. In the end, it depends on what you are looking to achieve, having realistic expectations is important and understanding yourself and why you do what you do. I love listening to my music and can do it all day, you have to start with that I guess. Make something you always want to listen to.

What should we expect from John Lebanon in the future?

In the near future, we’re looking at a single to come out in May/June. We’re very excited about this, as it incorporates many colors and with some jazzy/tribal themes. We’re also anticipating an EP by the end of summer.