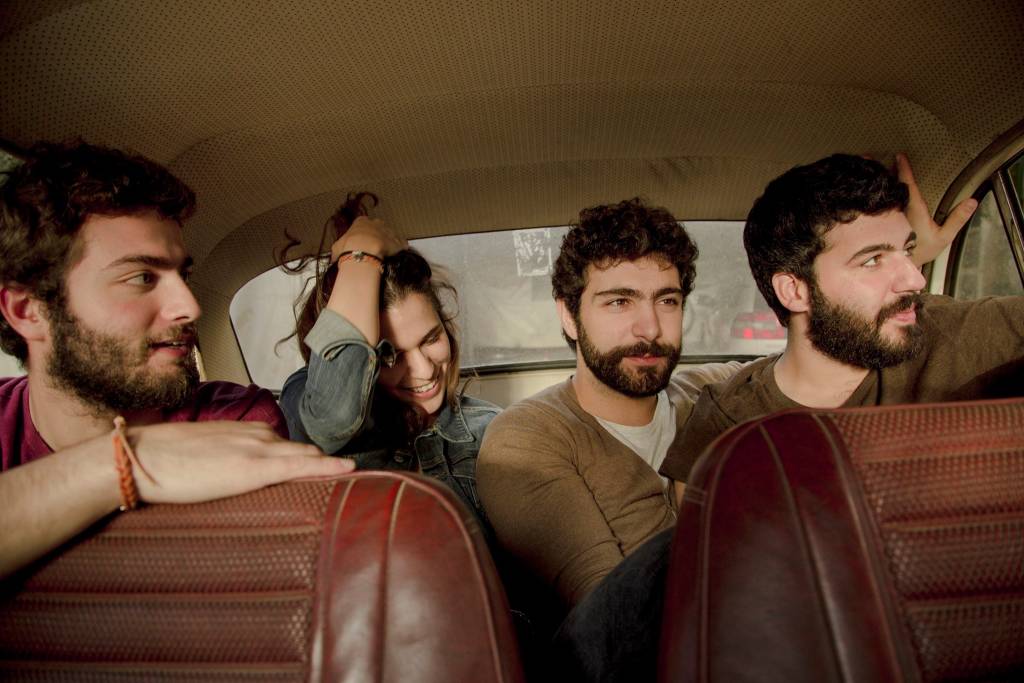 Postcards from Beirut: Interview With The Rising Folk Band

If you’re looking for the likes of Fleet Foxes and Edward Sharpe & The Magnetic Zeroes, Postcards is the band you’re looking for. Postcards is an indie folk band based in Beirut, formed in the summer of 2012 by four friends with a common passion for music. The band is composed of Julia Sabra on ukulele, mandolin, guitar and vocals; Marwan Tohme on guitar and vocals; Pascal Semerdjian on drums, harmonica, and vocals; and Rany Bechara on bass, keyboard and vocals. The band has already released 2 EPs ‘Lakehouse’ and ‘What Lies So Still’ and has been touring around Europe and the Middle East spreading their captivating harmonies and sweet-sounding tunes. On the occasion of their show this Thursday for Beirut Jam Sessions’ winter line-up, we decided to discuss with postcards their role in the Lebanese indie scene, their musical influences, and future plans to get some insight on how the magic happens.

How does it feel like to be the pioneers of indie folk music in Lebanon? Was it hard to gather fans from this specific scene?

Pioneers is a big word J but yeah it’s not as common of a style as other types of rock or blues here in Beirut… It wasn’t that hard, a lot of people enjoy this type of music, and our first EP was pretty easy on the ears, so we did get a loyal fan base pretty fast.

How has your music evolved since you first began playing music together? (What Lies So Still is mellower than Lakehouse)

It’s evolved quite a bit as you may have noticed. The change between the 2 EPs was for a number of different reasons, but most importantly because we spent the last 2 years listening to A LOT of music. It was our producer Fadi Tabbal who actually sat us down and gave us the first chunk of music to listen to, mainly folk artists from the 1950s til today so we could get to know our style more. From then on, we listened to everything from folk to rock to surf to ambient to dream pop to whatever you want. And this had a huge influence on our writing process and the way we wanted the 2nd EP to sound.

Describe your tour in Portugal with three words.

What are you most excited about when you visit new cities on tour?

Honestly, we’re excited about everything. Touring has allowed us to discover some really beautiful places, but mostly it’s about the people, may it be the crew that works with us or the audience, it’s always the best part to connect with people from all around the world and play our music for them. Most of the time after the show we just hang out and have a drink with everyone.

Very honestly, where did you enjoy performing the most?

Portugal definitely.. It seems that Portuguese people love indie folk/rock, and a lot of our favorite bands are huge there, like Beirut or the Fleet Foxes or Beach House (sidenote – we played the same venue that Beach House played in 2008 in Portalegre!). So it’s very easy to connect with them and they’re very enthusiastic about music.
If we had to be specific, our favorite concert so far would be in Viseu; we played in the courtyard of an old museum with incredible acoustics, it was an open-air concert and a full house!

Where do you dream of performing one day?

There’s not really a particular place, but we’d love to be able to tour the US. Right now it seems so far away (and so expensive…) but so many of our favorite artists come from Seatle/Portland/Chicago, and we love traditional American folk, so it would be great to someday perform there.

What drove you to work with an animator for your song “Walls”? How did it contribute to the feel of the song?

Initially we just wanted to try something different with the video (i.e to not have our faces appear in it..) so we thought a lot about animation. Fortunately, we’re good friends with Marilyn Haddad, and she was so enthusiastic about the project that she immediately was on board to work with us. She actually started working in March of this year (the video was published in September). It’s cool because in a way it’s her interpretation of the song, which is very much about loneliness and alienation within a relationship, and Marilyn saw it as a man shipwrecked on an island, alone with his thoughts and hallucinations, and we really liked that.

The dreamy artwork for your new EP “What Lies So Still” looks like a painting from the impressionism period, could you tell us more about why you chose to have such a cover?

We’re glad you asked! The cover is a combination of the works of two talented people. It’s actually a triple exposure photo by Rachel Tabet, and the design & editing (to make it seem like an impressionist painting) was done by Youmna Saba (who also happens to be an incredibly talented musician, make sure to check out her music!). One of our friends actually analyzed the relationship between the cover and the music of the EP, saying that the cover represents the music; they’re both multi-layered and dreamy, so that’s how we like to think about it, even though we weren’t conscious of that when we chose this concept.

Could you name your top 5 musical idols that influenced your sound?

If we had to choose 5 for this EP, it would have to be Fleet Foxes, Other Lives, Beach House, the Walkmen, and Vashti Bunyan

What’s the next step on the Postcards’ to-do list?

Next step is more writing, touring in early 2016 – and potentially taking over the world. Or just Portugal.