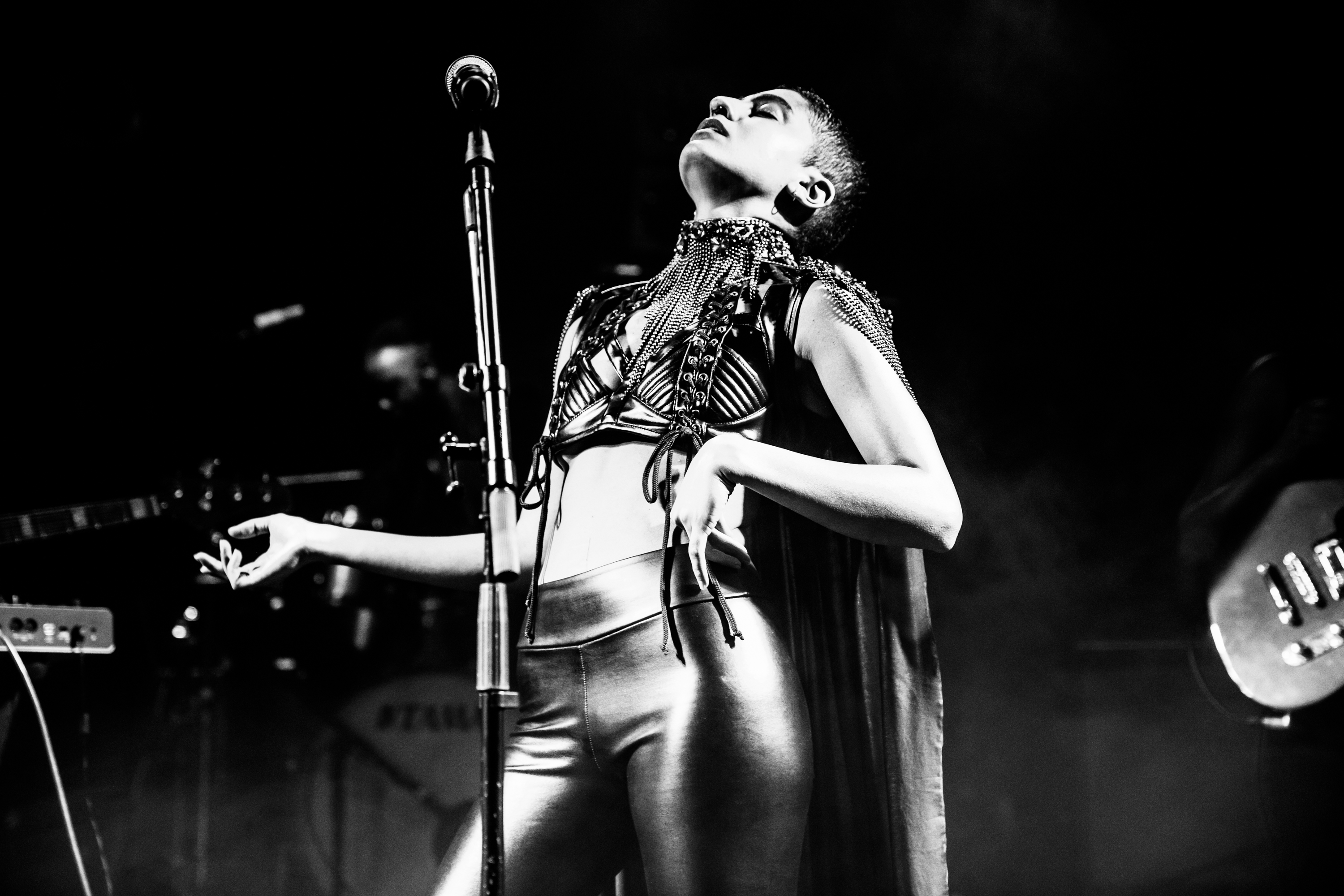 Juliana Yazbeck is an artist from Batroun, Lebanon who was born in New Jersey, USA, to asylum-seeking parents who fled the Lebanese Civil War. She moved to Lebanon in 1993 where she grew up before choosing London as a new home where she could find herself, her sound, and her identity.

Melting English & Arabic, Jazz & Tarab, meditative sounds & poetry all into one big pot that is her music, Juliana really is an artist making her way to the top while proving that she deserves to be on everyone’s musical map.

We had a chance with her and spoke about her influences, her performance at Electric Ballroom (London), her quarantine routine, knocking on doors and so much more. Read all about it in the interview below

Who is Juliana Yazbeck? How do you define her as a person and an artist and where do you draw the line between the two?

It can be difficult for me to separate the two. In part, my art is who I am. It’s deeply personal and something I was born with. But I also have a tendency to measure my self-worth through my professional achievements. So I consciously practice getting to know Juliana the person, listening to her and holding space for her, as well as nurturing her, by doing things that are non-work-related. Spending time with close friends and spending time alone are my safe zones to keep myself grounded and somewhat separate from ‘the artist’. Overall, I’m much more quiet and introverted than I am on stage or in the workplace.

Your music style is quite unique and the way you explain it makes it very relatable to many Arabs. What artists or music practices would you say helped shape your sound?

I landed on what became ‘my sound’ when I realized I was looking for music that no one had made yet. I longed for this sound that was contemporary and ancestral, spiritual and political, meditative and empowering, and when I could not find it, I made it myself. My practice at large mainly comes from a place of need. If it feels necessary, for myself and for the collective, then it’s right. Then it’s worth making and releasing.

In terms of artists, I grew up listening to everything from Um Kulthum to Tchaikovsky to Nina Simone to Amr Diab… Recently, I have been listening to Emel Mathlouthi, Seinabo Sey, A Tribe Called Red, a lot of Hozier… I could go on. There are so many incredible artists out there whose music I love. It’s this beautiful connection we, musicians, share. Listening to music as a musician is different from listening to music as a listener. It’s a common language. As tricky as the music industry can be, musicians as people are just amazing. We are the modern-day magicians of the world, and together we are a wonderful community of healers and truth-tellers.

You performed at Electric Ballroom not too long ago; what was the most memorable moment you had there and why?

Before Electric Ballroom, the largest crowd I’d performed to was around 400 people. No one prepares you for what 1500 is going to feel like. I walked out onto that stage and was hit with an energy I’d never experienced in my life. I could hear people screaming my name. The raw energy in the room was crazy. Instinctively, as a performer, you level up at that moment and unleash your ‘big’ energy—the energy you always knew was in you but never had the chance to inhabit. That was definitely a moment I’ll take with me from that night, though there are many others. The whole experience was unforgettable. I can’t wait to see what 5000 and 10000 capacity feels like!

How are you dealing with the whole lockdown situation? Do you have a quarantine routine?

Lockdown actually has me in my comfort zone. I’m swimming around in my feelings, surrounded by my plants, writing music and lyrics, feeling grateful to be safe and alive… A true Pisces. But within that, I have my own daily structure. I’m self-disciplined, so whenever I’m not on tour or in the studio, like right now, I have my own routine. I usually wake up early, say a gratitude prayer, have my green tea, work out, shower, and start working. I’m able to dedicate most of my time to creative work like songwriting, lighting design, working on a video concept, etc. because so much is on hold for the time being. The artist in me loves that kind of work. But some days are still more business-heavy. Overall, I’m just grateful to be alive and healthy every day.

If you could listen to one album only for the rest of your life, what would it be and why?

I’d rather listen to no music for the rest of my life than just one album. I’ll just sing to myself forever. When it comes to singing, the possibilities are endless, so a lifetime is barely enough to explore them.

You turned your Instagram into an online safe space on March 26; can you tell us about that and how it went?

Sometimes, as an artist, you doubt your value in times of crisis. You think, “How can I help in a tangible way? What am I contributing during this time?” But I recently learned that art is what keeps people alive and sane, especially during times of crisis. As soon as lockdown hit, there was a frantic scramble to get concerts online. It was so noisy. I sensed a collective overwhelm and anxiety, so I decided to offer the opposite: peace, quiet, sanctuary. So my Instagram live stream was not a concert, though I did sing, mainly calm meditative songs from my album (such as “Aqef fi Beirut” and the intros to “Alihat” and “Little Home“) as well as improvised healing melodies. It was wonderful. You could actually hear the silence of every single person who had entered the live stream. We all felt so calm and welcomed in that space, myself included. I generally try to listen to the collective energy and to my energy, see what we really need, and offer that. In this case, it was a safe space.

Writing songs VS performing live, which one do you enjoy doing the most and why?

They feed each other. Like if you’re just on tour perpetually, I find that drains your creative energy. On the other hand, when you create new music, the best feeling ever is sharing it with the world and performing it for audiences. So I’d say a nice healthy balance between the two is every artist’s dream.

Do you ever find yourself self-censoring when writing songs? How do you avoid that?

Not so much anymore, but I used to. The first step is to notice it, which I became very good at. From there, I would acknowledge it, thank it for its concern, then tell it to go away and let me finish. I keep writing until I know that the song I’m working on is 100% me. When it’s ready, I know it’s ready. Something just clicks, and everything feels in alignment, and I think:

“That’s exactly what I want to say.”

Identity is very important to you, especially as an Arab female artist. What’s one piece of advice that you’d like to give to artists out there who are struggling with the same or similar problem trying to get a foot in the door without having to compromise what they stand for?

Firstly, I want young Arab creatives to know this: our identities are so significant only because we live in a white supremacist patriarchy. I would love to just be seen as a person, to not have my ethnicity and gender at the forefront of everything I do, every album review, every press appearance, every award nomination. Like, nobody sits down and asks Lewis Capaldi or Justin Timberlake, “So, how is it for you being a white man in the music industry?” They get to be an individual, plain and simple, not a spokesperson for an entire demographic. We don’t have that privilege, though we should. Never forget that that’s why your identity is important.

Second: watch out for gatekeepers. They may think they hold the keys, and they will try to convince you that only they can open certain doors for you, but in this big big internet world, who even uses keys anymore? All the doors are up for grabs, and anyone can access them. Gatekeeping is dead. Jump the fence. Ring the bell. Or better yet… build your own house with your own door and watch them come knocking instead.

What does the future hold for Juliana Yazbeck?