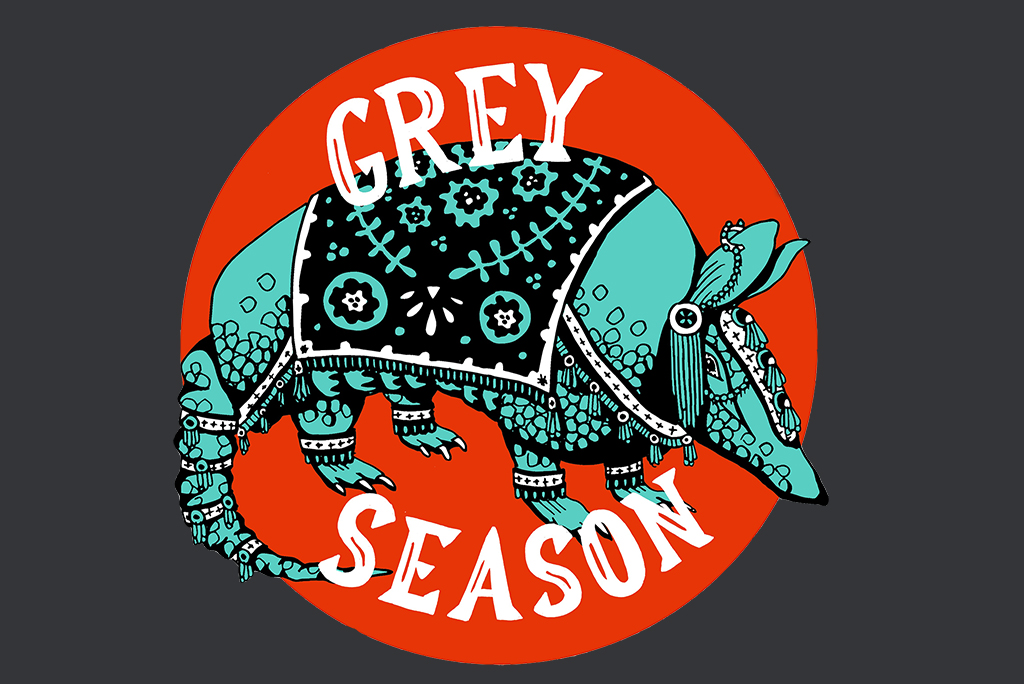 Waking up early on a typical hungover Sunday becomes half as bad when it’s a beautiful day outside. When you end up seeing a brilliant performance by a band like Grey Season, you forget all about last night, and start drinking some more. And once you hear the second best version of Mama You been On My Mind (trophy goes to the late Jeff Buckley), you know you discovered something really interesting.
I determined to have a chat with the band, and learn more about their inspirations and maybe steal some time with that armadillo. The band will be playing Bonnaroo Festival in a few weeks, and I will definitely be catching more of their performances in Massachusetts.

I’ll get that question out of the way: why the armadillo?

That’s “Troilus” to you! Troilus is our pet armadillo (actually). He’s got a shell to protect him from the harsh world around him. If only all of us could have such a thing!

You worked with producer Benny Grotto on your first album Time Will Tell You Well. How was the experience?

Benny saw us playing a show at the Middle East in Cambridge back in fall of 2013…we’d been slogging around for a year or so, and when he approached us after the gig and suggested the thought of doing an album together at Levon Helm Studios, (his friend Justin Guip was the house engineer at the time, and a good friend of Levon Helm) for us, it was like one of those mythical events from days of old where an angel ambassador comes out of the sky and hands a young band the golden egg. We are all such fans of Levon & his work with The Band, that to go record our debut album; our “statement”… in such a hallowed studio was among the best week of our lives.

Benny told us he loved our live sound, our live vibe- and that his only goal was to capture it on record. We played all the instrumentals live in Woodstock, NY at Levon’s barn-studio and then did vocals at Benny’s Mad Oak Studio in Allston, MA. Hopefully it comes across on the record.

Are there any new music elements you would like to explore? Should we expect a shock à la Newport Folk Festival for the band?

Growing up in the 21st century, all the kids our age know that being a fan of all kinds of music is a given- everybody’s into everything, cause everything’s at our fingertips. So when we go to write and cut our new material, we’re going to be doing what comes naturally; what we’ve listened to all of our lives- we’re not into shocking people- it’s got to come naturally and it’s got to feel right- if it shocks people, that’s got nothing to do with us. Who knows- but you can probably expect us to be playing various blends of rock n roll, folk, country, and shit like that for years to come.

What are some of the biggest challenges you are facing right now as  a band?

Finding time. Time to grow personally, and as friends. Time to rehearse. Time to record. We’ve lived together for 3 years and relationships can get complicated in that dynamic. When you live with your band- and the workload of shows and business gets heavy- it can tough to NOT lose sight of your friendships, and of the band that you fell in love with the first time you played together. You end up running on faith, and that can get tough when things don’t solve themselves as quickly as you’d like.

What is the dynamic between the band members? How does the songwriting in Grey Season work?

Right now we’re undergoing a change in dynamics. The way the band formed, Jon Mills’ songs are the cornerstone, the building blocks of what we are- Grey Season started out as a trio, and later Ben and Ian joined- and for the past 2.5 years we’ve been playing songs that were in the originals trio’s arsenal. Now, Ben is bringing songs to the table, as is Ian, and obviously Jon- and it’s changing the way we all write songs. Among the three songwriters- we all feel that without Matt Knelman and Gooch Bloniarz, our songs wouldn’t hold up. They are the musician’s musicians. They know how to arrange, craft, and paint over a song like nobody else. Someone might bring a song to the table, but by the end of the session- it’s not the songwriters’ song anymore- it’s a Grey Season song. I don’t know how many bands can say that. In this way, the songwriting is truly a 5-way collaboration.

The way that Gooch’s mandolin and organ parts weave in and out of Matt’s layered guitars, or the cacophony of strumming between Jon’s rhythm guitar and Gooch’s banjo- against the hard driving rock of Ian, Ben & Matt’s rhythm section; it’s what makes our sound notable…we think so anyways!

All bands have really embarrassing stories that happen while gigging and recording, can you share a classic Grey Season moment with our readers?

Ian had to piss after trying to park the car for 45 minutes (stuck in traffic), and ended up in a jam, where he had to jump into the backseat and piss into two empty coffee cups…filling one up, switching it out for another, and then missing the target in the process, all while the band was busy sound-checking a few blocks away. He showed up with a few minutes to spare…

Revolver is obsessed with lists, and more recently with album suggestions. Can you name some Albums You Grew Up Listening To?

Iron & Wine’s The Creek Drank the Cradle , The Band’s Brown Album, Rolling Stones’ Exile on Main Street, all Beatles albums, Bob Dylan’s Blood on the Tracks, and of course hundreds of others…however these are some that still hold up at the top of the list for us.

How do you see the future of folk?

Having nothing to do with folk as it was for the past hundreds of years. “Folk” in the mainstream has become pop music disguised in country and acoustic instrumentation. Folk music means different things to every culture- but it’s nearly impossible to talk about now. As Father John Misty put it; if you studied folk music from say, 1900-1975, and projected what it might be like in 2015, you wouldn’t have picked what people are calling it now. It (in many examples) has completely lost touch with its source.

Grey Season are on the below:

All photos taken by Revolver.