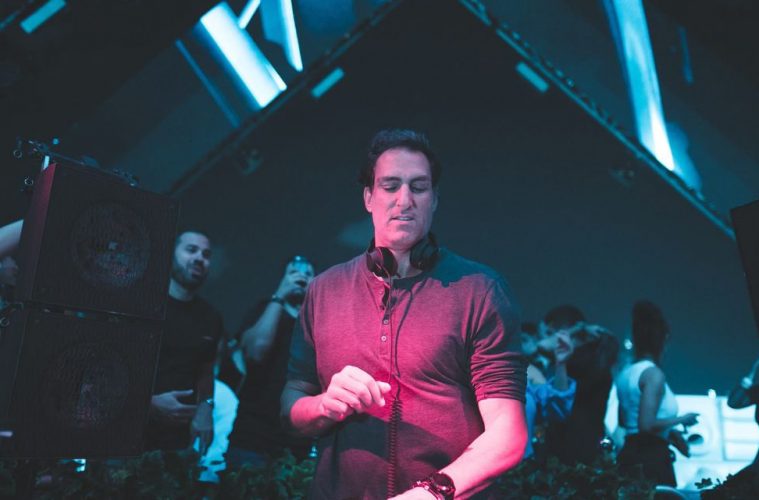 After retiring from an impressive career in Basketball at the NBA, Rony Seikaly made it a point to come back to music, rediscover his old passion and take it to the next level.

Beirut-born, the now DJ and music producer has been on a successful streak of producing tracks, mainly revolving around House, Deep House, Tech House and Techno music. Seikaly debuted his musical career in 2010, with the release of his EP House Calls, which was followed by a series of releases, in addition to a full mix album in 2012, titled Nervous Nitelife Presents: Rony Seikaly. It is safe to say that Seikaly’s career in music is skyrocketing, as he is headlining at major clubs in big party cities such as Ibiza, New York City, Los Angeles, Miami, Toronto, and Beirut.

His intriguing switch of careers, and unshakeable drive to make music lead Revolver to watch a recent documentary made on Seikaly (linked at the bottom), and also conduct an interview with the rising producer, to get an even closer look at his world.

By Maia Khouri and Maria Sakr Your latest basketball documentary video had a huge impact and went viral very quickly. Congratulations! We often hear non-US players struggle to make it, in fact, you were one of the first. What were the main problems you faced along the way? Do you think things have changed now?

I think the biggest thing was being from a different country, it was such an American game, and for somebody with my background, to break through was probably the hardest thing for me. That has changed now, not only are there a lot more foreign players in the US, but NBA players are now vacationing in Europe, everyone’s on Instagram and cultures are more connected. Back then things were so different back then, all you knew was the city or culture you were from.

What role did your NBA career play in your music career? Did the exposure you had gained through basketball help you as a DJ? Or hinder you?

A complete hindrance, and I’m still fighting that today! When I first started DJ-ing, it was an uphill battle of ‘what does this guy know about music, he knows nothing about DJ-ing, he just wants to be in the limelight’. When I finally made it, people were like, ‘the only reason he made it is because he’s an NBA player’ – so it’s been a no-win. Now, however, it’s definitely turning a corner. People need to understand that success is not handed to anyone. In order to be successful, there is a lot of work being done in the background, whether it’s making or producing music. I’ve learned not to pay too much attention to what people say. How did it all start? When and what made you decide you wanted to be a DJ?

I’d always DJ-ed for my friends and always had a club in my house! In 2005/6, Erick Morillo, who at the time was one of the biggest DJs in the world, came to my house and kept listening to me and coming over to the DJ booth to be like, whose mix is this? and I would tell him that it’s mine. Over time, we became friends, and he said, ‘Rony, you’ve got a distinct style. You should be playing out!’ He used to write on his CDs ‘Rony style’ when he was getting demos and playing them out. I have a personal style which I’ve always stuck to.

We have to ask this. As a Lebanese, did our oriental music play a role in your career?

I was exposed to oriental and classical music by my parents as a young kid, they always had classical music blaring at the house, so I definitely think all this exposure played a role in my music, but I also grew up loving Barry White and Disco, so I went from Disco to House music which is basically what House music is – a continuation of Disco. What does your creative process look like? What is the main element you look for when building a track from the ground up?

Even though I don’t play an instrument, I make all my music myself. Every single note is played by me, but by ear. I know what sounds good, so I just play the music I feel is right. When I start out a track, sometimes I’ll have a certain riff that comes to mind, and I’ll start playing the chords or the melody, or a drumbeat or something, then I’ll add a layer to the bass and then some melodies etc. I don’t have just one way to work; once I hear something, I get inspired. Could be a vocal, a riff, a melody, a bassline. Then I build around that.

We are witnessing a wave of rising DJs and Producers, what is your take on that? What tip would you give hopeful up and coming artists trying to break through?

I think the biggest mistake is trying to be someone else and playing music other DJs are playing. Other DJs are famous for their style and their trademark. If you try copying that person you’re just going to be in the shadow of that DJ. But if you do your own thing and come up with something that’s different, then people start copying you, that’s when you know you’ve made it. You’ve got to cut out the noise and listen to your inner voice. Everyone’s always going to have an opinion on why someone is successful, but the only person who really knows how you got to where you are, is you. It’s very easy to sit there and criticize someone else and speculate how they did it, but the way I look at it, if people are judging you for achieving something big, or if people are talking about you whether it’s good or bad, you must have done something right. Whenever you play in Beirut, it’s like a 24-hour festival revolving around Rony Seikaly. How does that make you feel?

It makes me feel really great because it was a struggle to start playing in Lebanon. If I had cared what people thought, in the sense of whether I knew or didn’t know music, I would’ve stopped playing there a long time ago. They didn’t understand my sound, or why I was DJing. At first, it was just a thing for people to talk shit about me. I’d been playing at my house, and at small parties in Lebanon and it started with word of mouth; people hearing about it and questioning it – why is this guy playing here? I tried playing there a couple of times in the wrong venues, just to see if people would gravitate towards that sound, and it was a fiasco. But I didn’t care, because I always believed in myself. My style isn’t for everybody, but I always believed in my sound and that there was an audience for my style. So over time, I started playing in the right venues, and people came who were open to hearing a different sound to what they were used to. Here, back then, they only had one underground club that played hard and dark stuff, and that’s what people associated electronic music with, and I came along with this groovier kind of music and people just didn’t understand it. It took me a while – it wasn’t easy, but I got through it. That’s why I say success isn’t handed to you – people see the parties we’re doing now and think it was, yeah just because he’s a basketball player etc, but if I didn’t have the perseverance or the strength to continue, I would’ve never played again after those first few gigs. At the end of the day if you really believe in your ideas, and you really work your ass off, something will come out of it. If you’re just looking for fame and fortune and to make money, that may never come, but if you’re doing it for real, because you love it, and you want to do it for yourself, then maybe fame and fortune will follow, if you get lucky and the time is right.

What do you think of the scene in Lebanon?

Now, the scene is as good as anywhere in the world. I think that the Lebanese electronic music fans are amazing, it’s gotten to a level where every DJ in the world would want to play there. A lot of the DJs would tell me that this place looks insane, and now they’ve managed to play there. Everyone wants a piece of that action. It’s almost like the reason we used to go clubbing and why we liked clubbing – there was a dancefloor, people danced, the vibe was tight. It just felt right. In many of today’s clubs, there’s a VIP section, the tables and tickets are too expensive, and you’re excluding the real music fans. That’s why a lot of places like Ibiza and clubs all over the world are suffering, because it’s just too expensive to go. In Lebanon you’re getting what every DJ really wants to play for – having a dance and a good time, and delivering happiness and great music to that crowd.

What is your favourite and most memorable moment as a DJ?

I think the first time I headlined Amnesia in Ibiza. That was so surreal! I’d just got to the top of that food chain pretty fast, to headline Amnesia and have all my friends and everyone around, and in the back of my mind, I’m thinking that I used to come here as a clubber, and now I’m headlining in the same venue. If you’d asked me back then if I could imagine that, I’d have said no way – music was always something I loved doing in my own private space, so to be able to do it there was such an incredible feeling. I kept thinking to myself, I’ve played in the mecca of basketball, Madison Square Garden, now I’m headlining at the mecca of all clubs, Amnesia Ibiza. A pretty surreal moment!