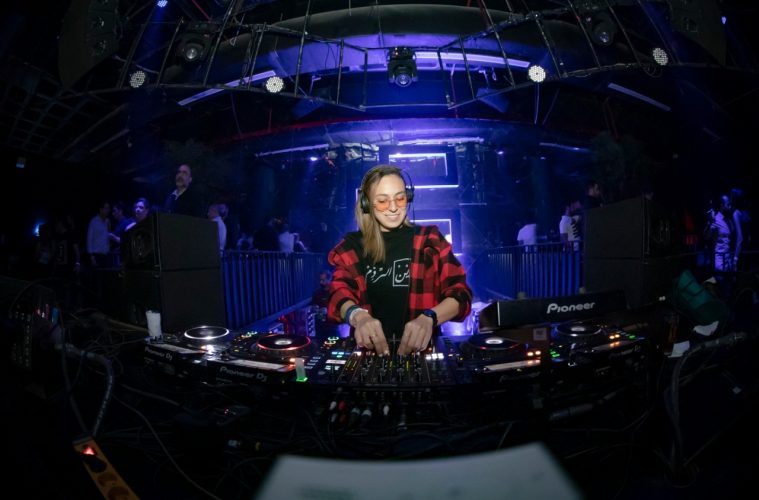 Yara MradNovember 26, 2019
AYN (aka Aya Nasif) is a live electronic producer/DJ, from Amman-Jordan. Influenced by her Arabic roots and guided by her love for western and exotic melodies, she specializes in Techno and Tech-House. AYN’s mixes reflect the human journey in its purest form, taking listeners on musical journeys that keep them on edge. Being an advocate of the universality of sound and its endless dimensions, she aims to unite music lovers despite their differences, encouraging them to break through barriers and to dance, live and love through her music.
AYN’s latest EP I Contact stems from a series of musical experiences through space and time. It’s now available on all streaming platforms (scroll to the bottom for links).
We had a chat with AYN to talk about creativity, Ballentine’s True Music, riding horses and much more. Read through the interview to get to know her.

Can you tell us a bit about how your new EP came together? What were the major influences that helped shape it up?

I Contact stems from musical experiences I’ve lived in different spaces throughout my life. The EP represents a journey through rhythmic progressions and sonic escapes, mixed with voices I’ve heard along the way, seamlessly vacuumed into a world of broken strains. Each of the three tracks tells a story—“Eye Contact” is about silent interactions, “Feels Like” is about unified emotions and “Where It Went” is about sonic escapes.

The major influences that helped me shape this EP where in fact there all along. I dug deeper into my cultural roots and embraced the origins of my being, while actively searching in parallel for unfamiliar musical inspirations, on a quest to seamlessly mix and blend my sonic worlds into one. My Arabic roots made a subtle appearance rhythmically, while my love for deep, techno, and acid baselines triggered my sonic and melodic choices. Vocally, I chose to re-interpret voices and word sequences I’ve heard, in the form of uttered moments and murmured phrases. My sole purpose for this EP was to provide a space through my music for listeners to safely let go and dive into the unknown. To share with them a moment in time where nothing else matters, encouraging audiences to surrender to their thoughts and feelings, and simply be free.

You’re in your studio, getting ready to make your next big hit. What does your creative process look like?

My creative process is all about setting up the right ‘state of mind’, the raw space from which it all branches out. I start off by stimulating my creative flow—I look for inspiration by listening to live sets and watching live performances. This helps me trigger my senses and get the ideas flowing. Once I feel like I’m in the right state of mind, I open a new session and start from scratch. I kick-start with the rhythm section—setting the tempo and beat flow first helps me express the ‘state of mind’ I want to transcribe in the music. I then set myself free into a world of emotions, as I experiment with melodic sequences and resonating sounds. While recording, I try to visualize myself communicating with a live audience—this helps me better envision the musical message I plan on transmitting through the track. You joined Ballantine’s True Music Program (Jordan) earlier this year. What’s your relationship with the program? How would you describe your experience thus far?

I’m the only Jordanian Female DJ who joined Ballantine’s True Music Program (Jordan) earlier this year, alongside a group of talented male Jordanian DJs. Being part of the program exposes me to a diverse network of regional and international music professionals and artists, opens doors to musical experiences and potential collaborations, and features my music through different promotional activations (such as live-streamed recordings and live events) while offering me artist support at all times. For example, earlier this year, I represented the program by attending a series of Boiler Room events in Poland, which gave me the chance to connect with different people within the Polish electronic music scene.

Being a Jordanian female producer and DJ, and focusing on Techno and Tech-House music, in particular, is rather unconventional in my country. Ballantine’s True Music Program in Jordan has certainly embraced my artistry since day one, believing in what I have to offer. They encourage the role I can play to empower other female artists within my community, to break free from tradition and follow free-spirited paths.

Earlier this year, you played alongside and opened for names like Holger Hecler, Emanuel Satie, SAMA’, Christian Smith and DJ Francisco Allendes. Tell us more about these shows. How do you adapt your live-sets?

I am grateful for the different musical experiences I’ve lived at every single one of these shows. Playing with SAMA’ was rather special—opening for Palestine’s rising Techno star was empowering in every way. DJing alongside one of the first DJs to emerge internationally from Palestine marked a culturally-infused musical moment in my journey. I was also particularly humbled by the support and openness I received from the international roster of male DJs I played with at these events. They showed nothing but encouragement towards my music, and the Techno sound I’m building, and showed interest in my evolution as an Arab DJ and producer, regardless of my gender.

How do I adapt my live set before such shows? When asked to open for DJs and producers, the first thing I do is start researching. I dig deeper into their cultural heritage, their music roots, their influences, and their techniques. I look beyond the music to further understand their sound, their purpose, and their soul. That’s when I immerse into mixing a set that truly represents the musical trajectory of the night, setting the mood just right for what’s yet to come. What are some of the challenges you face as a female DJ/Producer in the Arab world?

As an Arab Electronic DJ/Producer, the challenges we all face, whether male or female, lie in the lack of regional opportunities (bookings and overall) and the lack of funding, knowing that mainstream music is still dominantly prioritized by labels, media platforms, and entertainment hubs. I also believe that we all suffer from the lack of infrastructure needed both digitally and on-ground, to easily connect us with one another—which is essential for the growth of the scene and a sustainable community.

On the other hand, as a female DJ/Producer, focusing on Techno and Tech-House, within a male-dominated music scene, I have definitely faced challenges. Performing after hours, and representing an alternative art form, is considered out of the ordinary by our patriarchal society. Nevertheless, some individuals and entities are starting to take a lead on creating more inclusive platforms and supporting female artists. The younger generations are also growing to be more and more accepting, and have gradually yet surely shown me there’s hope in the bigger picture.

At the end of the day, the way I see it is that if you commit yourself to evolving and delivering the art you long to express at the highest standards, and truly believe in what you’re doing, you’re perfectly capable of overcoming any obstacle that might arise. By focusing on personal growth, you eventually get the chance to export your art beyond the confined space you’re in, and such challenges cease to exist. I must admit though, having the support of your close circle of family, friends, and your local community of music lovers plays a key role in pushing you as an artist when times get rough. I am blessed to have such a circle that encourages me to keep going at it no matter what happens. I also strongly believe that their encouragement indirectly instigates a ripple effect within the larger community. By further endorsing my ‘unconventional’ path, they motivate others to do the same.

Correct me if I’m wrong but your performances have been restricted to the Arab world. What’s stopping you from taking your music beyond the MENA region?

Nothing is stopping me—exponential growth is essential for the message I long to deliver through my music. Before playing beyond the MENA region, I’ve made it a point to discover the region and everything it has to offer me musically. The chaotic energy this region suffers from lies at the root of the progressive sound I’m building. Absorbing the pain and suffering, the emotional baggage, the daily struggles, political problems, unstable economies and social pressures and expressing how I feel towards it all, through my music, is what gives my music the soul it needs to survive. Whether in Jordan or beyond, people across the world, now more than ever, need spaces to escape. My role as a DJ and producer goes beyond just making good music. Now that I’ve been connecting with different audiences across the MENA for almost two years, I am ready to export their message to the world, and share music that represents the new generations. If you were to be an ice cream flavor, which one would you be and why?

I’d be a merry cream—a mix of chocolate and vanilla. Why? Because if you can get the best of both worlds, why get one flavor?

I ride horses. I’ve been showjumping since I was a kid. It saddens me that I haven’t been doing so as often, as I have less time on my hands juggling between my advertising job by day and my music endeavors by night. Horses taught me so much… they taught me that we, as humans, are capable of connecting with any other living being, without words, simply through silent interactions and the openness of our souls. They taught me that rhythm is directly linked to breath, and it naturally exists in nature. Jumping above fences required a lot of synchronicity between me and the horse, and a lot of balance and composition on both our ends—which in return instills in me a sense of commitment to practice and evolve, and which I now apply to my music and my production approach, in particular. If you were forced to remix one cheesy Pop song, what would it be and what would you want it to sound like?

The first Pop song that came to mind, is Britney Spears’ “Toxic”. I wouldn’t use all the parts, I’d specifically focus on re-interpreting some of the words such as “there’s no escape”, “you’re dangerous”, “losin’ my head”, and “spinnin’ round and round”. I’d strip down their original melodic formats, to throw the familiar melodies out of their original context, while remaining true to song’s persona. The overall vibe I’d go for in terms of mood and rhythmic feel, is tight yet loose, emotional yet grounded, sexy yet timid. This actually got me thinking—why not remix a not-so-cheesy Pop song? Stay tuned?

What’s next for AYN?

Other than continuously working towards developing my live set and producing new music, I believe now is my time to look beyond the MENA. I’m not only referring to international shows and festival opportunities in different countries around the world. I’m at a stage in my musical growth where I’ve realized that musically evolving on my own is not enough. Reaching out to artists, producers, musicians, and music hubs in different countries for potential collaborations is part of the process. One of my main missions as an artist is to induce cultural exchanges through my music, to further advocate unity through the universality of sound and its endless dimensions. Triggering my creativity by connecting with culturally diverse artists and music professionals, and tapping into new music scenes, is exactly what I need to further achieve my mission. Being open to new musical experiences also directly affects the evolution of my sound as an artist.