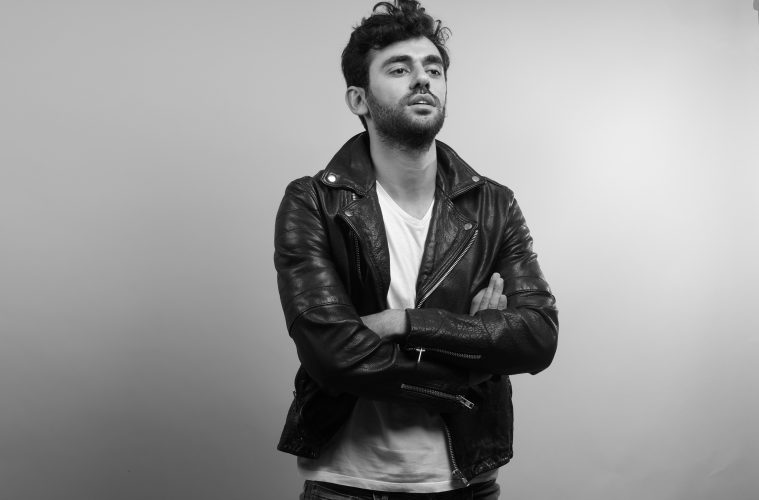 Alan Abi Sleiman is a singer/songwriter and recording artist from Beirut, Lebanon who goes by the name Alan Abi. You probably know him as the guy who’s almost always at Radio Beirut, jamming on stage or smiling in the corner while watching others perform.  After years of experimenting with multiple instruments and genres, he was finally able to shape his identity as an artist by going back to his roots. Coffee in hand and astonishing view in the background, we sat down with him in one of the cozy spots of his hometown, Jbeil. He told us about his experience living and making music in LA, revealed his biggest fear, talked about tap dancing for a living and described the musical journey behind his new track. Read below and enjoy the song, premiering here on Revolver! You seem to disappear every once in a while, and then come back with new music that’s slightly different in terms of style and genre; what can you tell us about that?


Well I live in this bubble, and that’s where everything happens for me: The composition, the writing, the experiments, the party and all… But every once in a while it gets a little too overwhelming that I feel like I need to go out and take a walk, and being someone who’s easily distracted, if I’d stumble upon certain a certain frequency that resonates and feels nice, I’d stick around and vibe to it for a minute, and before I know it, I’m magically sucked into this whole other world of sound that I had no clue existed… And by the time I’m back, sometimes after a while, I’d already picked up enough items and inspiration to add a new color to my craft, like it changed me a bit… Then I’m back at it till it gets overwhelming again that I need another walk.. That pretty much explains the occasional shapeshifting.

You lived in LA for a while before moving back to Lebanon not so long ago. How did this journey contribute to your sound?


Before we even get to the music part, being physically in LA is in itself an inspiration: The city, the sunshine, the vibe, the people… Simply a walk down on Sunset, Venice or Hollywood gives you stories tell, there’s something really special about it… The music I made while I was there was so different and fresh to me that I felt like I discovered another side of me that I never experienced in my comfort zone… Being in the same place for too long can throw you a bit out of phase… Like I said, sometimes you really need to take walk, and this one by far was one of my favorites. You went solo for quite some time, including your comeback to the scene at Oakenfest; what made you gather up a band again?

It’s funny you said ‘solo’. I go by the name Alan Abi and I think of it as a Jack Johnson kind of thing. I am a solo artist/singer/songwriter but sometimes I need a band setting for my songs, most of them have a bit of an electronic sound, but as artists, we are blessed with the ability to express our music in different ways so it depends. When I perform solo, I’m dealing with a laptop, synthesizers, guitars, controllers, okay… it sounds perfectly as planned and I’m in full control, well almost… But there’s something about a live band setting that you cannot experience when you go full-on electronic and it’s that raw, pure energy that the machine is hardly receptive to. I like to refer to it also as the act of ‘decision making on the spot’; If you wanna react to the way the crowd is, sure, in a way you can hit a button or two and twist a knob, but there is no place for vulnerability, at least like there is in a live band, there’s a certain edge to it, It’s like a healthy kind of gambling, so exciting… Plus I grew up in the aesthetic of rock n roll and it’s always going to be in my life no matter what.

It really sounds like I’m saying goodbye, but kind of in a ceremonial way

What can you tell us about your new music?


Well I kinda went nuts in my latest music, way outside my comfort zone that some songs actually don’t have the guitar in them… I’m even playing the piano as a lead instrument on a couple. I also made a few using the most random sounds that I recorded myself (Animals, door squeaks, crowd noise from the streets, there’s one with chants from demonstrations against President Trump in Downtown LA… Now, given that I come from a Middle Eastern area, we have a lot of heritage and history with music over there, so I had to go back and dig deeper into our culture and try to introduce it to my thing, or add my own thing into it, whichever way you wanna see it, without really shoving it in people’s faces, like anyone can snap a tabla on a track or even play an oriental groove on a western drum kit, that’s not really cutting it, at least not to me, it has to come out naturally and you’re not really supposed to hear it so much as feel its presence, and that takes time… But that’s just my take on it you know.

Why did you choose to premiere this specific track on Project Revolver? Can you tell us a bit more about how you built it from the ground up?


Well I’d been messing with this one for the past few days when you guys reached out, it was the right time and the perfect opportunity, so I thank you.

This song is deeply personal and special to me. I was at home, past 2 AM (that’s when the most interesting things always happen) chilling in my studio doing some work when I accidentally made this stagnant, hypnotizing analog drone bass sound using this device from the late 90’s called the Electribe, and it instantly captivated me, so I plugged my guitar and just started telling tales playing the blues, my way, then added some beats and percussion and did a little arranging, I think I was up till like 6 AM cause I really went into a trance on it, even as I heard it later when I woke up. That very same day I learned that the great Rashid Taha had passed away overnight, I was like okay this is something… I had a weird sensation that it happened while I was spun out playing it that night so I wanna dedicate it to him, and it really sounds like I’m saying goodbye, but kind of in a ceremonial way… Just check it out. What is one advice you received but ignored about your music and now wish you had taken?

Excellent question, there’s a really important piece of advice people have always given me but I’m very selfish about it – I’m pretty sure every other artist is when it comes to putting their music out there and want it to sound as perfect as it can be – The advice is to LET GO; I have this huge library of songs that I refused to put out because to me, it doesn’t sound perfect. I was in a mindset that, if I please myself through my music, then I could please anybody… If a track sounds good but not entirely perfect, that’s okay. The more I grow the more I learn that there’s absolutely no right, wrong, or perfect way to do it.

What is Alan Abi’s greatest fear?

Pretty much leaving this world before getting the chance to leave a mark on music. Dream big they said.
Oh and onions. I hate onions.

If you had to choose one instrument to play for the rest of your life, what would you choose and why?

Well I’ve always wanted to be a better singer. The vocal section in my music was never a front and center thing; it’s always been an ornament. So I would choose my throat as the instrument to play for the rest of my life. It’s also the first way we as human beings expressed ourselves, followed by the beating of skins, the drumset – which I adore so… One instrument? You’re probably asking the wrong guy. Say you have the chance to record a song with one artist, dead or alive, who would you pick and why?

I would LOVE to record with Infected Mushroom, and I just wish it’s possible (you know). These people sort of changed my life in a way, they put out this album called Converting Vegetarians in 2003 and it just sounded like nothing I’ve heard before, I believe that is where a lot of my weirdness come from, their music sort of fired up this part in my consciousness and manifested into my music and life, it’s crazy.