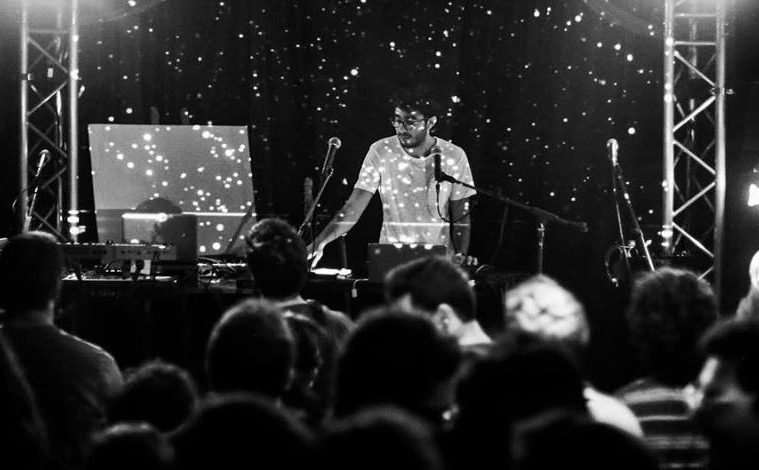 An Ode to Clubbing: day none Interview and Track Premiere

Samir Ghobril aka day none (yes, all lower case) is a music producer from Lebanon. He combines his computer skills with his love for sound by turning bits and bytes into music. He has released 2 EPs: demonstration (2017), which is a compilation of tracks he worked on and performed during his participation in the Dis-covered challenge (a Beirut Open Space x The Grand Factory collaboration); and there’s nothing wrong with me (2018), which is a second musical illustration of day none‘s way of turning 0’s and 1’s into sounds in his own minimal way. Out soon are two new tracks, one of which is premiering right here on Revolver.

To imagine how the interview with day none went, try to picture this: two faces with glasses on, sour drinks on a weekday, dim lights and a low battery phone used as a recorder. We debated ice cream flavors, summoned spirits (not really), spoke to aliens about human feelings, took a trip to Peru and found out what goes into the making of his tracks. Full interview and ‘karantina’ premiere below! What makes Samir Ghobril day none?

A big part of why I started day none was that I wanted to be unfiltered. That’s what the name means actually… You know how you always say, “I’m gonna start doing this on Monday”; day none is the complete opposite of that. It’s just doing whatever you want to do whenever you want, it doesn’t matter. That’s what I want day none to be. I want to just release the tracks I’m making and show, in a very unfiltered way, what I’m doing because everything is so polished nowadays and I don’t like that at all. That’s why I always type in lowercase, for example; this is what I do in real life, there’s not much of a change when it comes to my music. I want a casual, unfiltered vibe and that’s what I’m trying to do with day none.

You have 2 EPs so far: demonstration and there’s nothing wrong with me. I noticed you’re very minimal when it comes to branding—be it song titles or cover art. If you could choose one symbol to represent each of your albums, what would they be and why?

Well, for demonstration, I think I’d choose a hammer; that’s the one symbol I think represents tools or training, which is what demonstration was all about. For there’s nothing wrong with me, I think what’s on the cover art is a good representation of the music: it’s a very chaotic scribble that’s contained within a square… kind of like organized chaos. I think that’s what a lot of people feel they are; there’s this struggle between what you are, what you think, and what society wants you to be and you try to make it work when you have that chaos going on inside you. Whatever you’re going through, it’s fine… that’s what the title means too.

You’re in your studio, working on a new track; what’s the creative process you go through before getting to the final product?

Up until now, the way I do it is that I start with a lot of experimentation. I try out new sounds, mess around, maybe pick up a guitar I would play and then fuck up the guitar piece until I get something really weird. Then, something grows out of it and that’s how the track comes to life. But right now, I’m trying to have a bit more of a conscious direction in terms of what I want my tracks to be because I want to work on more thematic projects. There’s gonna be a bit more of a thought process before I start that but I feel like it’s gonna be the same procedure after that—a lot of experimentation and when I find what I want it’ll just grow from there eventually.

Artists and producers often struggle to find inspiration for new material. What’s the weirdest source of inspiration you’ve recurred to to produce a new track?

I’m not sure how weird this is but I meditate a lot. Many times when I feel like I have a writer’s block or that I don’t know what to do next, meditation for like 10 mins really helps me clear my mind and get creative. I do it every morning and again every time I feel like I need it during the day. You play many instruments, what made you put them down and use machines to pursue a career in music?

I feel like I’ve always been attracted to weird sounds. Whenever I listen to music, I realize that I prefer music that has very unexpected or odd sounds that are processed in a way that makes them different. In a typical rock band setting (guitar, drums, bass), you can experiment with songwriting and chord progression but the sounds are the same… that’s what got me into the production of electronic music. I still play the guitar and the piano but I usually take those sounds and play them differently so they sound very processed. I’ve also always been into technology, ever since I was young, so that also led me to use what I’m good at to make music.

What is your favorite ice cream flavor? If you could compose a song about it, what would it be called and what kind of sounds would you include in it?

My favorite ice cream flavor is lemon and I feel like a good representation of that would be to use an annoying, high-pitched sound—that’s the sourness of the lemon. But, there would also be like a beautiful melody—which is what I feel when I’m eating lemon-flavored ice cream! It’s very tasty and colorful. If you listen to ‘Gosh‘ by Jamie xx, it has this synth feel that just sounds like lemon.

It’s not clean at all, which is what I like in music

If you were sent out to space on a mission to explain human nature to an alien population, which of your tracks would you play for them and why?

Probably ‘there’s nothing wrong with me‘. First because it has a vocal element that’s very apparent in the track, which I feel is the best representation of human emotions. I also sample the movie Submarine with one of the characters reading a letter she wrote. There are a lot of emotions in that track that I believe are important to convey to whatever is out there.
Sonically, the track gives of a feeling of sadness, nostalgia, hope… which is what a lot of us go through and feel.

In an interview you did with Beirut Today in June 2018, you talked about how you want to include more Arabic sounds and vocals in your music. What is the reason behind that and have you started including those sounds in your work?

I feel like a cool way to be unique in the music scene is to show a side of where you’re from.  That’s why I’d like to include more Arabic sounds into my music. I love how Arabic sounds in music; the organic sound of the oud is very raw, real and sandy. It’s not clean at all, which is what I like in music.

I’ve recently released a song called ‘together, alone‘ which does have the sound of the oud that’s switched up and down in different places and I love that about it; I want to do that more often in my tracks. I have this project that I’m constantly trying to work on and I want it to feel like Beirut but I don’t think it’s gonna be out anytime soon. When I do that, there’s definitely gonna be an Arabic feel to it. If you could choose one place, anywhere in the world, to turn into your private concert venue for one night only, where would that be and why?

Hmm… I feel like it would be on a mountain with beautiful scenery behind us… the sunrise which I absolutely love—not the sunset—and I think there would be lots of lights set up all around. They’d be very subtle but they’d create just the right mood. Now if I think of where specifically that would be, I’d say Machu Picchu which is a beautiful mountain in Peru.

What can you tell us about the track you chose to premiere on Project Revolver?

Basically, this summer, clubbing meant to me a lot more than it used to. It got me way closer to my friends and I felt like I needed it way more cause I started working and all that. I’ve been wanting to work on a dance track for a while now… But, when I sat down and started toying around to do that, I was never happy with the result. However, I do feel like this track is just what I wanted. It has what I feel are the best components of a dance track: a mix of beats and groove, of course, but also emotions. That’s what I wanted to come out of it.