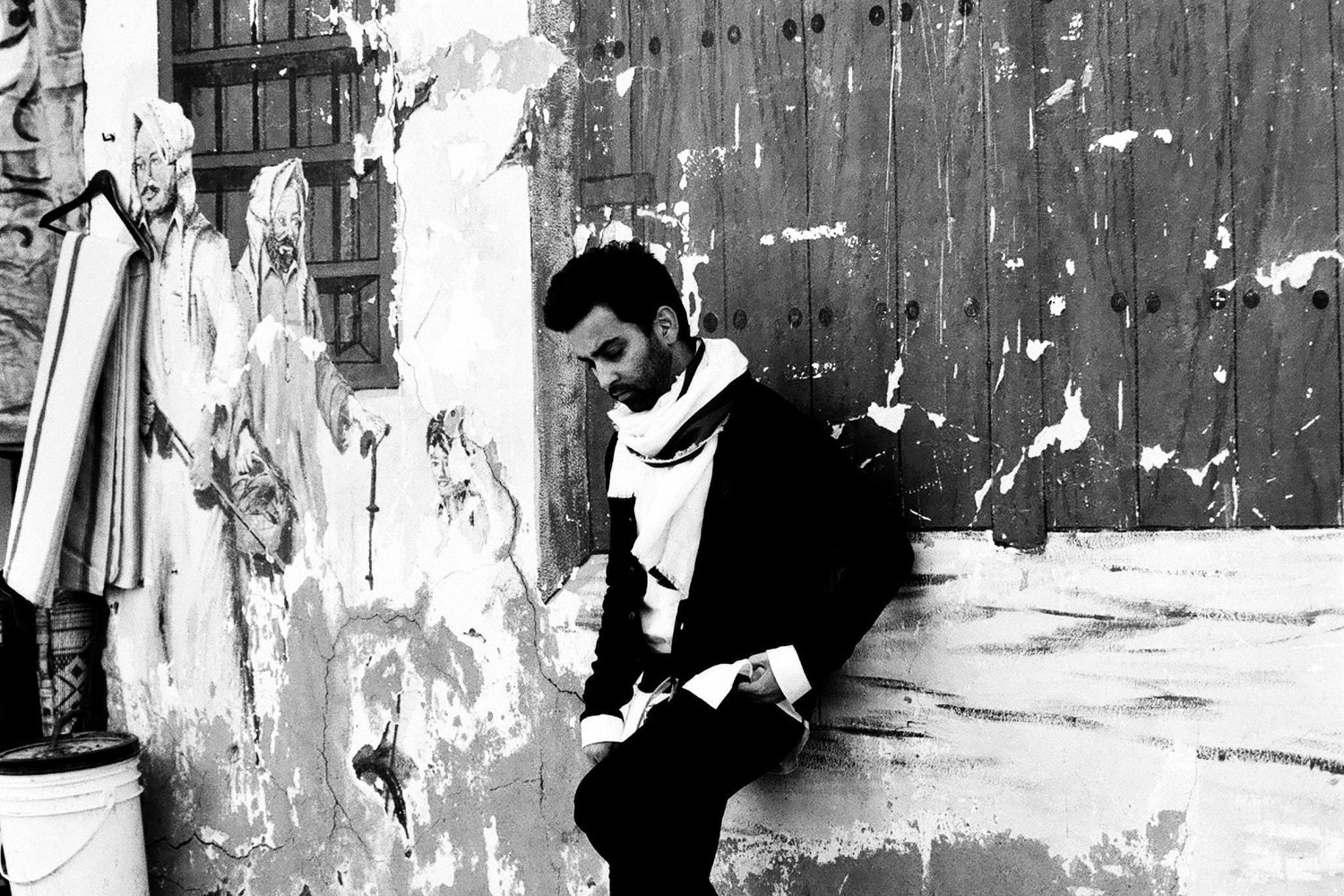 As part of the Red Bull Music Academy takeover in Dubai that aimed to program forward thinking line-ups and incorporate local talent, Zahed Sultan, one of the only local talents who made it internationally, was flown over to kick off the 4-day event at the well-known Music Hall.

Walking into Music Hall Dubai for the very first time in Dubai induced a very unexpected feeling. Knowing Music Hall as a lavish, modern concert hall concept, with table service and frequented by well-dressed men in suits and women in high-heels, I was surprised to walk into such a dark atmosphere with nothing really visible but the dimmed lights under the bar. Happy that people couldn’t see how scruffy I always seem, I instantly wondered if this was purposefully done to rid us of those notions of materialism, class and social stratum.

Shortly after I sit down at the bar, the massive red curtains open to reveal Zahed Sultan accompanied by the Sultan Al-Muftah Band (KW) sitting down behind him, dressed in traditional white robes and headscarves, and holding a variety of traditional Arabic percussion instruments. Behind them, a cellist (Aaron Kim), a pianist (Sanaz Sotoudeh), both wearing the traditional black orchestral uniform, and a casually dressed beat-maker (Muqata’a), wearing headphones, hiding behind an enormous modular synth rack. The word “Hiwar” in Arabic appears on a huge screen behind, manned by the visual artist Magic Island.

Zahed proceeds to introduce Pearl Diving Music with such grace, elegance, and nostalgia, which conveys profound humility and, more importantly, how passionate he is about his work. He then introduces and thanks all the artists on stage for helping him with this performance called “Hiwar”, which means conversation, or dialogue, in classical Arabic. Elaborating on the meaning behind the performance, he starts by explaining how youth culture today is only introduced to their heritage on occasion, through public holidays and classes at school, yet are never really encouraged to participate in a dialogue with the old and the new.

Note: I could not agree more with what he was trying to say. Progress is mostly about building on the old. As a musician, I feel that to be able to create something new, yet simultaneously staying true to your heritage is a very difficult yet important thing to do. I also find it very respectful and grateful from an artistic point of view, no matter what purists may have to say about “true art”. In my opinion, this elitism is what stops this beneficial culture clash from happening, because so many “old-school” artists condone the ideology of the new, and the “new-school” are often much too focused on the current trends to bother with these old yet culturally significant conventions.

He goes on to describe Pearl Diving Music further, giving the audience a glimpse into the dangers of pearl diving and its cultural significance. After a bit of quick research on the spot, I learned that pearl divers were not only subject to dangerous marine life such as jellyfish, sharks and barracudas, they also often suffered from various diseases like skin cancer, lung problems, deafness, blindness and even aneurysms. Yet, by the 19th century, pearl diving was estimated as 95% of the region’ income, making it the main focus of day-to-day life. Songs were made about a successful trip to the sea, unsuccessful trips, the feeling of coming out of the water, and even the loss of a fellow diver. “At its core, pearl diving was functional music”, says Zahed, reminding me of the same term used to describe techno as functional dance music, or ambient music used as “study music”. I started to grasp the beauty of the idea behind this piece, and the amount of creativity and intelligence it must take to bring all these complex social issues together in one uniform performance.

The cellist and pianist set things off with a dramatic entrance, accompanied by Muqata’a setting a bed of drones very far back in the mix to give everything an eerie sense of depth, a technique commonly used in cinematic film scoring. The lead singer starts chanting “Ya Rasoul Allah”, meaning messenger of God (Muhammad, the Muslim prophet). (I was not expecting religious chanting at all, especially knowing that using religious chanting in a non-religious context is considered quite controversial). Eventually, the whole band started singing along, drifting in and out of tune of the quartertone scale, while adding minimal hints of percussion on the start or end of a phrase. Slowly but surely, the voices start to come together in harmony, the percussion start to build, and it seems like the whole stage was entering a trance-like mind-state. Suddenly, a contortionist yet contemporary dancer (Mabrouk Gouciem), crawls onto stage interpreting the malleable fusion of music with his whole body, twisting and churning, like waves hitting a raft.

Musically feeding off each other until the climax gets too exciting to contain, the band’s hype man starts getting the crowd to clap, without even saying a word. The crowd is somehow so entranced that they are actually clapping along to a complex 9/8 polyrhythm, something I’ve never really seen before. At this point I was so entranced I knew I was not about to leave my seat anytime soon. Like the percussionists sitting in the meditative pose, I too felt transported into that trance-like state, which was similar to an experience I had with chanting mantras with Hindu monks. Yet this was more magical, emotional and intellectually compelling. And just as I felt like I was on the brink of spiritual ecstasy, the song actually reaches the long-awaited crescendo, when the beat-maker unexpectedly takes the spotlight. Using experimental drones, found sound and samples from old documentaries about the perils of pearl diving, he pitches voices up and down, runs them through digital effects and absorbs the audience further into Zahed’s fascinating mind trip.

This became the structure for the next songs, with the experimental electronic interludes, followed by the cinematic orchestral bed and the buildup and crescendo of song and percussion. Yet despite the song structures remaining the same, every song had a very different mood, tempo and time signature, each time keeping us interested, and surprising the audience that is used to basic 4/4 rhythms. Muqata’a would often add nice variations by introducing sub bass and filter sweeps to add tension that was impactful yet somehow removed from the whole piece. It sometimes felt as if he was not there, especially since the spotlight was never even shining on him. Nonetheless, the piece would have not been such a “Hiwar” without his subtle electronic elements bringing it all together.

For the last song, Zahed appeared again and called the audience to the dance floor for the last piece, a traditional celebrative song that would simply not work without the audience’s participation. The lights came on and we all awkwardly headed down, able to see each other clearly. Everyone seemed confused. Despite being in an Arab country, most of the crowd is clearly not Arab, but it felt like we were all feeling the same things. It’s as if Zahed pulled us out of our bodies and stripped us of our self, and threw us back in for a reality check. Everyone on the floor seemed unique, whether we were wearing cocktail dresses or Harem pants, we were all right there, consumed in the experience, trying to understand what was about to happen next. Then we just partied with the band, dancing like we were at a traditional Arabic wedding for the first time. It was the perfect ending to such a profound experience.

Throughout the performance I could not help but feel a huge wave of nostalgia, old forgotten emotions, like a forgotten people. Zahed was making us feel how sad it is that all this is a lost art, that we are losing our heritage. Zahed wants to make us feel guilty, to see our mistakes, and to collectively go back to our roots. Footage of skinny fishermen flooded the screen, working with their hands and earning their living with blood, sweat and tears. All the while digitally manipulated with finesse by Magic Island.

Zahed has put together a masterpiece blending traditional and modern music and audio, old videos manipulated with new technology, and traditional and contemporary interpretive dance. I’d like to thank Red Bull for pushing our local underground talent over the weekend, and would highly recommend everyone to experience Zahed’s music live, which he will be performing in the UK starting the 17th of April: