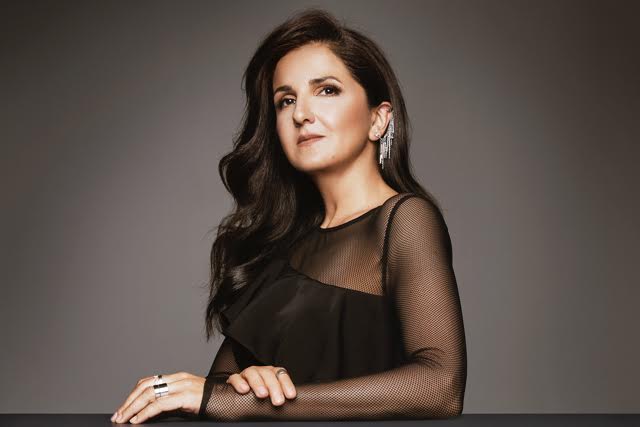 The new album “Intersection“ by Lebanese artist Tania Saleh – in collaboration with music producer Khalil Judran – is a multi-dimensional experiment that combines visual and auditory elements creating something that is more than just an album.

This project is a mosaic of different voices stringing together a conglomerate of issues plaguing the Arab world and still relevant today. Intersection is different from her previous albums, not only in musical terms but also in its production style and its focus on providing an audio visual experience. A 15-minute video directed by 28-year old Lebanese filmmaker Elie Fahed serves as a sort of a trailer accompanying the album. It was shot in Lebanon, Egypt, Morocco, Tunisia and Norway and tells the story of the songs in a visual narrative using street art conceptualized and executed by Saleh herself, as well as archive footage from different periods and locations.

The album was released by Oslo-based label, Kirkelig Kulturverksted (KKV) and was produced by Tunisian artist Khalil Judran, with Erik Hilestad and Tania Saleh serving as executive producers. They started working on the album almost two and a half years ago and it is the second release with KKV for Tania Saleh. From a musical perspective, “Intersection“ could be Saleh’s most innovative work yet. With her powerful voice, she creates a multi-layered soundscape that draws on different electronic beats and rhythmic patterns combining them with different acoustic instruments. The album presents an array of different thoughts that are reflected by the choice of poets Saleh has chosen for this project. Throughout the album, one can also see the prominence and vision of electronic composer and producer, Khalil Judran. His experimental electronic characteristic sound worked seamlessly together with Saleh’s own music.

Working with Judran on Intersection took place mostly online. According to Tania Saleh: “You have to catch up with the times and start working with new technologies. It was very time efficient to work this way. Things progressed the way we wished, even though we were all in different locations between Beirut, Cairo, Oslo and Montreal.” Saleh and Judran would remotely exchange all the melodies, add vocal recordings, electronic loops and sound effects and thus create a symbiosis of a complex structure of sounds. Tania and Erik Hillestad recorded the acoustic instruments in Cairo, Egypt. Throughout the album, you will also hear woodwind instruments, violin, double bass, the oud, as well as Arabic percussion which add intimate sounds to the electronic beats. “Judran finally mixed all the elements together with my voice. His role was crucial to the final touch of the album. Of course, I researched the poets, composed the tunes and chose the musicians but the sounds you hear are Khalil Judran’s music.” It is musically very rich yet it does have a different character to what we are used to from Saleh. She explains: “I usually create the lyrics and the music simultaneously but in the case of “Intersection“, I had to find the poems first and then compose the melodies.” With this album, Saleh wanted to explore new horizons and perspectives. She feels the need to reinvent her sound every time. Experimental electronic music was an addition to her previous work, which was more Folk/Rock/Jazz influenced.

Her two original songs, “Show me the Way”, and “Speechless” were written before she decided on the poets. These two songs reflect the mood and style on how she wanted to approach the other songs.

From Khartoom to Aleppo
From Rabat to the Arab gulf
What history is being written?
I am lost, can you show me the way?

Show me the Way

Even though you will find this tune more loyal to her previous album, the sentiment is very much in tune with the rest of Intersection.

You are dreaming of peace,
Still alive because your time has not come
Following the compass of your life
It is silent
And you are speechless

The lyrics above show how the album toggles between different thoughts and issues that concern the Middle East. It is the reason why she chose poets from different eras and places: to emphasize the fact that the issues addressed are interconnected.

She further elaborates: “I wrote my songs before choosing the poems. I tried to find ones that reflected what was in my heart. I had to portray my reality, as well as the reality of other Arab poets, using their own words”. From Mahmoud Darwish (1941-2008), Younes El Ebn (1926-2012), Ahmad Fouad Nejm (1929-2013), Joumana Haddad (1970-) and many others, she chose poets who in a way represented their society. “Most of the poets I chose were either exiled or jailed during their lifetime. I thought they deserve to be heard by the new generation. In many ways, the new Arab generation is slowly losing its identity and I thought it was time to bring back pride to that culture. Although most of the poems are reflecting the past, not much has changed in our modern times.We are now at a critical ‘intersection’ where we should choose the right path”.

“Intersection“ has many meanings for Saleh: “The word seemed perfectly fitting because the project is an intersection between my ability to write songs, to sing and to draw. It is as well a new intersection in my career, as I’m deciding which way to go and which style to choose. It is an intersection between the ideas of the poets, despite the fact that they were living in different places and periods. They had a similar way of thinking, a way which still resonates in all parts of the Arab world“.

“Intersection“ is a very powerful, hopeful and ambitious project realized in a time of continuous change. With the words of Ahmed Fouad Najm, Tania Saleh ends the album:

We will sing, always sing
And preach goodness in our words
We will roam the world
With our majestic melodies
Always clear about our choices
Not lost in between