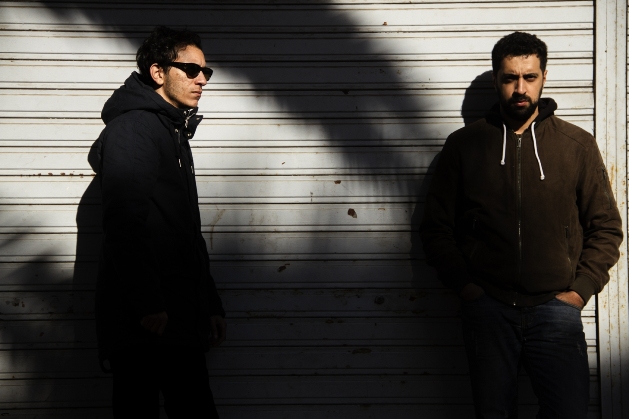 Raskas: An Essential Introduction to the Moroccan Indie Scene

Raskas is an independent post-rock/experimental electronica music group formed in Casablanca in 2013, and consisting now of only two members. According to the their bio: “the name [Raskas] comes from a rare kind of “fish” that stays alive around 72 hours after being taken out of the water. That’s how we feel and behave. And that’s how we conceive music”. This last statement was somehow honored during their latest live performance on the Tremplin Boulevard Festival in their hometown. By their last song, they had turned an audience consisting of a dozen people into a packed house.

Their performances are governed by music and only music. The band rarely interacts with the audience, unless it was really necessary. The audience doesn’t seem too care, as they are fully taken by the sounds produced by a duo accompanied by a guitar and set of quirky equipment. Their songs set a tone, rise in intensity, build a climax and then self-destruct. What really sets Raskas apart, is that almost everything about them is unconventional. Their biggest charm is the fact that you rarely get what you expect. This brings a sense of beautiful confusion among the fans and audience members.

The independent/alternative scene in Morocco is more or less 22 years old, giving Raskas and their performances even more importance. The scene itself is slowly yet surely growing, and innovative and experimental acts like this duo give a really important and powerful push to other acts who are looking to climb this musical ladder. The introduction of ‘foreign’ music to the Moroccan listener had been one of the major archetypes of this local scene since its beginnings, especially since it didn’t have promising beginnings: the arrest of the 14 metal musicians in 2003 for charges of Satanism is what brought this independent scene/subculture into view of the mainstream media and the general public. The same archetype manifests again in this faint glimmer of audacity that artists are beginning to show. In doing so, they introduce fans to new sounds, eclectic musical combinations and aesthetics that were not heard of in the local scene previously. In other words, Raskas is showing to the outside world what local Moroccan music could do.

If we look at the timeline of how the Rock scene in Morocco developed, we’ll see that at first, around the late 1990s, the underground scene, with the exception of Rap, was predominantly Metal-oriented (Nekros, Infected Brain, Reborn, these three bands are considered the first generation of Moroccan Metal bands). Later on, the local element began to dig its way into the independent scene, first with the development of the Fusion genre with bands like HobaHoba Spirit and Haoussa. Punk rock was perhaps first played by ZWM (ZleqW’lamout; Moroccan Arabic for Skate or die) formed in 2004. By 2011, a solid alternative Rock sound was established by Barathon Lane, and by then Lazywall had made their breakthrough in Morocco as well. After this period, the local dialect (darija) became not only a language of choice for social media and advertising, but also a trend within the underground rock scene. It was during this period that some bands began experimenting with different styles, fusing non-rock elements into rock structured music ending up with a hybrid sound. Raskas was one of these acts.

There is some distinction between two different generations in the local scene. The first one, (late 1990s to 2009/2011), experimented mostly with Rock influenced genres, notably Metal and Punk. Bands like Vicious Vision, Hinder Minds and Mean Street became the most visible acts during the period. The second generation wasn’t much into labels. Bands like Rock But, Soundtrip and Barathon Lane experimented around with the song structures and fused in some neglected genres.

To most people, or to the regular Moroccan rock enthusiast, Raskas is just another act. However, they might just be the perfect introduction to anyone interested in the Moroccan indie scene. The aesthetic that Raskas employ is by far the most unusual to the regular Moroccan rock enthusiast. In other words, if we want to look at how advanced this scene is, Raskas is where one should at.

As mentioned, the band now consists of two members only: Ayoub Lahnoud, guitarist, and Abdellah Rchidi, sound programmer. Both are composers as well. It was first formed in 2013 as a four-piece band called SSB: “There was a drummer and a bass player who had to quit for one different reasons” says Ayoub Lahnoud during an interview, “then we found ourselves, Abdellah and me, stuck with a bunch of instruments and a lot of ideas. We said to ourselves: so? Do we go on? To which Abdellah’s reply was: as if we have a choice. Raskas was born.”

They are now working on their debut album entitled ‘Corrupt’, currently in the mastering process, set to be released early 2018. On their more recent tunes, Raskas seem to have established a solid recognizable sound, employing different elements (guitars, sound manipulation, ambient noise and sampling). Three years ago, they were still using vocals in the main sections of the songs, relying on ambient sounds and instrumental rather than sound manipulation and sampling, coming off as an experimental/post-rock band with vocals, somehow like Gregor Samsa. “I don’t know how problematic it is, but we quickly lose satisfaction” said Ayoub when commenting about how their sound changed. “We conceive music with the mood we are in. The first work was made in a quite melancholic-wandering-mood. Maybe it is because we were still roaming and experimenting with the sounds we had under hand.”

The most developed act in the Moroccan underground scene experiments deeply with different themes. The genius of Raskas shows not in biblical metaphors but by developing themes that contrast with the background of those developed within the scene. They gave themselves freedom in developing a very dynamic sound. “All we have done can be translated into one sentence”, says Ayoub Lahnoud, “How fucked up are we now? How we build something, make it harmonious, find equilibrium and then destroy it. We structure our writing based on this idea.”

Their performance in the Boulevard Festival has a lot of significance as this is the place where it all began. The scene in Morocco started out as a community of musicians who all try to play in the same (and only) place. The Boulevard festival served as the mortar that kept the bricks together. In 2010, the EAC Boulevard Association set up a place called Boultek, providing rehearsal spots, studios and a stage for bands to perform on.

There are now a couple of other places like the Boultek in Casablanca and other metropolitan cities.Musicians now have more opportunities but the scene still suffers from a lot of basic struggles. Just like other bands in Morocco, Raskas struggles as well with documentation and their discography is not fully available for fans. So far, Raskas have ten songs available on their Soundcloud page and two videos on Youtube, one of which is a live performance. To deepen the wounds, venue owners have a tendency to avoid Rock bands. Most bands can only play gigs in places like Boultek and l’Uzine. However, Raskas are optimistic about the future: “There is a counter-culture wave rising slowly, and seems to be growing enough to become an important part of our culture” says Ayoub. “But for that to happen we must create our own opportunities as independent artists. We must shake the concrete and make it colorful”.