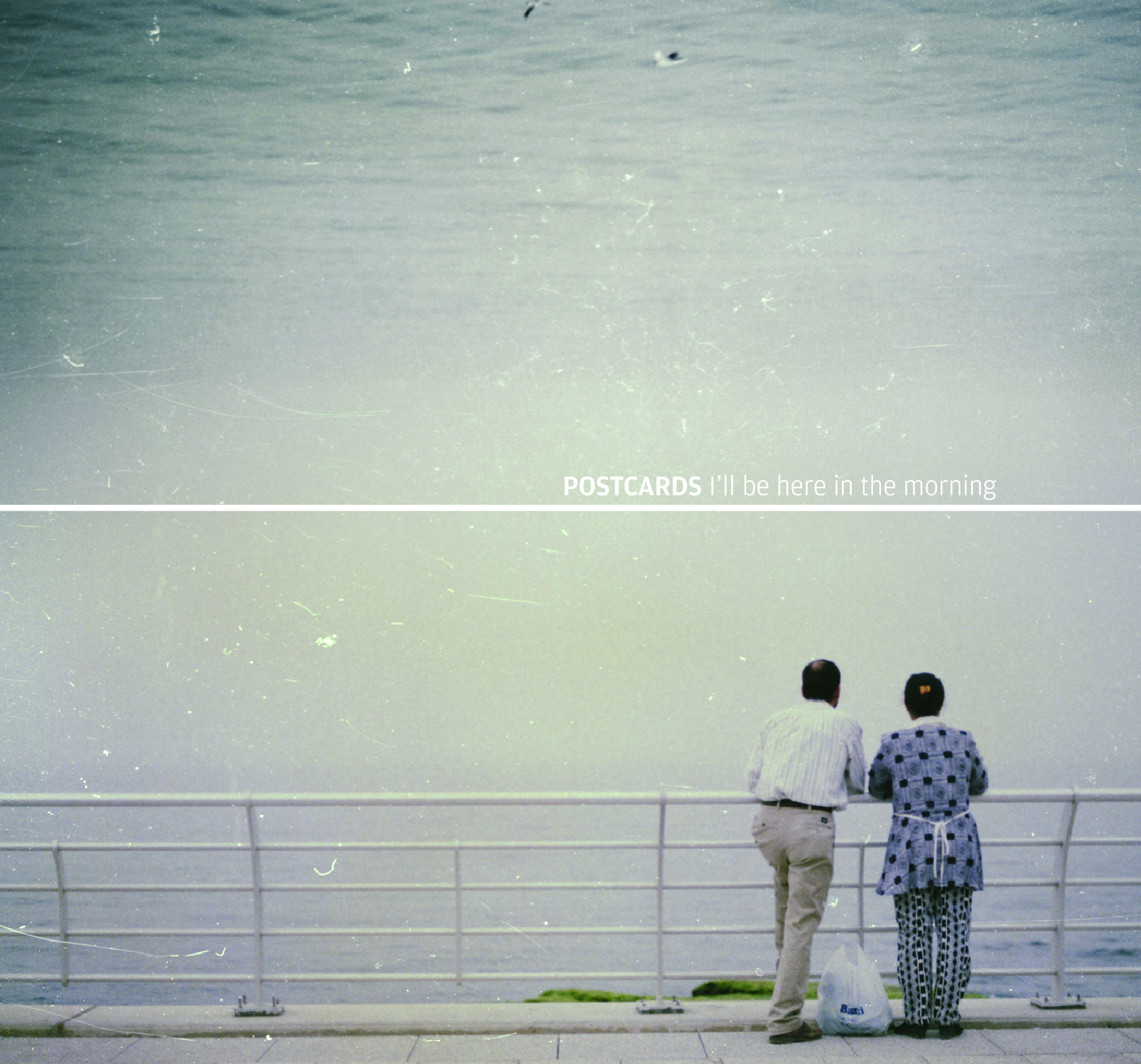 Album Review: Postcards – I’ll Be Here In The Morning

Following a series of well-received EPs, the Lebanese quartet’s first full-length album I’ll Be Here In The Morning represents a major leap forward for the young band, establishing it as one of the most exciting and rewarding projects to come out of the country’s burgeoning alternative music scene.

The man and woman on the cover of Postcards’ new album stand against a railing looking out at the open sea. It’s a wistful romantic scene but there’s something uneasy about this photograph by Rachel Tabet. It’s a grey sunless day and the two people have a resigned slouch as they helplessly watch the sea swallow the sky. This surreal apocalyptic quality and the feeling of impending doom on the cover encapsulate the music contained within it to a tee.

Nowhere is this more evident than in single “Bright Lights”. Departing from the acoustic sound of their first EPs, the band rides a post-punk groove as singer and main songwriter Julia Sabra sings: “As the night turns into day / Everything falls into place / Yet I dream of nothing new / Looking out it’s all the same / Cities hung on swinging cranes / I watch them float away”. Between the dissonant bursts of guitar, the track boasts the catchiest chorus on the record. As if bolstered by the sturdier instrumentation, Sabra’s delicate vocals have a newfound confidence that she maintains across the length of the album, as the band flirts with dream-pop, shoegaze and jangle pop. And while some of the tracks bear traces of their folk past, the wider palette finds the band stretching their songwriting and instrumental chops beyond the confines of the genre.

Bright synthesizers pop up in “Before We Sleep” and “Revolvers”, whereas “Wrinkles” finds the band exploring the ghostly trip-hop sound of bands like Portishead. In the latter Sabra sings about a dream where she envisions drifting into the big sleep with her lover at her side, many years from now. In fact, dreams seem to find their way into the songs throughout the record, and the sound follows suit, as the band spreads ethereal textures that buoy Sabra’s gorgeous vocal melodies. “Before We Sleep” kicks off with a riff by guitarist Marwan Tohme that’s as languorous as it is catchy, and luxuriates in synthesizers that weave in and out of tune as Sabra sings of “fevers triggering the strangest dreams”. The coda sees the band layering Beach Boys-like harmonies to create a wall of sound that gives way to a fuzzy guitar solo that recalls Galaxie 500. The balanced interplay between the noisier elements and the softer side of the band is exquisite in its alchemy.

“Waves”, which kicks off Side B, feels like the centrepiece of the album. Paralleling the theme of water in opening track “Open Waters”, the song has a submerged quality and Sabra seems to be singing from someplace far off and long ago. Backed with only her guitar, she solemnly sings of a “a darkness we can’t see” beyond the stillness of the ocean. There’s a palpable tension throughout the track, and when the band comes in between the verses, forceful and monolithic, it feels like floodgates being flung open. And the band has never sounded this good. Throughout the record, Pascal Semerdjian on drums and Rany Bechara on bass provide a flawless foundation to the songs. The restraint they demonstrate – Semerdjian’s measured touch, Bechara’s composed playing – is a breath of fresh air from your typical Beirut rock fare, and Tohme’s guitar work is as indelible as Sabra’s melodies. The result is a patient album of understated beauty – thoughtful and deliberate. In a time where music is consumed like fast-food, where artists resort to clickbait gimmicks and where image-over-music rules supreme, Postcards have taken the time to craft a rich and cohesive artistic statement and have quietly grown into their own in the process. Producer and “fifth member” Fadi Tabbal’s production is spotless, with a sound that’s both expansive and warm, with an attention to detail that rewards multiple listens. The music feels positively alive and the production gives Sabra a space to explore the dark lyrical themes suggested by the album cover.

There’s a sort of fatality that runs through the album, cyclical and unwavering, from the opening lines (“And once again…”) to titles like “A Broken Record”. The song hides behind a playful, bouncy melody which makes its lyrics all the more devastating: “Oh honey how could I have ever known / Every moment is another battle lost”. This recurrent sense of dread permeates the album. It’s a little too easy to draw clichéd parallels between that unease and the tumultuous history of the country the band calls home, and although the album smartly avoids playing into the kind of themes expected from a middle eastern band, the one song that overtly addresses them does so with a rare elegance. Highlight “Flying Saucers”, a jangle-y mid-tempo ballad, recounts the aftermath of a bomb going off with a realism that’s almost painful: “I tried to call as soon as I found out but all the lines were jammed / And so I thought it best to go back making my dinner plans”. The song perfectly portrays our powerlessness in the face of such events (“We are good people / We could really care / With time this feeling’s turned into a deep despair”) and our tendency to turn our thoughts away from things we can’t help, as empathetic pain dissolves into a “simple itch instead”.

Mostly, however, the songs turn their gaze inwards. In penultimate track “Revolvers”, the band evokes Yo La Tengo in a jangle pop shuffle as Sabra summons destruction (“Hoping for the worst to happen / For clouds to burst / The sun to blacken”). This time though, there’s a truce of sorts as she wishes to “lay down all [her] weapons” and “leave it all behind”. The explosive guitar solo, in its euphoric energy, feels like a positive destruction. And so despite the grim weather on the cover, the sun seems to creep through the record at just the right moments. The two tracks that bookend the album feel of a pair with their stripped down instrumentation and confession of powerlessness, but final track “Wide Awake” starts with a reaffirmation (“One more from the top”). It’s trying again. It’s the reassertion in the album’s title. Even through the resignation, there’s a liberation in knowing you “don’t know anything at all” and admitting you don’t have control over “things slip[ping] through the world unsupervised”. In the last lines, Sabra wishes she could “disappear into this song” as blipping synths rise to the foreground and the song fizzles out. We’ll eagerly wait for the band to resurface.

‘I’ll be here in the morning’ was released via Ruptured (LB) on September 13, 2017.
Only physical copies available in Lebanon in Dawawine, BAC, Onomatopoeia, Music Now. Soon on Anghami.
Worldwide + online release on January 26th 2018 via Cargo Records (UK) and T3 Records (GAS).
www.postcardsmusic.com