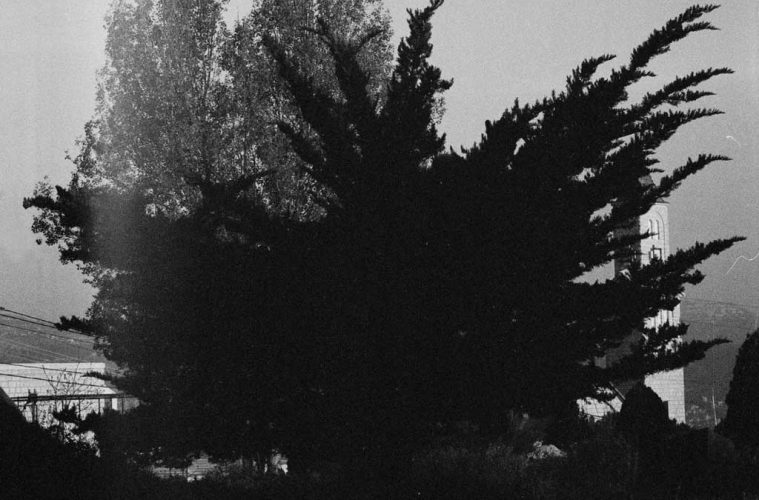 Kinematik is a band that was born in what used to be a shop in Rayfoun, Lebanon, bringing together five members in the name of Post-Rock. If you’re still an alien to the band and would like to get to know them before diving into this review of their second album, you can take a quick look at our interview with them. To sum it up for you, Kinematik is a band whose music can transport you in time and space as you find yourself in a little bubble, afloat, waiting for the next track to guide you through the journey. The band is currently made up of Anthony Sahyoun (aka Mme Chandelier) on electric guitar & electronics, Rudy Ghafari on synths & electronics, Roy Khazen on electric bass, Akram Hajj on drums and Teddy Tawil (aka TEDTEDTED) on drums as well.

Their second album is called Murur Al Kiram مرور الكرام (an expression that roughly translated to ‘unnoticed’) and is made up of 11 tracks, with subtle and very well-blended transitions. It is known that the band members are not afraid to push boundaries and go beyond the literal sense of the word ‘experimentation’ and this album reflects that beautifully, giving them an avant-gardist position in the Lebanese scene. Although Kinematik was never a typical Post-Rock band, Murur Al Kiram accentuates the band’s electronic music attributes with soundscapes that lift you up to space the German way, thanks to a more pronounced Krautrock influence. However, elements characteristic of Post-Rock are still present, especially in بين مريتين (translates to: between two mirrors) which strongly reminded me of This Will Destroy You and Mogwai. To dig right into the album, the first thing I noticed is how the ups and downs of each track, from beginning to end, shape the album into an actual voyage to cosmic darkness, rich with diverse melodies. This is no surprise given the current situation in Lebanon and the effect it has on everyone living here. The subtle hints of thoughts and emotions translated through their music create an intimate yet obscure relationship between the members and the listener.

If you’re a Kinematik fan, you’ll probably notice that the big sound peaks that played through our ears in the first album are no longer present, but are rather replaced with more intense build-ups and interstellar sounds. The songs are generally more upbeat, with a heavy reliance on drums and percussion. The overall layering of the diverse range of sonic elements is truly impressive. I do recommend that you listen to the album with headphones on and try to filter through the layers one by one and appreciating some of the otherwise unnoticeable gems.

The drone effects, along with the minimalistic sounds and the space ambient soundscapes mix together so seamlessly, creating a hypnotic atmosphere that is so hard to break away from before the end of the 11-track album.

Listening to Murur Al Kiram over and over again, I felt like the songs have a certain rawness to them that is reminiscent of the band’s live shows. If you’re familiar with Anthony Sahyoun’s solo project Mme Chandelier, you might be able to pick up on the similarities between his work (especially “Exodus” and “Triangle”) and the different sounds of this album.

I am personally very intrigued by titles so I tried to study the relationship between the odd and considerably longer track titles (compared to their 1st album) and here are two of my favorite observations:

A consistent drumbeat kicks in at 1:08. I found it very similar to the sound of a beating heart. I actually measured its tempo and compared it to my heartbeat and there was a match so I’d like to believe that there is at least some truth to my theory and that I wasn’t just feeling anxious.

The song is a sonic manifestation of something stretching beyond limits. It was very satisfying for me to try to imagine a flat, borderless box going on and on, far into the distance, to the slow rhythm of the song. I expected the album to end on a heavy note, especially since the 9th track is so upbeat that it makes you anticipate a hard-hitting ending but track 10, محبي الكناري (translates to: canary lovers), paves the way for a smooth and silky finish. Roza روزا is a great ending for the sonic journey. At 2:23 the mood is set and you’re prepared for something grandiose to happen. The aliens call one last time. Discreet exit.

The one thing I’d change about Murur Al Kiram مرور الكرام (an expression that roughly translated to ‘unnoticed’) is the name of the album itself because it’s something we will definitely listen to time and time again and it will certainly not be unnoticed.

The album will be out on February 28. Get a taste of what’s to come right here: