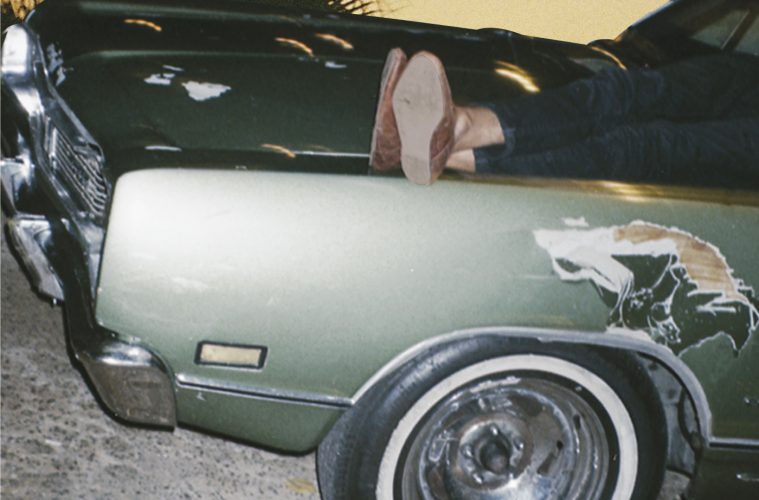 “I remember there was a lot of blood. The blood of a man found dead on the seashore […]. There was also blood the first time I made love”. These lines are spoken by a character in Nadim Tabet and Karine Wehbe’s ‘Summer 91’, the short film that brought the Bunny Tylers together back in 2014. Behind the Garbage Pail Kids-like name are singer-songwriter/guitarist Charbel Haber and multi-instrumentalist/producer Fadi Tabbal, two major players in the Lebanese music scene. Haber is mostly known as a member of post-punk band Scrambled Eggs, as well as for his many collaborations with renowned artists from the world of film, video art, visual art and theatre. Tabbal has made a name for himself as a producer at his studio Tunefork, which plays a central role within the Beirut alternative music scene, and as a chameleonic musician equally at ease in groups as varied as psych rock outfit The Incompetents, electronic duo Stress/Distress, pop group Safar and the aforementioned Scrambled Eggs. Their newest record “Chance Meetings”, a deep dive into the pair’s post-punk, ambient and drone roots, ranks as perhaps the most accomplished release in either musician’s prolific careers. And the film, set in a Lebanese coastal resort right after the end of the 15 year long civil war that brought the country to its knees, is an apt springboard for the group’s music: an intoxicating mixture of murder mysteries, nihilistic hedonism, post-war restlessness, middle-class ennui and misplaced nostalgia, set to cavernous beats, cinematic soundscapes and ice-foggy textures distilled from the darker strands of 80s music.

The records starts off unhurriedly, low rumbling and ambient noise ushering in scintillating drones and pulsating guitars. In the background, whirring percussion, like something taking off. The drones pile up and make their way across the stereo field. Tom drums come in from somewhere on the left, like a hammer to your head, and lead into the first proper song. “One Of These Days” is an immediate highlight and sets the tone for the rest of the record. Amidst the pounding drums and the guitar downstrums, we hear Haber singing for the first time: “It’s one of these days when I can say I’m sorry”. It’s a deep and drawling voice, weary and sorrowful, dripping with disdain but with just enough pathos to tug at your heartstrings. The sentiment is equal parts concern and contempt and the music is both elegiac and ominous – heavenly drones on one side, stuttering synths on the other and the relentless drums pummelling away. Suddenly, bursts of noise shoot through and envelop the song. Haber’s voice echoes around the wall of sound and an e-bowed guitar solo pierces through the noise to bring the track to a close. It’s a stunning introduction and when the band opened their set at Wickerpark Festival last summer with the song, I could see the people around me looking both dazed and puzzled at the blistering cacophony on stage.

Tabbal and Haber grew up in the 80s during Lebanon’s civil war. That decade has seen a revival in the past few years, surfacing in the stoned chillwave of psych rockers, the ironic-dance-pop of indie rockers and the Bruce Springsteen pastiche of Bruce Springsteen wannabes. But as Haber puts it in an interview, their affectionate-ironic corruption of 80s husky-voiced singer Bonnie Tyler’s name carries a mixture of naïveté and cynicism. Memories of ice cream turned rancid from frequent electricity cuts. Innocent times marred by the very real threats of death and destruction. And so the sounds the duo mine from the era are of a different kind. Borrowing from krautrock, goth, industrial, synth-pop and post-punk, the album is more darkwave than new wave. More Closer than Born To Run. More Disintegration than Aja. More Black Celebration than Super Trouper. There’s excess, not abundance, sex and death are interchangeable and the only dancing there is is the danse macabre at the end of the Seventh Seal. Drones loom, synthesisers screech, guitars shimmer, drum machines sputter and atop it all Haber intones his laments.

As a writer, Haber is a romantic, and his melodramatic lyrics could pass for teenage diary entries if they weren’t written with such eloquence and depth. He cites Thomas Pynchon and Film Noir for the smoky narrative mazes, and there’s something of Burroughs in the rotten brew, but his endearing occasional lapses in pronunciation betray his debt to the French poetry of Poetes Maudits such as Charles Baudelaire. The world he paints is one of depravity and decadence, of falls from grace and overflowing ashtrays – acidic, decrepit and beyond redemption, where the only reprieve is the blissed out high of a junkie. Fags are lit with candles, rats hide in sewers and sex smells like deceit. “Now we head to the sun / now we burn like scum” goes a line in ‘I’ll Make It Up To You’, the song that most overtly evokes the post-punk of Scrambled Eggs, updated with galloping drum machines, shrieking guitars, wailing vocals and razor-sharp bass synthesiser. “Nothing to miss but blood cum and piss” goes another in ‘A Sunrise Is Another Sunset’, one of the more tender tracks, with Haber softly imparting some bitter cynical wisdom (“No need to fake it / Nobody makes it”) as Tabbal sculpts a sonic array of thick fuzzy synths, programmed drums and stabs of static. ’Imaginary Song’ and ‘Fish Die In Millions’ offer some welcomed breathing space with their sparse arrangements and showcase Haber at his most songwriterly, with reflective poetic lyrics painting the image of a man spent (“I’ve given to the sand I’ve given to the sea”; “away from heart and sight into heaven’s delight”). Tabbal’s arrangement is unobtrusive on the former, placing Haber’s acoustic guitar in the forefront, and restrained in the latter, with small flourishes giving the track an ethereal quality befitting its death-as-release lyrics. The quieter tracks bring to mind the ambient and post-rock sound of the pair’s solo records as well as their work scoring films, and sit comfortably next to the more raucous songs.

“Junkie Hideout in Suburbia”, the lone instrumental, also recalls Haber and Tabbal’s work with Omarchestra, the tribute to Egyptian guitar virtuoso Omar Khorshid. In fact, echoes of Arabic music permeate the record, but far from clumsily stitching Western and Oriental threads in tasteless “fusion”, The Bunnies’ origins are betrayed by subtle note choices and flourishes. Sometimes, they are woven into the very fabric of the song, such as on the stunning Été 91 (french for Summer 91), which sounds like a mawwal run through a French Touch grinder. Originating with the titular film, it’s the most danceable song on the album, swaying and pulsating with an irresistible languor that recalls late-Spacemen 3’s drug-fuelled electronic jams, simultaneously anthemic and desultory. The song’s lone lyric (“We dream in the sun / We tan when we can”), double-tracked and repeated like a mantra, does more in its 10 words to portray the mixture of nonchalance, indolence and restlessness of the post-war generation than most thinkpieces about the subject. It’s the feeling of basking in the sun as the world around you crumbles and reaching for more sunscreen when it’s done falling apart. The heat is sweltering, the sun is the oppressive sun of Camus’ The Stranger and palm trees stand glum and defeated against bullet-shot slabs of concrete. At one point in the film, a character says: “you almost felt nostalgic not having to wake up in a panic under the bombs”. It’s a testament to the post-war void, the sense of futility, the merciless boredom and the perplexing way our mind and memory react to it all.

Final track ‘It Seems It All Disappears’ represents a clear break from the unrelenting bleakness of the album. Guitarists at heart, Haber and Tabbal retreat to firm ground for what’s at once the simplest, most naked and most emotive song on the album. “Nightmares hang on dreams / Keep me up till the dawn / We were never teens”.  Over two alternating chords, Haber belts out the words, bemoaning a childhood and innocence irretrievably lost. When he changes the final words to “we’re forever teens”, there’s sorrow as well as defiance in his voice, and the e-bowed coda, carried along by a playful shimmering riff played by Tabbal, feels like a minor victory – however fleeting. With the film’s setting as a launching pad for the album, Haber’s songwriting has gained focus and a wider scope simultaneously, and Tabbal proves once again his skill at working with singer-songwriters and taking their vision to new heights (see the fantastic Incompetents album Of Minor Differences… and Narcissism). ‘Hello Your Grace’ – another oriental-tinged song – threatens to tire with its circular structure but is buoyed by the sheer force and inventiveness of the sonic world around it. The duo recorded part of the album in Paris with producer Benoît de Villeneuve, and his studio and production lend the album a weight and sheen rarely seen in Lebanese underground releases. The songs’ vast stereo soundscapes and intriguing stories beg for repeated viewings. The sonic richness makes me reach for my headphones every time. Somewhere on the album, Haber sings “No one to hold / Yet the story’s worth gold”, (un)wittingly revealing the sublimation at the heart of the record. Stories worth gold indeed.