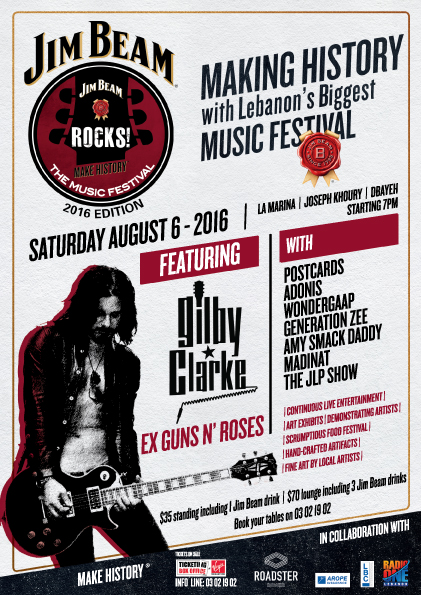 On Saturday August 6th, Jim Beam brings together 7 of the best local artists supporting a headliner that’s been rocking the world since 1991 with his world-class guitar skills and high caliber musicianship. It’s not the first time Jim Beam rocks Beirut, last year Glenn Hughes was the captain of their rock’n’roll ship.

Let’s catchup with the Jim Beam Rocks! Line up for this year that is promising to deliver one hell of a night and make Lebanese rock music history yet one more time.

Gilby Clarke:
Gilbert “Gilby” Clarke is an American musician, singer, songwriter and record producer best known for a 3-year tenure as the rhythm guitarist of Guns N’ Roses, replacing Izzy Stradlin in 1991 during the Use Your Illusion Tour. Following his departure from the group, Clarke went on to forge a solo career as well playing guitar with Slash’s Snakepit, Kat Men, Heart, Nancy Sinatra, Kathy Valentine (of the Go-Go’s), MC5 and forming his own group Rock Star Supernova with members of Metallica and Mötley Crüe. Gilby is known for his eclectic live performances, maintaining the classic rock vibes of the early 90 while delivering a world-class performance that stays up there with the greats.

Adonis is a Lebanese favorite five-piece pop/rock band, famed for its festive melodies and engaging Arabic lyrics. Weaved around storytelling, catchy tunes, and playful arrangements, the band’s music is becoming a voice for today’s ambitious and freethinking Arab youth.

Postcards is an indie folk band based in Beirut, Lebanon, formed in the summer of 2012 by four friends with a common passion for music. Postcards started off by playing the pub circuit across Beirut. Performing a varied repertoire of both English and American folk-rock music, they gradually but surely built a loyal fan base, while writing in parallel the songs that would become their first EP, Lakehouse, released in the fall of 2013. Using its musical influences as a springboard, the band manages to create a lush and dreamy sound-world, equally informed by traditional and contemporary folk genres, and delivers in the process 5 gentle ditties of atmospheric beauty, posed somewhere between Fleet Foxes and Edward Sharpe & The Magnetic Zeroes.

In the year following the release of their first EP, they played shows all across Lebanon, toured Jordan, the UK, France and Portugal, opened for numerous bands including Beirut, The Royal Concept and Wanton Bishops, and performed at festivals in Beirut and abroad (Wilderness Festival, Byblos International Festival, Wickerpark Festival).

Early 2015, Postcards released a new EP ‘What Lies So Still’ was finally completed and released in early summer 2015 to excellent reviews. In July later that year, the band opened for international folk duo Angus & Julia Stone at BIEL in Beirut. world is indeed their oyster, and they are set to make an impact far beyond the confines of their country.

Madinat is a new addition to the growing rock scene in Beirut, Lebanon. A band of four young men – telling tales through sound and music. They’ve found a home somewhere lost in the chaos of Beirut and they wouldn’t have it any other way. In their early days, vocalist and guitarist Joseph Abboud and bassist Anthony got their kicks by jamming in basements – to hanging at bars in Byblos. Fast-forward a couple of cabs – some embarrassing bar tabs – and the quintessential late night kebab – enter drummer Philipe Dib & keyboardist Ayman Zebdawi. They are the latest additions making Madinat what it is today. The band are on the brink of releasing their new album – produced by local heavy hitter and ex-frontman of Lazzy Lung, engineered and recorded at Guerrilla Music Productions.

Chill out vibes, indie music and a goat. If you can dig this weird mix then you’ll love WonderGaap. WonderGaap is an Indie band based in Beirut, Lebanon. It is composed of four friends who started jamming back in 2013. Rayan Sayegh is the leading vocalist and keyboard player; he is accompanied by lead guitarist Michel Maouad, Bassist Ribal Moujaes and drummer Kevin Abboud. Their single “To the Meadow” has recently been released amid positive reviews. As they’re getting ready to release an EP, we decided to sit down with this young band to learn who WonderGaap really are.

The JLP Show is a pop band, a rock band, and an ‘everything-in-between’ band; in their 8 years of playing together, they’ve steadily gained popularity and are now hailed as one of the most sought-after bands in the region.
The JLP Show’s success stems from their ability to perform in both the tiniest local pubs to the largest venues and still manage to deliver a full-impact performance without sacrifice. Between their unmatched stage presence, their ability to break-in the toughest crowds, their musicianship, and a witty sense of humor, The JLP Show is your all-you-can-eat entertainment buffet.

Amy Smack Daddy have been entertaining Lebanon with their feisty cover tunes. This 5 piece band will make sure there is never a dull moment during their performance and with a huge selection of songs varying from rock, alternative and funk you will definitely catch yourself singing along!

They play cover songs, adding their little touch of character yet maintaining the integrity of the originals, undoubtedly keeping you interested and wanting more. With their extensive repertoire, Amy Smack Daddy strive to meet the taste of a wide range of audience making them the perfect band of choice. Be it a pub, private event, or wedding, they are known to deliver an outstanding performance.

The band got together thanks to a series of random events, leading them to meet, play together and realize their potential. But stranger than how this band met, is the story from which the name “Amy Smack Daddy” comes from:

Carlos (Drums) who used to live in Birmingham (UK) pursuing his education, was renting a room with his older brother in a house shared with the landlord and his family, including the adorable Amy. She was the only grandchild who was two years old and had beautiful golden hair. Her mother used to call her many times for lunch and snacks while Carlos listened in astonishment from his room above: “Amy, come and eat your pudding!” and “Amy, it’s din-din time!” were among the things shouted (with a heavy Birmingham accent). After one glorious Sunday roast, everyone was in the living room. Amy’s mother, in an attempt to tease her husband called out: “Amy, Smack Daddy!” (with that same accent) and the overall sounds she made got imprinted in Carlos’ 17-year-old brain. Little did he know that these same words would come to be the name of the band he would share with four other guys who took a liking to the story of Amy and her golden hair.

Generation Zee is Ziad ‘Zee’ Saliba’s alt-rock project co-founded with childhood best friend and bassist Mark Safiti. Named for the last generation before a spiritual revolution and playing original songs that celebrate all aspects of the human condition both lyrically and musically, the band has moved from being a solo act on the Sunset Strip of Los Angeles to quickly becoming a prominent rising presence in Lebanon’s local scene. Their first EP ‘Child’ is out soon along with the Arabic/English single “Ya Rabi3i”, which is currently enjoying radio-play at Radio One as part of the JIM BEAM Rocks 2016 Festival.