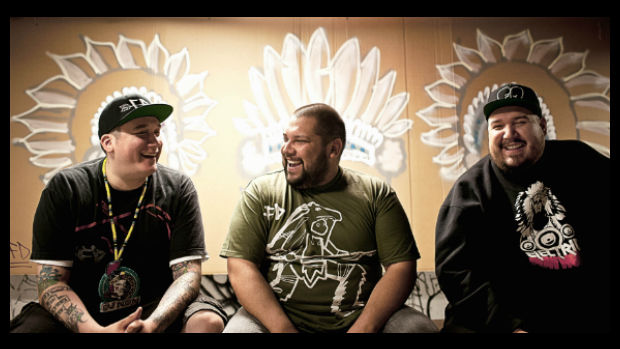 A Tribe Called Red is an all-First-Nation-DJ-crew from Ottawa Canada. Ian Campeau (Nipissing Anishinaabe), Tim ‘2oolman’ Hill (Mohawk) and Ehren Bear Witness Thomas (Cayuga) have come together to create a unique style of music based on traditional native sounds from Inuit throat singing, native chants, and Powwow. They take traditional indigenous sounds and accessorize them with electronic, house and hip hop music; not the other way around. Through their revolutionary music, A Tribe Called Red aims to enlighten its audience about the problems First Nations are facing and introduce us to hundreds of years of native culture with a joyful and powerful electric pow wow. If you ever have to chance to attend one of their concerts, please don’t wear a headdress or any “redface” Indian costume.  It is absolutely no surprise that they’ve so quickly become heroes to colonized people all over the world.

Here are my personal Top 10 songs, as usual, in no particular order:

We Are The Halluci Nation — A Tribe Called Red, John Trudell, Northern Voice

Look At This (Remix) — A Tribe Called Red