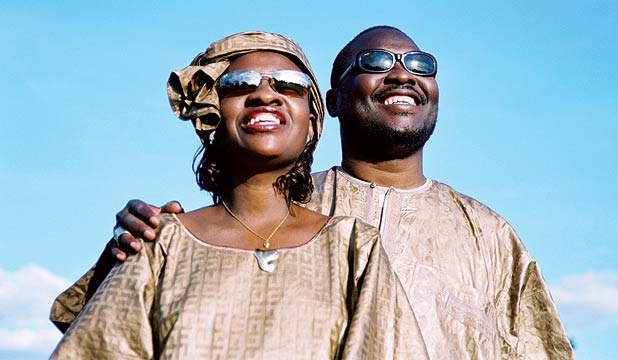 Amadou Bagayoko and Mariam Doubia were both born in Bamako, Mali and happen to both be visually impaired — you guessed right, the sunglasses aren’t a fashion statement.
Mariam and Amadou weren’t born blind. Mariam lost her sight at 5 years old and Amadou at 16. Ever since she was very little, Mariam would spend her time with an ear stuck on her father’s old radio to learn all her favorite songs by heart. Amadou, on the other hand, spent his teenage years listening to Jimmy Hendrix, Led Zeppelin, John Lee Hooker and Eric Clapton and mastering his favourite instrument, the guitar.
The couple met in 1975 at the institute for the blind at Bamako. They released their first album “Sou ni Tilé” in France in 1997. In 2003, they released a new album with Manu Chao with successful titles like “Senegal Fast Food” and “M’bifé”. They went on to sing with Shakira in June 2010 during the world cup and in December 2010 at Oslo to honour president Obama during the Nobel Price ceremony.
Their latest album, “Folila”, features many artists that the couple have met during their career; a blend of themes, genres and cultures that seem to only fit artists like Amadou and Mariam.

By Dima Alameddine (List is in no particular order)