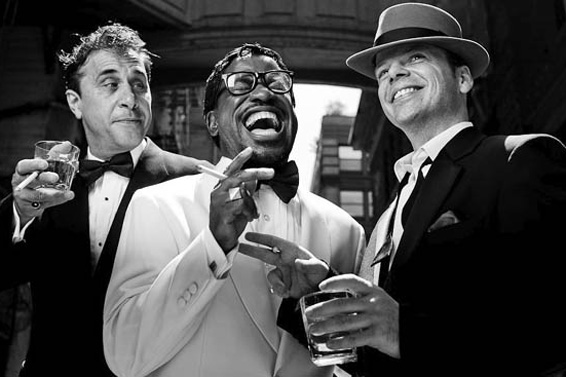 Shawarma Jazz: The Mystery Behind the Delicious Gaillard Song

It takes a song to have one word in Arabic – or even a word that sounds like it’s in Arabic – for Arab people to stop what they’re doing, put on their philosophical glasses, jot down lines and lines of theories on a big white screen and start running statistics to prove that the artist has Arab roots. What’s worse than that is that they do not stop there; they keep digging to find information that links the artist to their nationality; be it Lebanese, Syrian, Egyptian… Today’s victim is… *dramatic music* Slim Gaillard, with the evidence being his song “Yep Roc Heresay”, or should we say: hearsay! *gasp*. To make you even more excited, you’ll be happy to know that Gaillard’s talent did not only catch the attention of drooly hungry people, but also that of Jack Kerouac who wrote about him in On the Road. “Yep Roc Heresay” was even used in the 2012 movie soundtrack. Whether or not you’re hungry is not important because you’ll be grabbing your phone to order food halfway through the song. Remember to use your imagination, listen to your tastebuds and savor each dish as Gaillard sings it to you in his own unique way. Gaillard is seen here in this picture with his hands in the air, surrendering and admitting he’s guilty. We’re going to ignore the fact that he has bongos between his legs and that this is most probably a candid picture of him caught in the middle of his performance because we only believe what’s in the favor of proving our theory.

The Song in Question

We read through endless and terribly detailed discussions online to bring you an attempt to understand his lyrics and a list of claims made about Gaillard and his song. But, before going any further, here’s the infamous song:

Gaillard is probably rolling in his grave, regretting the shit out of writing this song but let’s not think about that. Now that you heard it for yourself and played puzzles in your head trying to figure out what he’s saying, below are the lyrics (the ones we picked up on at least) to this wonder of a song, alongside suggested interpretations:

Some theories/comments/claims we found online:

– Maybe Slim is actually Sleiman. How has he not been added to every list online listing famous *lebanese* musicians?

– He’s reading off an Arab OR Armenian restaurant

– He’s mimicking the sound of someone attracting customers to by shouting out the name of the meals served at his/her restaurant.

– There is a record company based in North Carolina called Yep-Roc Records, whose owners named it after the Slim Gaillard tune.

– Why hasn’t Eminem done an updated rap version of this song?

– Gaillard was out of money by the time he made it to Detroit and was turned down a job at Ford. An Armenian woman named Rose Malhalab took him in, where he lived in the basement of her and her husband’s beauty shop on Woodward Avenue. She cooked much Arabic food for him, explaining his entire song.

Did you pick up on more words/expressions?