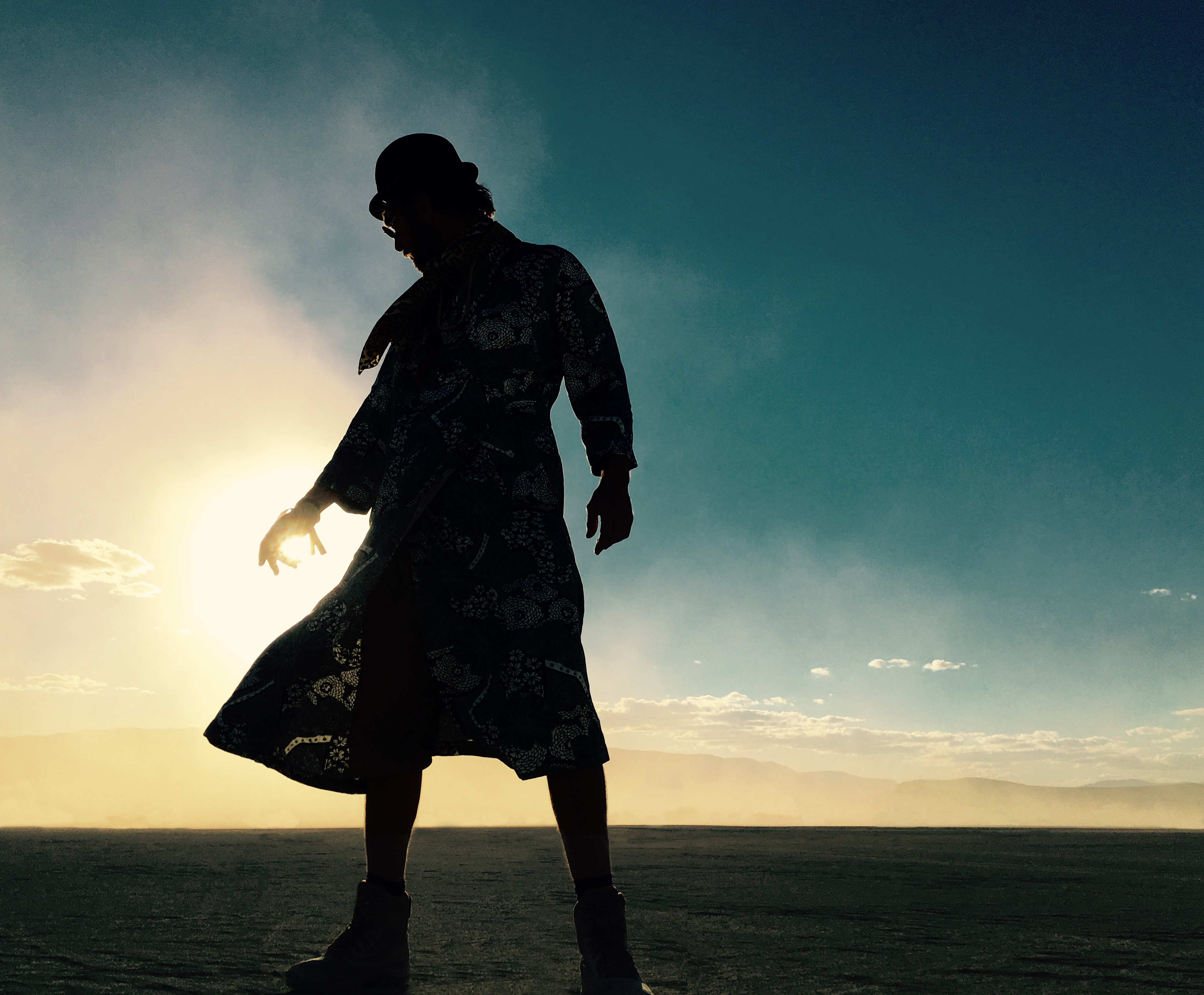 Be Svendsen: The Master Storyteller

Be Svendsen produces an organic and nomadic style of techno. After starting his solo project in 2011 releasing a series of EPs and remixes, the ripples spread via live performances and a breakthrough into the international scene came in 2014. While exploring a myriad of styles and musical traditions, Be’s live show-downs has developed into a melting pot of hypnotic desert-circus-shaman-cowboy-techno, incorporating elements of vocals, teased field-recordings, nostalgic samples and live instruments, mixed up with the meditative qualities of repetition. His performance takes the audience on a deep experimental journey, providing a
cinematic soundscape allowing the receivers to celebrate life, the universe and everything. We were lucky enough to have an interview with him, here’s what happened.

1. Be Svendsen, your name is becoming one of the biggest in the electronic music realm. How did you find your way into this particular scene and what was the road to creating your unique sound?

I have only just over the last year or so, realized that there is a scene, and that I’m a part of it. I have always made music with the desert and open planes in mind and since the beginning of my musical journey, it’s been the outdoor events that’s been calling. There is a growing global community evolving around the desert burns, which is almost creating a scene on its own. Playing at those has definitely made a difference for me.

The road to my sound – very little thought process involved, always obeying an inner compass towards what works and pushes my own emotions. Sometimes I go in with an idea, or a sample I’ve come across, and start from there. It’s really just a matter of inspiration, taste, choices and technique. When you find yourself alone in the studio suddenly standing up, laughing loud in amusement, or with goose bumps as a direct result of a prolonged series of choices you’ve made, then I feel confident that it will touch like-hearted folks. For me it’s often an organic expression, rooted in samples, real instruments and recordings. But a synth can most definitely add soul too.

2. You were born in Denmark. Did the music scene there influence or help build your signature sound?

Great music has come out of Denmark, and we have some super talented producers and musicians here, but my inspiration doesn’t really come from Danish music.

3. Your live performances are cinematically dense journeys through prairies, jungles and deserts with a lot to tell. What are the stories hidden within your beats?

– The receiver is the lead character, the story is your experience – it’s your life, attract what you may. I only supplying the audio backdrop, offering a soundtrack to your journey if you chose it to be. Through familiar territories and into the unknown. Joy and sadness. love and fear – We are complex beings, but not that different from one another.

4. Every live set you perform is a different type of journey and goes to different places than your previous one. How do you keep things so fresh and evolving at this speed?

Every live set I play is not an entirely new journey, that’s close to impossible, but I do my best to come up with enough new material to put a new set up for listening every year after the summer season, with maximum one or two tracks from the previous year. Whatever the inspiration and output has been during the year will become the musical journey you hear. It is almost like releasing an album a year, and it is a constant challenge to find time while constantly touring, to give it the focus it takes to create a solid coherent body of music like that.

5. Your music sounds very organic, yet it is very synth-driven. How do you achieve that balance? Is it the analog synths, the sound design, the composition or the magic in between?

Good questions you ask Nicole – and you almost gave the full answer there yourself! I use a lot of real recordings, and I love sounds samples and melodies that triggers a feeling in me of something familiar, old, lost and beautiful. Nostalgia is an interesting feeling. I have a few secret weapons which I always use on almost every track for the last 10 years. I don’t own a big synth park – only analogue synth I have, my dear old Korg ms10. Otherwise I choose software versions of classic synths which I often then run out through a bunch of analogue boxes, various pedals, tape delay, reel to reel tape and back in the box. I do that all the time.

6. It’s evident that your inspiration is far beyond electronic music, it’s cinematic and classic. Can you tell us about few albums and movies that were on heavy rotation for most of your life?

Heavy rotation, hmm there are so many it’s hard to say which have had more influence. Inspiration comes from lots of sources. Often from movie soundtracks and from old music as I find the sound from old recordings appealing. But my inspiration also comes from other beings, experiences and challenges. It’s all about atmosphere and what you are feeling. Sometimes, and for long periods of time, I don’t listen to much music at all.

7. You sampled ‘Gloomy Sunday’ in one of your live sets, which has a dark legend revolving around it. It’s the ‘Hungarian Suicide Song’, yet you managed to turn that peculiar selection into an uplifting dance. Same applies for most of the samples you carefully curate. How exactly do you make these choices… and then pull them off?

I love the haunting feel of Artie Shaw’s version of Gloomy Sundays and I rediscovered it while I’d just started working on the track that turned into Let Them Not Weep. Again, it is not a thought out plan from the beginning. It’s mostly done by trying things out and let the inner navigation system guide and make the choices. It’s not done with thought. LTNW has uplifting elements but holds the feeling of tragedy. It’s all about the balance.

8. The density of your grooves is unmatched in the industry. Can you walk us a bit through your creative process of layering a track down to achieve this organic texture and groove?

I’m very glad you are feeling the groove – not quite sure if it’s un-matched but thanks for your words. There is not one recipe to how it’s done. It can reveal itself out of anything. Sometimes it’s like it’s there before it’s actually there, by listening to other sounds it pops out.

9. Your latest EP Twilight In Tankwa, coupled with your Nu – Man O To Remix have been taking over charts and dancefloors for the past few months. How did they come to life? And what does the future hold for Be Svendsen and his exponentially expanding global fan-base?

When we agreed on the the Twilight In Tankwa release on Rebellion, Damian asked me to first make a Man O To remix on Crosstown Rebels. This was a big honor and an even bigger challenge. How do you touch an iconic track like that? A milestone which pretty much defined a genre and doesn’t need a remix in the first place. What approach do you take when you start messing with a classic and everybody’s favorite?  Often when I do a remix, I end up changing the track quite a bit, sometimes beyond recognition, but it was important to me to stay very true to the original by somehow keeping the same atmosphere and still giving it enough twist so it wouldn’t be pointless. As an exception of the rule, more thought actually went into this than usual. There is a lot of psychology somehow, in how you go about winning peoples interest and curiosity when touching something this familiar to them. Almost blasphemy, ha. I learned a lot in the process and I’m very grateful that the remix was well received by the judges.  Twilight In Tankwa is a tribute to the planes of the Tankwa Karoo in South Africa where AfrikaBurn takes place, and the b side – ‘Scarecrow’ is a whole other story for itself. That one is special to me. In fact, they all are. All tracks should be.. What the future holds and what direction the music takes? I have the feeling you will hear more real instruments such as bass and guitar soon, and I could tell you about my ideas and notes for my long awaited upcoming studio month, but it rarely turns out as planned, so let’s wait and be surprised together.

If you had to give today’s producers a piece of advice, what would it be?

Record and grow your own sample library and be creative with it. Doing that plus re-using the same sounds in different ways in different tracks, adds personality and helps you create a sound that will be uniquely yours.