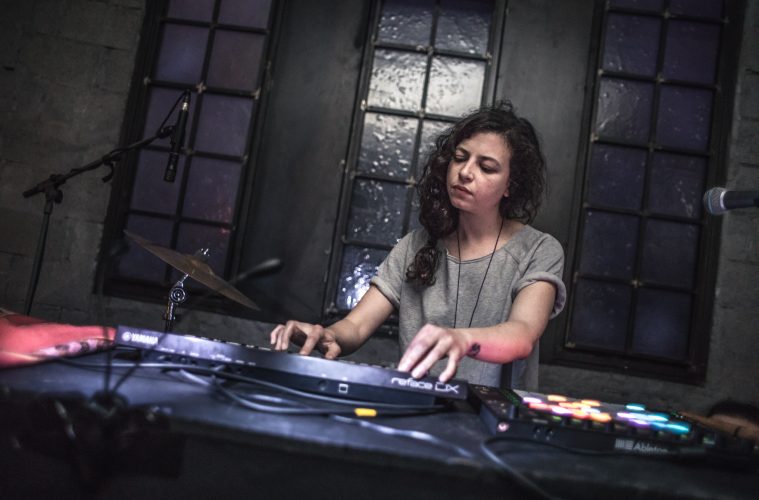 Storytelling through Music: The Flugen Interview

Finding her passion for music through percussions, Maya Aghniadis chose the drums at the age of 10. Since then, her relationship with music only evolved reaching her multi-instrumental project we know as Flugen. With a radiating personality and a sound that matches, you should keep an ear on what she has coming next!

We caught up with her ahead of her performance at SoundsGood Festival this Saturday asking her some questions from here and there, which she answered in true Flugen fashion.

Your studio is set in a village pretty far from the city. Why did you decide to move there? How does the location affect your creative process?

The space in the mountains is where I spent all my childhood. I already have a great connection with it. Also, since Lebanon is a very small country, I got used to driving long distances (that aren’t so long compared to the time you spend in traffic).

I decided to move up there because the space has stories to tell, tunes to be created through silence and a peaceful atmosphere.

How did you discover your passion for making music?

I was 15 when I first joined a band with my brother and two other friends. It was a Led Zeppelin tribute band called “Hot Air Balloon” and we used to perform a lot! I enjoyed the feeling of being on stage and sharing my passion for the drums at an early age. I started composing music just for fun when I was at university, while I was still the drummer of several bands including The Incompetents.

By the end of my time at university in 2012, I had written my first album Endless Trail. I decided to record it directly with the help of a producer friend called Carl Ferneine (from Loopstache). We produced and recorded the album in his home studio (drums at Tunefork Studios) and a few months later, we organized a release concert.

It was magical as it was by the sea in a very cosy spot with 500 candles lit all around us.

After that night, I felt like this was the path I really wanted to take. My passion for making music grew exponentially, so I went to study film scoring to take it to the next level. You traveled to study music for film and came back to create a sound so particular to you. Tell us about the journey to discover your signature sound.

The film-scoring program was only a one-year program but it was very condensed with many musical cultures to discover; from classical, experimental, gypsy jazz, ambient melancholic, theory, to orchestration and improvisation.

Almost everyone was focused on epic music but I wanted to take bits and pieces of all the styles and techniques that inspired me. I was just experimenting at first so I wasn’t planning on creating anything in particular. My new aim was to tell a story with less words and more music. So I adapted the “story telling” technique to my compositions and that’s where the signature sound began.

Flugen is a word I used to say when I didn’t know what to say! I think it could mean “Flights” or “Fly” in German but I am not sure. Let’s say it’s gibberish for whatever you want it to be. But if you look it up online you’ll discover that I’m not the only one who believes in it!

You use different instruments and tools in your live performances and it must be complicated to manage all at once. How much planning goes into preparing for your lives? What about improv?

It depends on the duration of the performance and the venue. Sometimes I add the piano, sometimes half a drumset or djembe to add a human touch to the sound. It’s a matter of organization and practice because the more you know your loops and story, the more you expand your freedom and improvise through them.  I like to merge songs and create the transitions during the live set so that I never get bored of playing the same song.  There’s always a new point of view to it but you still stick to the main melody and story.

Ranking second in BBX, how would you describe your experience at the competition? What’s your take on the emerging scene in Beirut?

It was a great experience sharing my music with a new crowd. I never expected to be chosen as a finalist and it all happened so quickly!

I think a lot of good music is coming out; a lot of mentalities are opening up to new sounds and new musical approaches. Festivals are taking over this summer in a very professional way. Good stuff is going on!

You’re playing at SoundsGood festival this weekend. What do you have planned for us? The drums are seen as a pretty unconventional instrument for a young girl to adopt. What attracted you to it the most? Does your drummer background still manifest itself in your music today?

I was 10 when I took my first lesson and I fell in love directly (also, I had just cut my hair short and was bored with classical piano).

I think the drums apply to all instruments because once you synchronize both hands it all becomes easier. You start playing drum rhythms on the piano (which is a percussion instrument as well), the guitar and even the flute!

Since you have a background in film, what’s one movie you wish you could score?

What are your future plans?

Working on my next album and performing as much as I can! Stay tuned.