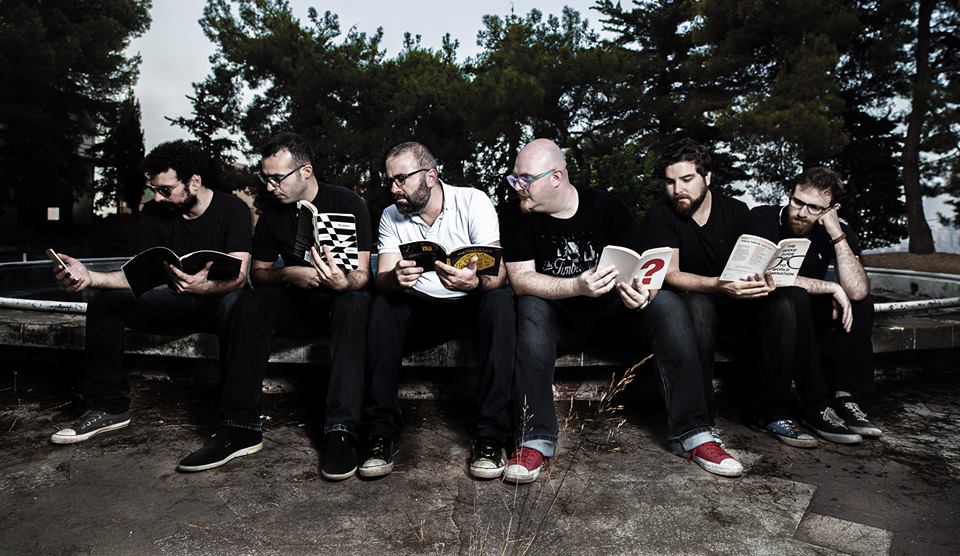 Founded in 2006 by dynamic brotherly duo Toni and Fouad Yammine, Meen is a Lebanese band most known for popularizing Lebanese rock through sarcastic and outspoken lyrics, thereby peppering traditional rock music with the flair and attitude of their native language.

The band currently consists of 4 members in addition to the Yammine brothers including drummer Ralph Choueiri, lead guitarist Joseph Hammam, keyboardist Bernard Najm and bassist Makram Abulhusn, which makes up a 6-member lineup in total.

Revolver sat down with founding member Toni Yammine to talk about Meen’s artistic evolution, from inception to the release of their latest album just a couple weeks ago.

Let’s go back to where it all started. How did you develop and nurture your passion for music into founding a band solely dedicated to Lebanese rock?

It’s a bit strange actually… I learned how to play the guitar at a young age and bought my first guitar at 17. At first, it was just something I did for fun but then I unconsciously started to write songs, mainly in English because that’s what I used to listed to at the time. After a while, my brother Fouad also started playing the guitar but the first time we ever came to write a song in Lebanese Arabic was for a competition launched by a Lebanese restaurant where we had to compose a song about the environment. Songs written by me and Fouad then started to pile up and spread among our friends at university and otherwise but although there was still no official band back then. In 2006, we ultimately decided to drop a one-song-only album (Nashid El Banadoura) and had everything ready and all the CDs printed and all when suddenly the 2006 war broke out and changed our plans. So we went on to release another song titled ‘Kamlo l Hareb’ which was written, recorded and filmed in just one day before I uploaded it to my YouTube channel. YouTube was just kicking off at the time and people started to listen to the song and share it with their friends. And once the war was over, we decided to throw a concert at the Beryte theatre (USJ) on November 11, 2006 in order to launch the band officially. The 250-people venue was fully packed and I had already hunted for musicians to join in and complete the band for us to be ready for this concert. Some band members changed after that until we reached our current lineup in 2008 and remained the same.

What did you mean by naming the band Meen?

It was for two main reasons: first, because it was fun especially that we were just starting out and were not that known so people would ask like “meen?” (Arabic for who) and second because ‘Meen’ also connotes ‘Yammine’, our family name. Everyone seemed to like the idea when they first heard of it but at the end of the day it’s not about the name you pick as the audience will not connect with you unless you build a name for yourself afterwards.

How would you trace the evolution of Meen’s sound and creative process over the past 10 years?

The nice thing about Meen is that it has preserved its identity and style over the years. A lot of Lebanese bands underwent drastic changes over time, which is not necessarily a bad thing, but we’ve always remained the band that sings Lebanese rock with a sarcastic feel. Our tools also evolved as in we now have the power and control to make the sounds we want and record/arrange them however we want without being bound by budget constraints like we used to be when we first started. Our first album for instance was mixed and mastered by me but then you reach a point where you have so much on your hands which is why we sent our latest album and the one before it to California for mixing and mastering. In addition to that, we’ve also grown as individuals. We were kids 10 years ago but we have become more mature now (almost half of us are even married!) and this has led to a change of attitude in terms of lyrics and compositions, although we never lost the spirit we had when we first started.

In what way would you describe your music?

Our sounds are western by all means. The lyrics, on the other hand, are purely and authentically Lebanese which is why it is very common from people from other Arab countries not to understand some parts because they are exclusive to the Lebanese spoken language. These lyrics represent Lebanese youth as in they do not feel alienated but rather naturally identify with them as spontaneous manifestations of their everyday language in all its colors (including French and English words that we normally use in spoken Lebanese). This is what makes our songs authentic and easy and brings them closer to the Lebanese public.

Tell us about your new album. What was the main inspiration behind it? And how did the launch event go?

The launch was great. It took place at a small venue that fits 70 to 80 people but the event ultimately brought together over 500 people to the point where fans were queuing outside the venue. The atmosphere was cool, everyone was excited to discover the new album and we ended up playing a few acoustic songs on the spot which was amazing as well. As for the inspiration and recording process, as a band we always have a number of songs written and put aside so whenever we decide to record a new album, our main challenge is to figure out what to pick and find the time to record. For instance one of the songs on our new album (Djejeh Bil Berrad) was actually written by Fouad’s friend during their first year of college and shelved for many years until we finally decided to use it in the album. The album took us a long time to finish, we started recording in 2013 and released it in October 2016 mainly because we only get to meet in full once a week since each of us has other time-consuming jobs besides music. It also has no name/title whatsoever on it, which means that people might not even know who’s behind it if they spot it on a music store shelf but for us we called it “Rishineh Bel Kalash” and the album art representing cupid holding a Kalashnikov instead of an arrow is inspired from the work of a French graffiti artist. The album has a total of 13 songs including “Al Mkhadeh” which talks about what we dream about at night and a cover of Ali El Deek’s Samra Wana Hasoude (believe it or not!) which represents the opposite of everything Meen stands for recorded in an interesting heavy metal arrangement. This one basically started as a joke but then we were like ‘why not?’ and it turned out to be such a fun paradox.

And what about the recording process? How do you usually go about it?

We have this routine whereby we have all band members listen to a song of choice that Fouad and I wrote and then distribute the work among us and start working on it. We then record the first arrangement for reference in order to use it as a rough draft later on because sometimes you tend to forget some details so this way we make sure to prevent it. One fun story has to do with our bassist Makram. He used to lazy out or come in late to rehearsal so we started coming over to his house for rehearsal and the best part is that he’s always been happy about it.

What’s your take on Lebanese rock today, especially being one of the first bands to introduce this particular music genre to the public?

We are glad to have positively contributed to initiating this musical trend and influenced other Lebanese bands to sing in their own language. I’ve always wondered why rock bands here tend to sing exclusively in English when people all over the world have been singing rock in their respective languages, so I thought why not sing just like we talk. Even I used to write songs in English at first but then I found a better outlet of self-expression in writing and singing in my spoken language. Of course there were some individual artists who did Lebanese rock but there was no band solely devoted to this particular genre so we kind of set the trend and paved the way for other bands to embrace it.

Since we’re on the topic of music genres and artists, what are some of your musical influences?

Our influences are pretty diverse, actually. Fouad and I are fond of classic rock music. The Beatles are huge influence for us, and so are bands like Pink Floyd, Oasis and iron Maiden. In terms of oriental music, we love Fairuz, the Rahbani brothers and Philemon Wehbe. Bernard likes reggae, Makram is all about jazz, Ralph loves complex heavy metal arrangements (read: Dream Theater) and Joseph is so into blues.

Has the idea of founding a political party ever occurred to you guys?

The purpose of our creative work is pure entertainment, we have fun making music even though we do address serious topics. For instance, our song “Nashid El Banadoura” may sound lame and effortless at first but if you really read the lyrics you notice the deeper meaning/message it conveys. You just have to read between the lines. And although out lyrics have a bit of politics in them, it’s always from a social perspective and not a political one per se. This being said we already have the Banadoura party and its corresponding flag/movement.

What piece of advice would you give to up-and-coming Lebanese bands based on your own experience in the local music scene?

Don’t change. Make songs that look and sound like you, songs that reflect you. Also talent is not enough, you got to work on your skills and read into successful songs in order to get a sense of what makes a hit song. Do not philosophize things but rather strive to be authentic at all times. Play live as much as possible, put your music out on the internet for people to listen to. And most importantly be sincere because people will eventually know who is sincere and who is not with time.

And finally, what’s cooking for Meen in terms of future projects?

We have many concerts coming up and we are planning for a mini tour this time. The concerts should kick off in 4 to 6 weeks’ time as we are still finalizing the deals but we have plans to go outside Lebanon and perform at Arab and western cities.