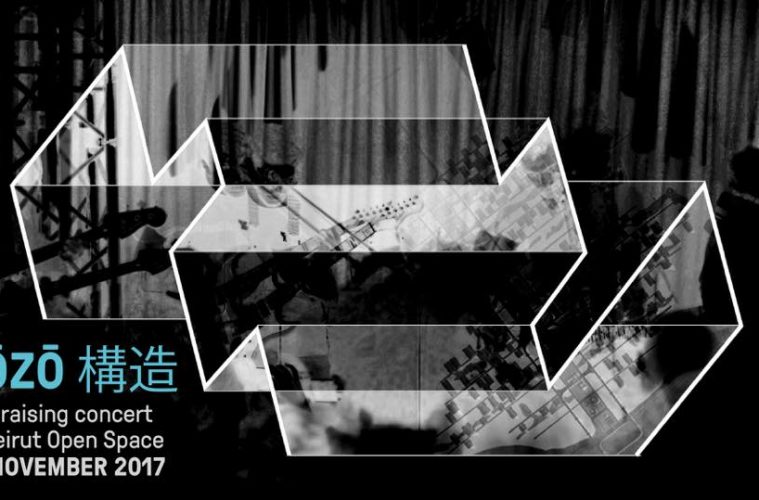 A few days before their fundraiser concert at Beirut Open Space I had the chance to interview Kōzō 構造, a band with both an intriguing sound and name.

Starting off with the name, please tell me more about it.

Kōzō 構造 literally translates to structure and it’s ironically what we spend most of our time arguing over. We try to think of certain spaces and ideas behind buildings and monuments when we write music either by transposing structures into notes and passages or evoking the same feelings of certain spaces through melodies. Our writing sessions end up looking a lot more like design workshops than kids with guitars.

How did the whole thing start?

It all started when we performed at Beirut Wave Three where we got the chance to record and release our debut single “Don’t leave! Kurokowa!” with Tunefork Studios and Beirut Open Stage.

Your music is usually described as Post Rock, how would you describe it? And how come your songs are extremely catchy even though they’re mostly instrumental?

I see how people can include our sound in this category, especially after our single that is explicitly a post-rock ballad. But, being honest, we get bored sticking to one emotion or genre, we tend to approach songwriting in a more liberal way letting each song a different mood which resulting in a much more diversified set of tracks.

As for being catchy, well, we tend to write our melodies as if we’re writing a pop song, shamelessly. We make music that our listeners enjoy as much as we do when performing.

Your concert on the 26th will raise funds for your upcoming album, and knowing you guys, I expect a concept record, showing-off your creativity, talent and musical skills, what should people expect?

The album is going to be largely instrumental although we try not to shy away from experimenting; be it with vocal harmonies, spoken word or even field recordings. Conceptually, I think we’re going to keep feeding into our interest in architecture. The album is a trip in Japan, more specifically, post-World War II and we’re going to be looking at the architectural thoughts and movements that were the result of the war, all in a very contemporary palette. The plan is going for a full length album of about 8 tracks, all discussing metabolism and buildings that revolutionized Japan (from Kurokawa’s Capsule Tower to Kitutake’s Sky House) but we aren’t straying far from our Arabic roots. Arabic vocals flood our songs, only a result of our natural way of talking. We speak in Lebanese/Arabic and to us at least singing in any other language doesn’t feel right – we try to keep it real.

Where will you be releasing the album, label wise?

We are independent at the moment but we definitely plan on finding ourselves and our music a home to nestle in. Although we do have a few labels we are personally fond of, we don’t think discussions concerning that issue are going to take place until later development stages of the album.

I’ve seen you share stages with great musicians, will you be collaborating with anyone on the album?

No plans for now, but we really enjoy it when impromptu collaborations happen. From when we had wonderfully talented bassoonist Szabolcs Nigo from Belly Of Paris play during one of our calmer tracks (Capsule Tower) to the time we shared the stage with El Rass during Oakenfest for a freestyle rap over our song (Atama), we love when this happens and hope that translates well into the studio.

Closing with a plug, can you tell us about the fundraiser?

The 26th of November at Beirut Open Space. We’re going to play the entire draft of the track list we have back to back so it’s very much us putting it all out there. It’s going to be a very intimate night in a very intimate place that already feels like home and hopefully everyone attending will feel the same. To add to that we’re ending the night on positive note with a super fun DJ set by Michel and Rayan of WonderGaap. All funds will go directly into studio time. We’re aiming for a release date around mid-to-late 2018.