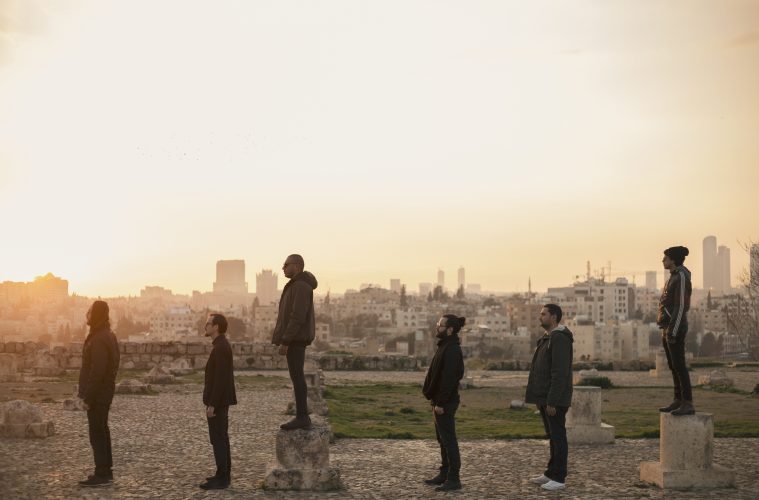 Ayloul, an indie band from Irbid, Jordan, was formed in September 2013 by six students who met at the Jordan University of Science and Technology. Their music merges cinematic Arab roots with indie rock, giving oriental music an emotional tone that reflects the dramatic power of the east. Through their lyrics, the band doesn’t shy away from giving a strong critique of the socio-political situation in their home country. They recently released their debut album “Salute to Al -Ghor” and signed with Universal Music MENA.

Get to know them in the interview below! Being an alternative band from the Middle East comes with a lot of expectations and stereotypes. What’s your take on this and how do you deal with it?

If you mean the expectation implied through mainstream media and Orientalism, this is true. However, this has been changing gradually for the past years as more channels are open to communicating ideas, share music, and get a better understanding between cultures and nations.

Stereotypes and expectations are there for anyone, any region, any culture. The Middle East with all the struggle and pain it is experiencing is getting more interest and curiosity from people around the world, to learn more about it not just through news but also through its art and literature, and even through spending a few years in the middle of the Middle East.

For Ayloul, it has always been about who we are, not about meeting expectations or standing out but being ourselves and communicating that through our music. We hope that our debut album is a right step in that direction.

Most of you have moved from Irbid to Amman because of work. Has that changed your perspective? Is that what fueled your songs with the hatred you have for the concrete jungle?

We would not call it hatred. It’s more of anxiety and the feeling of disconnection from reality Big cities create a parallel unnatural reality that goes against our feelings and instincts, on top of the complications of the daily routine by all that claims to make it simple—from technology, to transportation, to Mega Malls and more. This eventually adds further complications and keeps us on our toes, stressing about what does not matter to us as humans in reality, but is crucial for our parallel reality as a gear in the machine producing the very important nothing. Many people are aware of this and are stuck in the middle. Being in a big city is a must to get a decent job, a decent gig, or even to attend a concert. These are our modern chains for which we – consciously or not – trade our humanity, individuality, and freedom…  As Bob Marley says: “No chains around my feet…  But I’m not free!”

The attention of the crowd was unbelievable

It’s not easy having six members in a band, especially when you have jobs and don’t all live in the same city. How do you manage to find the time to work on our music, rehearse and perform?

We try to maintain a fixed but flexible practice schedule for whoever is in Amman. Nevertheless, all of us meet around once a month or every other month, depending on whether or not we are working on something specific. Sometimes when this or that is not possible, we take the “rehearse and perform” approach. Your lyrics are loaded with heavy political and social critiques. If you could choose one of your songs and turn it into a campaign, which one would it be and why?

Bahr Mayyet—it is about what is called “honor crimes” where someone claims the right to take the life of someone else to “defend their honor”. All appreciation to the campaigners actually working on the ground, talking to people on the streets, and chasing for legislation changes to protect innocent lives.

You’ve mentioned that you struggle to find proper venues for your performances outside of Amman. I think that’s a struggle shared by many alternative artists in the Middle East. Where do you draw the line between compromising sound quality and the need for a decentralization of the music scene?

Maybe the bigger challenge is in finding suitable venues, rather than getting a good sound quality.

Two of our most enjoyable shows where in Irbid and Al-Salt, where we had some challenges getting the sound we want, but the energy we got from the crowd was amazing.

The attention of the crowd was unbelievable. They were focused on the music and the lyrics, and discussed the messages in the songs with us after the shows. It was a very rewarding and rich experience and it made it worth the hassle and the technical issues.

Pink Floyd is an inspiration for you as a band. What other artists/bands have influenced each one of you on a personal level?

The alternative scene in the Middle East always provides great inspiration for us. Mashrou’ Leila, 47Soul and El Morabba’ are great examples from the region of successful projects with unique sounds.

Your long-awaited debut album “Salute to Al Ghor” is now out. Congrats! What’s one of the hardest challenges you had to overcome while working on it? Any funny incidents worth sharing?

One of the challenges we faced while working on the album was to reach a stage where we are satisfied with the music. You can always find something to change in your music, to make it sound or feel better (or so you think); maybe the biggest challenge was to know when to stop changing and start recording.

Fun fact, we had many ideas for “Ya Rait” but eventually, we decided to give it a shot and improvise in the studio, and that’s how we got our beloved 9th track on this album.

The nature of the music you make requires complete artistic freedom. You’ve recently signed with Universal Music MENA; how do you plan on maintaining your identity as an indie band with the requirements that come with such a commitment?

Let us take the chance here to value our partnership for this album with Al Balad Theatre for the production, and with Universal Music MENA for the distribution. This partnership was very valuable to keep us focused on our music and to get the album out sounding how we wanted.

We felt the appreciation of and the respect for our artistic freedom from the first day with no interference whatsoever in the content or representation. We’ve had and will always have this freedom.

What do you have lined up for the future? Do you plan on touring the new album? Can we expect to see you in Lebanon?

We will start touring the new album soon, from Jordan through the Middle East and concluding the tour later this summer in Europe… We’ll share the dates and venues soon, and hopefully we’ll be able to play in Lebanon this year!