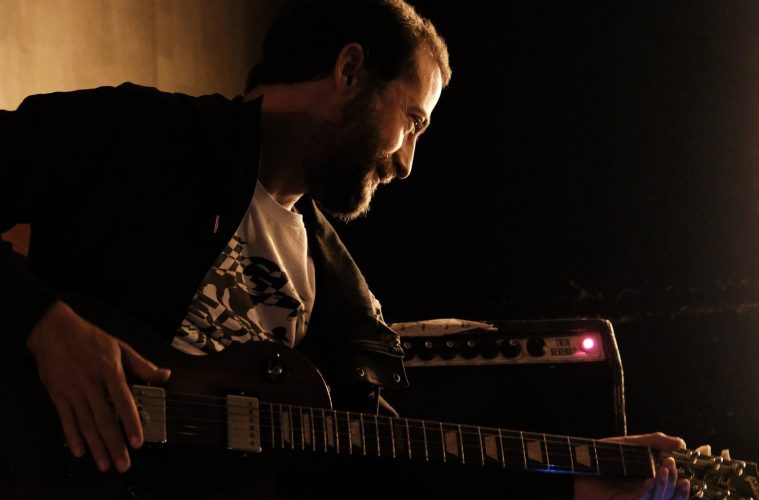 A Glimpse Behind the Curtains: Sharif Sehnaoui Talks Irtijal and Beyond

The FIM (Free Improvised Music) scene in Lebanon was born, developed and maintained by MILL (Musique Improvisée Libre au Liban), an organization founded by Sharif Sehnaoui, Christine Sehnaoui Abdelnour and Mazen Kerbaj in 2000. Irtijal (which translates to “improvisation” in Arabic), the experimental music festival that celebrated its 18th edition this year, was born soon after. An aftermath of the Civil War, Irtijal is not limited to musical performances but also includes different artistic manifestations that celebrate improvisation, alongside workshops taught by reputable artists in the FIM scene.

Sharif Sehnaoui gives us a look behind the curtains as he talks about his journey as a musician, homesickness, the greatest challenge he faced, experimental music and Irtijal. Read till the end for a fun fact Sehnaoui shared about himself! What made you want to be an experimental artist/free improviser instead of an artist who identifies with a specific music genre?

I guess the answer to this is quite simple: there was no specific music genre that I could fully identify with; not that I don’t like any genre, on the contrary, I have a tendency to like everything. I guess experimenting gave me the impression that I could create new identities, but also reincorporate preexisting musical ideas whenever I felt it could be relevant.

You were living in Paris for quite a long time; what made you move back to Lebanon?

Homesickness. Even while in Paris, I would be back to Lebanon at least once a year, and doing things here would give me a special kind of kick and an enhanced motivation. I felt that this is a place where much was needed, and that doing things here was, for me, more important than anywhere else on the planet. Your performances as an experimental artist entail improvisation and spontaneous interaction with other musicians; what would you say is the greatest challenge you had to overcome on stage during your career?

It’s always a trip into the unknown for both musicians and audiences. You can both experience failure, but also truly exceptional moments where everyone finds hidden resources and a unique balance among players. There are here many stories to be told, but the greatest challenge for me that I can remember to this day was a concert in New York in 2005 where I had to play half the concert on electric guitar without an amplifier, I tried hard, I failed and eventually gave up…

When we say “experimental”, the first thing that comes to mind is freedom and perhaps few to no rules. What do you think is the criteria for someone to be a good experimental musician?

There is no such thing as experimental music; it’s not a style or a practice in itself. Over the years, it has become a label we use to unite a big variety of styles and genres that do not fall within the mainstream. The common thing though, I would say, is a dedication to novelty and research, and the desire not to play/compose according to preexisting parameters that usually define a musical genre. Having no rules is a possibility of course, but most of the time we find that it is in fact the artist who sets his own rules, and in many cases they can be extremely strict, that would not necessarily exclude the use of the word “experimental”.

The best part of it is that the pleasure of playing remains intact, if not even bigger today than it was before

You’ve performed with artists from different countries in and outside of Lebanon. Can you tell us about one of the best performances you’ve had and what made it so great?

We’ve had a pretty unique performance this march, possibly one of our best to date. It was The Necks + “A” Trio playing a 4 hour concert in Berlin at Krafwerk. It was an all acoustic set, no loops or samples and quite intense throughout. The feeling we had onstage during the fourth and last hour of playing without any break was truly exhilarating. What would you say is different about your sound now compared to how it was when you first started making music?

Pretty much relating to your first question, I would say that I am currently trying to touch on various types of music that I love, rock, jazz, maqam… using them in my own way, blending them with all types of noise and unorthodox techniques that I developed. Today you will hear much more traces of all of this in my music than, say, ten years ago.

You’ve been part of different projects with Mazen Kerbaj who’s also a prominent figure in the scene; what makes the two of you so compatible music-wise?

My relationship with Mazen is a true blessing. We’ve been friends almost since school and really evolved artistically and musically in parallel. Still to this day, we are able to challenge one another and help each other develop both our playing and our ideas. Recently we played our 300th show together, and we know each other so well that very little can go wrong. The best part of it is that the pleasure of playing remains intact, if not even bigger today than it was before.

Irtijal, the experimental music festival you founded with Kerbaj, started in 2000 and is still going strong. Can you tell us about how it all started?

At the time Mazen and I were fascinated by free improvised music, and were attending festivals in Europe whenever we could. The idea to have one in our hometown was simply very appealing to say the least. Now, free improv itself emerged from other roots: free jazz, musique concrete, contemporary music, electro-acoustic music, etc… so we immediately thought we cannot limit the scope of the festival to strict improvisation. And fortunately, today the festival is trying to feature as many different styles of music as possible, while remaining true to its initial spirit. From its tough beginnings, the festival has now reached a decent international standard. Everything was bound to evolve positively, as the whole Lebanese musical scene was mutating to become the very vibrant one we have today. Yet, we like to say that if someone told us back in 2000 where the festival would be today, we would have probably thought that this person is totally crazy!!!

When something as raw as improvised music is being performed on stage, the audience might react to it differently especially when they do not know what to except. What would you say are the characteristics of an ideal crowd?

In the late nineties we were doing regular sessions in a studio in Paris when a man, who was one of the musicians’ friends came in. However we did not know who he was. He asked if he could join but then seeing that we were giving him skeptical looks he added: “Don’t worry, I only play with my ears”. That sentence still resonates a lot for me some 20 years later. So to answer your question, I think that this is the ideal crowd for free improvised music: musicians playing, and a crowd of people playing along, using their ears as an instrument.

What is a fun fact about Sharif Sehnaoui that very few know about?

I always hated guitars. Sorry about that.