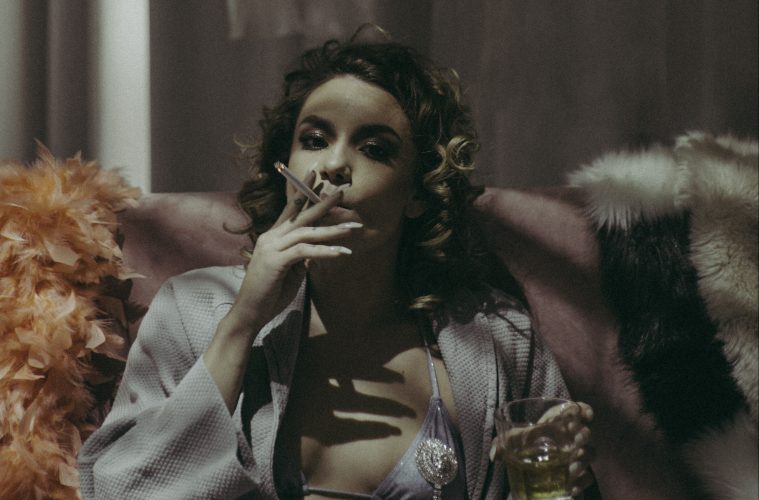 Blu Fiefer is a Lebanese/Mexican artist brewing Gothic Hip-Hop from the comfort of her bedroom, all the way to the #1 spot on iTunes.

To celebrate the long-awaited ‘The Prelude’, we put our glam on and headed to The Ballroom Blitz for the EP release party, where she welcomed us backstage for a chat while she was getting ready. In-between laughs and color palettes, with Hip-Hop hits playing in the Ballroom behind us, we talked about Blu’s music, her inspirations, pole dancing and future plans.

Get to know Blu on a personal and professional level in this spontaneous, unfiltered interview: Can you tell us something that not everyone knows about Blu Fiefer?

I don’t know, I’m pretty open about things… Actually, that I’m nice. I know that’s really weird to hear but when people meet me they go “OMG you’re so nice!” and I’m like “Did you think that I wasn’t?” and they say “no but you just seem like, you know…” They always say I know and I never know so…

How did the Girl’s Gotta Eat video clip come together?

I put out a casting call on my Instagram for women of all shapes and sizes and for drag queens and the response was overwhelming! I just threw a party and invited people who feel passionately about equality, and who share the same beliefs. It was really organic, I mean we really just had a good time and shot it. I wanted the video to really be authentic and give them and myself representation. The reason why I used Arabic references is because I think the context of what we’re doing—being in Lebanon, being in an Arab country—is just such a different context than if I’m in London or America. I think that a lot of music videos that come out, specifically here in the Middle East, are very filtered and washed out. I wanted to do something different. Since you mentioned London, you studied there and you lived there for quite a while. What made you come back and start a career here in Lebanon?

I don’t know if it was a choice… I hated school there, I hated the way that they were teaching me things—it was structured in a way that doesn’t help me grow as an artist. It gave me a good background because it helped me understand a lot of things about music technically but creatively, it shut me down. So what I did is revolt from that. I was very upset about the situation, I was very young, and I had left everything in order to be there and eventually I wasn’t happy. When I came back here, I guess one thing led to another and that’s how things went.

Today I was looking at the messages I got from people on Instagram and I was tearing up because I don’t think I’ve seen an artist—in my genre at least, or doing English music—in my country with such a cult following. It’s not like I have millions or thousands of fans; it’s just that the people who are aware of me and like me, truly f*ck with me. It’s really overwhelming and I’m really grateful for that. I pole dance because I like it, not because I think it’s empowering… I only realized that people feel that way about it later on. With what I’ve done, my achievements, and where I’m going, more doors should open for me. However due to the absence of an industry around what I do, I have to do so much to get so little. It’s frustrating, really. I work my a** off. This has taught me so much, I’ve had to learn how to get everything done myself.

But I’m hopeful because I’m getting messages from people wishing me luck for the show and when I ask them why aren’t they coming, they’re like “I live in Egypt”, “I live in Canada”, “I live in the US”. So that’s nice and I hope that grows as things unfold.

Do you think that you’ll be able to maintain the personal relationship you have with your fans once you grow more as an artist and you’re at a more advanced level of your career?

It’s funny, today my agent kept telling me to get off my phone and I’m like “these people are asking me questions about the show, they’re sending me pictures of what they’re gonna wear because they’re so excited”.

Growing up in so many different countries and always being ‘the new girl’, I never felt like I could truly be myself, I always felt like I was putting on an act. All these fans come from different backgrounds and I feel like we have something in common, I care about that relationship more than anything. I invest and lose money when I plan a show because I care so much about the details of the experience and how the audience feels, I put their experience before anything and I know that they feel it.

There’s this fan in Tripoli who transferred money to a person he saw was coming to my show from a repost on my Instagram story, so that he could get him a physical copy of the EP. All these things are really important to me. I haven’t gotten to a point where I felt like I couldn’t handle it or that I don’t wanna answer their messages. I like having conversations with them and asking for their opinions. I’m hopeful that I can maintain a relationship with them, especially the ones who have been there for a long time… Those real ones I’ll treasure forever.

What was the first thing you did when you found out that Girl’s Gotta Eat hit #1 on iTunes?

First I called everyone I know to make sure that it’s real and that no one is playing a joke on me! I would be like “Can you just open your iTunes for me?” and they’d say “You’re #1 on iTunes” and I’m like no no… and I’d call someone else and so on… It wasn’t until I called like 10 people that I believed that “okay, this is really happening. It’s not a glitch, no one’s playing a joke on me.”

Now that you have an EP that’s out and we’re at the release party, what’s the next step?

I want to spend my time performing. I love doing shows—although they’re stressful and can be draining especially when I’m organizing. I wanna continue writing the album (which I’ve been doing for over a year now). Actually, the first song I’m playing tonight is from the album, it’s called Diamonds. My writing process is very much based on where my life goes so it always changes but I wanna write, I wanna tour, I wanna promote my EP ‘The Prelude’ and explore the new set of opportunities coming my way now that the music is out. Since you’ve performed at different venues, where’s your favorite venue and why? What made the show so memorable?

I’ve honestly played at the shittiest and the best venues, really. But for me, it’s always about the crowd. I mean I played an encore show at a basement once and there was around 70 people I think and it was amazing, people were singing every word of unreleased songs! I also played AUB Outdoors, a 20,000 people festival, which I wasn’t expecting much of for some reason, but it turned out to be incredible and the crowd there is the reason why Girl’s Gotta Eat was eventually even on the EP, initially it wasn’t even planned for release or finished. But I sang the one minute demo there (at AUB Outdoors) and the response was so overwhelming that I thought “no, this is going somewhere and I need to follow it”. This is also why shows are important to me… you get to feel people’s reactions and you feed off it and build on it, it’s such an important conversation.

…what about performing abroad?

In 2016 I performed in London for the first time, I was opening for an opener and there was like 17 people—I counted them while I was performing—they responded very differently. I kept getting emails from all these industry people afterwards—more emails than the actual people who attended. I would ask them “how did you hear about me?” and they were like “oh my friend and her friend were there and they told me that it was very cool to experience you in such an intimate setting” I thought that was crazy. I went back to London last year and co-headlined at the Institute of Contemporary Art and there was a lot of the same people from that first show, so it’s really not about the venue or the number of people, it’s about the energy and the story around it.

… so when you say touring, do you mean in Lebanon only?

I think we wanna try to do Dubai, Paris, London, and hopefully go to the US this year and see how that goes. It all depends on how the EP takes shape. The way tonight’s show goes will also play a major role in how things unfold. I never feel like I have the option to stop. I have to keep going. I feel like this is what I’m destined to do; it’s not a choice.

It’s just the way that I’ve always expressed myself. What I do is use all these things that I know how to do (writing, directing, editing, dancing, singing etc..) to tell the same story. Everything is connected; it’s all about storytelling for me. You’re always very busy since you do everything yourself but you do have some free time. What’s one hobby you enjoy doing?

I like a good party. I like to go out and meet people, write stories about them. I go to clubs and stand in the corner and observe people. I like to talk to random people about random things. I use that experience to write music.

…what’s one story you heard that really touched you?

Honestly too many to single one out but definitely the stories that people share with me about their personal journey and how my music or unapologetic way of being inspired them. It always shocks me to hear how much of an impact just being yourself can be on other people in a society where we are so conditioned to act in a certain way. I hope to continue to live up to that and lead my philosophy by example. Honestly? Ballroom’s backstage! I mean this place is f*cking beautiful! Have you seen the bar?! I love it.

And I’m not saying this just because I’m performing here tonight but I don’t think we have something that compares to The Ballroom Blitz in terms of quality for live performance. I mean we have great clubs but look at the backstage here, there’s a private bar, there’s a tunnel that takes you to the stage, the lights are beautiful, the sound is great… I salute them for what they’ve done with the place! It’s also about the company. I mean, you could be on the stairs somewhere or in the club and if you’re not with the right people, you’re not gonna have a good time…

I hope you enjoy the show!