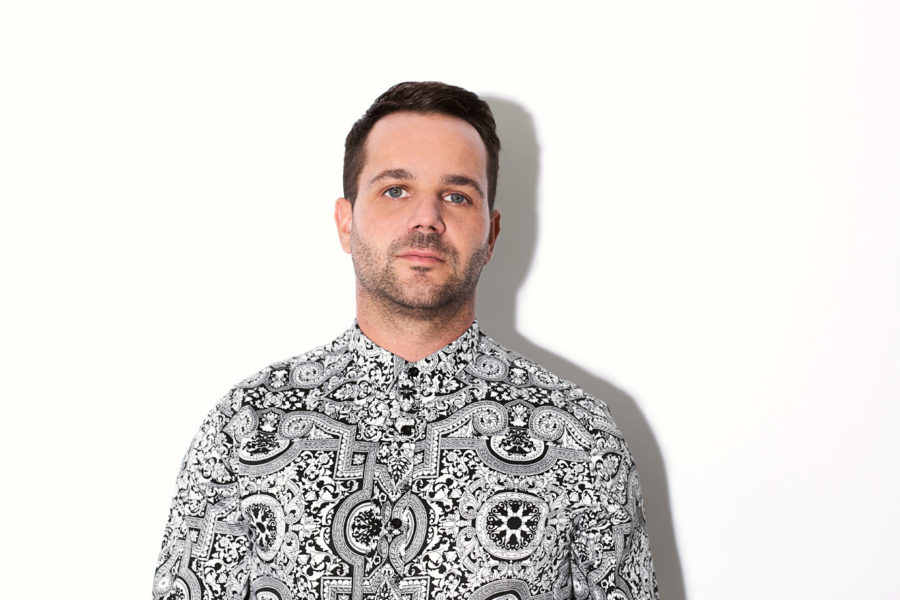 Alex Niggemann, AEON label boss, producer and world renowned DJ, just dropped his EP ‘Hurricane’ yesterday. We caught up with him to talk about the EP that showcases the beginning of a new chapter for his melancholic-pop-driven alter ego. On the eve of his label’s showcase in Beirut at The Grand Factory, we picked his brain to get to know the man behind the music and the journey behind the man. Here’s what happened.

1. Your brother introduced you to techno when you were 15. How would you sum up coming from being a fan then to a worldwide phenomenon?

First it was a young boy’s dream, then it became hard work to fulfill it… and now I’m really happy that the hard work paid off and I can live my dream.

2. You’re a strong advocate of innovation and diversity in a somehow homogeneous international clubbing scene. But innovation in a standardized scene requires risk taking and confidence. What do you think DJs should bring to dance floors to take the audience out of their comfort zone and give them new experiences?

Their own style, which should not be influenced by the scene or media. Everybody can read magazines and play the same top 50 tracks, but this doesn’t make you stand out. Same thing when it comes to production.

3. Your ‘Hurricane’ EP drops on Friday on Balance Music. This seems to see you fusing a more ambient electronica with your signature sound. What drove you to explore these territories of sound and where would you go next?

To not do what everybody does or expects from me. I’m an artist…that means freedom of creativity. If I’m not allowed to do different or people don’t like me anymore because of that, in what kinda world would we live? A world in which everything is the same and boring. Freedom, creativity and innovation make it special.

4. You started making music at 16. A lot of changes have happened to the industry since then. Can you walk us through some of the challenges you went through back then that have changed for upcoming artists just getting into the scene now?

Times have changed. Social media is a very big factor. I think therefore the respectful distance between artists and fans has gotten less, due to your idols seeming to be accessible and closer to you. One example is that nowadays people write mass mails as demos instead of sending a personal letter and tape with something special. The increase of interest is caused by a hype created through media and marketing. Technique and machines make it easier to be creative today. Social media suggests that you don’t need much to become “famous”. And yeah, people like to be famous and earn easy money. For some it feels like,  “just play Beatport top 100 with Sync Button, release tracks only consisting of Loopmasters loops & set up a fan page with some press shots” and that’s it. The “industry” right now is hunting for new “talents” to hype them up fast. Point is, careers don’t last too long anymore; managers and labels make bad deals because they just want to earn quick money. The industry is in a bubble right now like it was in 1996/97. When I started, I had to work hard so that my music was finally heard. It took me 7 years to be confident enough to send demos to labels.

5. This is not your first time in Beirut, you’ve played here before and yet you’re back again. What do you think of our city?

It is one of my favorite places in the world! Honestly, the clubbing culture is great, the people are sooo nice and friendly and your food….wow!

6. Take us through a couple of the albums that influenced you as a person and an artist?

Lots of Hip Hop in my teenage years, Like Nas “It Was Written” or Dr Dre “Still D.R.E.”. Later on I was more influenced by mixes more than albums, as they were more accessible for a teenager preferring to spend money on technique and weed. The Carl Cox Global Series was one of the first mix albums I bought. But EP’s like Jeff Mills “The Bells”, Laurant Garnier’s “The Man With the Red Face” or a lot of tracks from Johannes Heil and Larry Heard aka. Mr Fingers guided my days.

7. What inspires you? Tell us a bit about your production sessions and your creative process? How do you start your tracks? What workflow you follow? How do you finish and refine?

Usually my surroundings inspire me, and what happens in my daily life, which creates the mood of the day. But I listen to a lot of classical, ambient or electronica that also gives a lot of inspiration. So usually I start from scratch, creating a beat or a melody first and then add up instruments. The creative part takes a day or two. Then I start arranging and mixing which is the “work” and therefore it could take 5-7 days, if I had that many days in a row.

8. With this new EP you set out to blur any boundaries between house and techno, avoiding petty sub-genres. What inspired this goal?

To get away from all these unwritten laws that are made through managements, media and labels of this industry that are trying to rule our career. I don’t want to fit a certain genre or scene. I want to do what I love without restrictions. And this music is what I listen to in my free time. So is there are rule that says just because you are a techno DJ, you are not allowed to make different music? No! So…

9. Tell us about your label AEON that you’re showcasing in Beirut. How was it brought to life? What drives it forward?

We started doing these showcases last year and threw 10 successful shows all over the world. Coming to Beirut at least once a year to do an AEON show was on the bill for a while. The promoter Jade became a friend after playing for him for so long now, and he has always been a very supportive person to me. I spoke with him about the idea during my last show and he was up for it straight away.
So this year looks also pretty promising for AEON release-wise and regarding events. I try to not want too much too fast. But every year, I want to see a little progress. This has been working very well so far.

10. You’ve been in the scene for a while now, and you watched it evolve from within. In short, how would you say its changed and what does the future hold for electronic dance music?

We are at a peak right now. There was this big bubble in 1996/1997 like the one we have now, and the whole “industry” totally crashed in 98. So when I started DJing in 1999, the electronic music scene had just had its first big boom, and then the renaissance came in 2004/05. Right now, it feels like 1996/97. Too much shit is sold as gold and the listener doesn’t really get a chance to find the quality in the jungle of music being released and hyped by media. How could they? They listen to what you present to them. But to be fair, this is the music industry. As soon as major labels jump on a certain genre (Rock in the 80s, Rave in the 90s, HipHop, RnB in the 2000s), it will be pushed to the limit and every cent is squeezed out of it. History is just repeating itself. No harm, no frustration. As soon as major labels and main media became involved, they changed everything. But there will be the time again, when the hype is over and the music starts mattering again and reinvents itself. A style of music is like fashionl; everything will come back in an even better way.