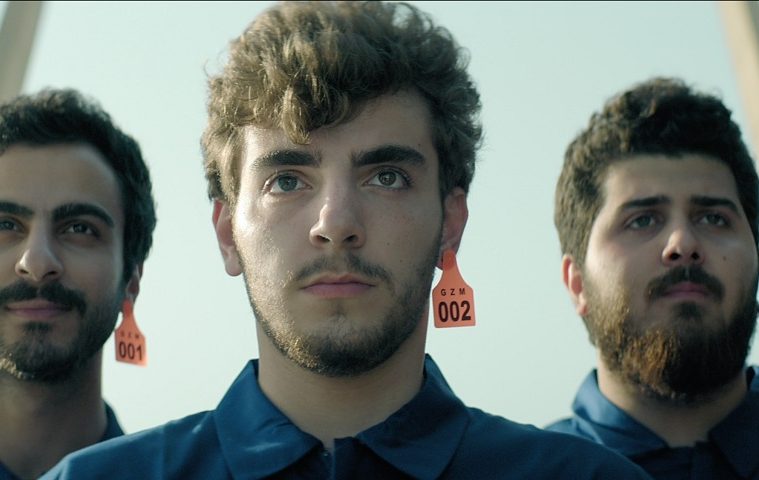 Behind the Blue Overalls: An Interview with GIZZMO

GIZZMO are 3 Lebanese boys making noise bigger than their city itself. Their first EP “System Failure” that was released on Fantome De Nuit record label, sent shockwaves through the local scene as their electrifying signature sound was something never heard before. It rang the bell of a new era of music for the busy city of Beirut, a loud, electric, precise, heavy but funky as f*** era.  They kicked the door of every venue, festival, promoter, brand with a silly smile and a bunch of electronics and a sign that says: “We’re Gizzmo motherfuckers, with 2 Zeds.”

I sat down with them for a chat to know more about their musical endeavours, and I got to learn all about their friend MO and their love for alien populations. Here’s how it went:

You have quite a unique name. We’re curious; why GIZZMO?

Okay so we have this friend called MO, and… No, we’re kidding!

Joy and Camilio are in architecture and Alex is in animation so there’s this thing in the software we use, X Y Z, it’s called a GIZZMO. It’s basically 3 directions that meet. Also, if you don’t know what to call a machine, you call it GIZZMO; we always wanted to feel like it’s one machine playing the music. It’s also mysterious.

I know that each one of you has a different musical background, how did you come together as GIZZMO, the electronic band as it is today?

It’s because of the machines we have and the artists we listen to; they’re mostly into electronic. We did not want to use the synthesizer or the drum machine as a rock instrument. We had rock and electronic instruments on us and we wanted to see where they could take us. We wanted to use them “for who they are and what they are” and have them evolve us. If you have a drum machine, why would you want to use it to produce “dub dub dah, dub dub dub dah…”? A drummer can do that. We wanted to use drum machines to their full potential.

How did the electronic music scene in Lebanon help shape your sound and direction?

It opened our eyes to a scene we were not used to before, which is the techno and electronic scene, and we wanted to integrate that sound into our music. You always have to put a part of yourself, where you grew up and where you’re hanging out into the music you’re making. We’d often go clubbing at The Grand Factory, Reunion, Yukunkun or The Garten where there were a lot of sounds that we would like to adapt in our own way without it being a typical techno, rock or house song. It’s very inspirational when you see people like ETYEN or Liliane Chlela making that kind of music here in Lebanon, with their own touch and unique sound. We learned a lot and we used what we learned. What do you think made it possible for you to make headlines at a considerably young age?

So, we have a friend called MO… We’re kidding!

We don’t think it’s about age; it’s about how mature you are musically, how much you practice, how much effort you put in… and Wasta of course! No really, we have had a lot of good feedback about how tight and mature our sound is. We have really worked hard those past 3 years. We visit every sound we make several times; we know the sound should evolve and change as our skills develop. What we perform live is different from how the tracks are recorded on the album; you could say they’re two different acts. We always look for what’s missing and we fix it based on experience and practice. There’s a lot of evolving in what we listen to, how we perform and what we feel during our performance.

Visuals seem to be a crucial part of your identity; what are your criteria for mixing image and sound in musical production?

As long as the idea and the vibe are transmitted, for now, we’re happy with it. We don’t really think the visuals through as we should, we don’t create a storyboard for the videos (except for Debug); but the album was homemade, and we like the idea of the visuals being homemade as well. That’s what we do; we combine everything we know from our educational and personal backgrounds into producing everything ourselves.

You have released a lot of new content this past month, including the new track that came out the night before your performance at Wickerpark; what do you have in store for us next?

A couple of new singles before the next EP comes out. We can’t say anything serious because, you know, we’re mysterious.

What we can tell you though is that this time, we’re trying the release the video with visuals first, followed by the EP – unlike what we did with the previous EP.

We’ve been working with Wondergaap at Light FM in collaboration with Red Bull. We wrote two new songs about our environment and how fucked up it is and we’re singing in Arabic! They’re going to be out soon so keep an eye out.

What emotions, feelings or reactions do you wish to trigger in your audience?

If you listen to our lyrics, it’s not triggering, it’s more relatable. It’s about what we have been feeling this past year. People reacted to our EP saying that yes, they can relate to what we sing about. It’s like they’re singing along, and they think: “Oh shit, it’s not that happy of a song”. It’s nice, it makes you feel like there are two levels to the music: happiness and sadness. It’s what The Smiths used to do, and we love that. Actually, it’s not sadness; it’s more of confusion, anxiety about the future… even the younger generation and students abroad can relate.

Alex and Joy, you won the BBX competition as Pomme Rouge but you are still very invested in GIZZMO, as the previous question shows; how do you juggle between the two? Are there any similarities between the two projects?

No sleep and hard-work. However, we do not think that the two projects should be compared, even if both are electronic. GIZZMO is made for the live music scene while Pomme Rouge is made for a completely different scene which is the clubbing scene. They’re two completely different projects, personalities, states of mind, and ways of writing and performing. With GIZZMO, you have a song that’s written and played from A to Z and this is how we want it to be. For Pomme Rouge, you have a structure and a bass and you have to keep up with the audience’s state of mind on the day of the performance based on your interaction with them. They’re both beautiful in their own way and this is why I wouldn’t compare them. It’s like asking a child if they love their mom or their dad more.

If you could choose 1 artist, dead or alive, to collaborate with on your next release, who would it be and why?

Melhem Barakat, definitely. Why? Cause “hawawawa! Hawawawaaa! Hawawaaa!” This guy knows how to work a crowd. He combines the GIZZMO and Pomme Rouge vibes. Imagine someone with his skills making an electronic track based on Hawawawa and Amaren. He’d get the whole crowd singing along and dancing.

Maybe if they listen to our music, there are some frequencies they would understand cause like, you know, music is a universal language and shit.

If there’s an alien population, we’d like to think they’re going through the same things.

Our target is to express alien – not only human – feelings.