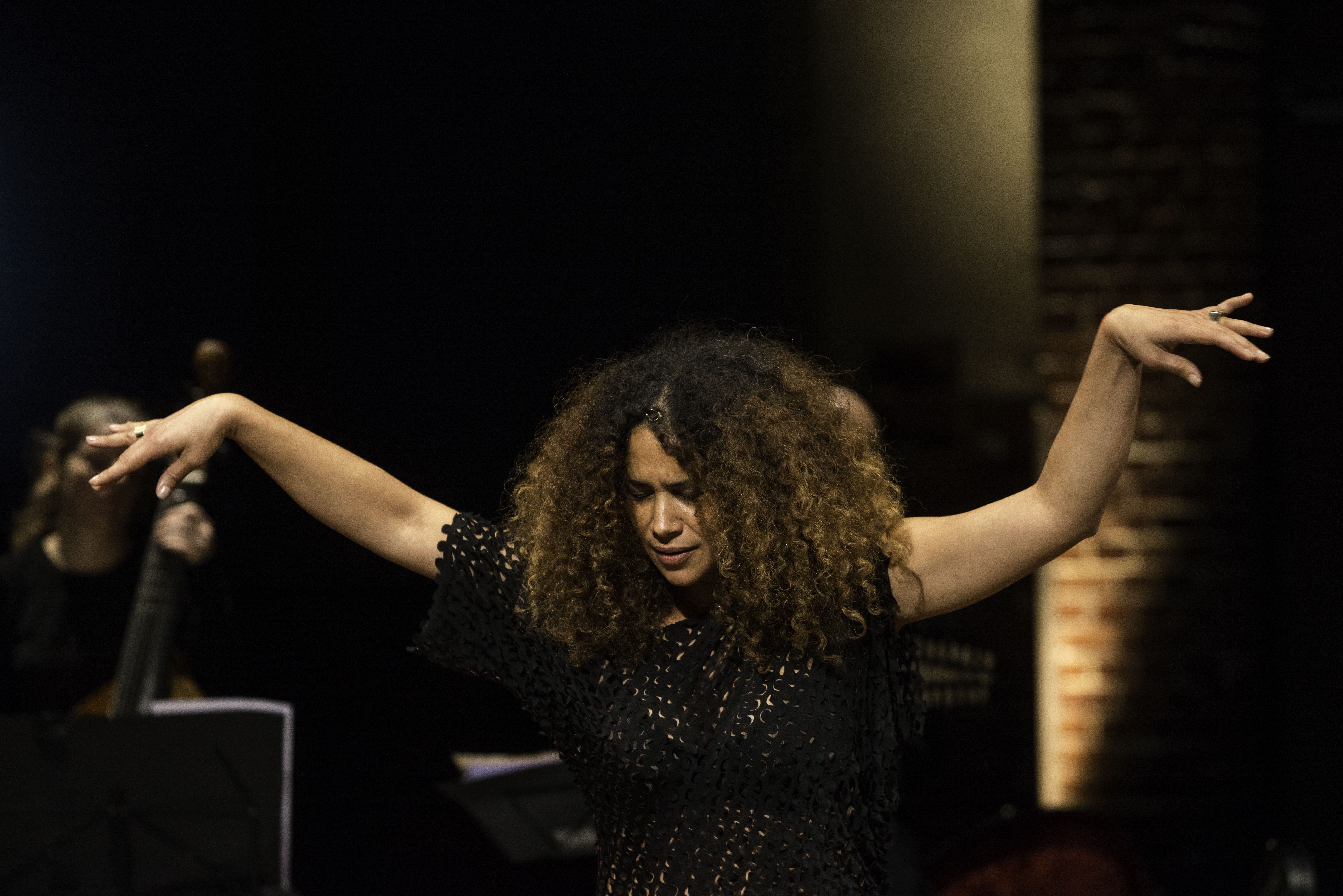 
Carrying all her experiences in her voice, from her childhood in a conservative bourgeois family in Tunisia to the cultural clash upon moving to study in Belgium, Ghalia Benali is an artist from the Arab world that has the ability to communicate Arab music without catering to any taste but hers. Just when we thought her music was the most compelling thing about her, we conducted an interview with her and discovered that how she goes about working on the music and the lyrics is even more compelling.

You have such stamina and character in your voice, tell us how you go about composing music to go with it.

I started music by pure accident. I never thought I would end up performing 25 years now after having started when world music began gaining success and more people were curious about our culture and music. As for composing the music, my number one interest is to feel the words. It all starts with the lyrics. The words have their own color, weight and rhythm and their own music. My work is trying to find that music and that rhythm. Of course someone can compose something for me and I can fit into it but that’s just it; I’d be fitting into something not coming up with something completely original. Eventually the voice is that of the soul and the heart. Only when we are true to ourselves that this voice can emerge.

We learned that one of the very first times you ever performed was by chance and it was with Lebanese. What do you recall about this incident and how has it changed you?

That was in ’93 when my friend was celebrating the 13th year anniversary of his beautiful place. He wanted to include four music genres: Arabic, Flamenco, Jazz and classical Western music. He asked me to perform but I didn’t know anybody there so he looked around and found a Lebanese Oud player who had musicians and he invited him. I only met the lead oud player, Marwan Zoueini, before the celebration. I met the rest of the musicians on stage. The work with Zoueini wasn’t something that would last for a long time. Still, I performed with him for 6 concerts in Portugal. That tour showed me how interesting it is to perform and connect with an audience who doesn’t get the language I am singing. I didn’t even plan on making singing a career, I was studying graphic design.

How do you feel about the attempts to marry Arabic music with electronic? Would you consider doing that?

I considered doing that in 1999. Arabic is very rich and easy to perform and improvise in. That is why I mix it with Jazz and classical music (which is the most difficult). Electronic is very easy and I have a problem with performing it in that it is not live. It doesn’t move my soul on stage. When I’m singing my soul is dancing and I can surprise myself. This is not quite the case, for me, when it comes to electronic music. I miss real musicians. When we use a computer or electronic music we need to know why we’re using it and in which context. I’m working on a project called One Hour Before The God’s Awake which uses electronics but this is mainly poetry.

You have covered multiple tarab classics. How do you choose the songs you want to cover and how do you work on making these covers your own?

I only sing classics that I know and that I listened to when I was young. My first school in music was Al Quran followed by Oum Kolthoum, Sabah Fakhri, Wadih El Safi and so on. These people were my real school. For example, when I decided to sing Ya Msafer Wahdak, I was at a festival and had to perform with a oud player for 30 minutes. The player knew the song and I did not want to rehearse before that. I just wanted to sing it the way I remember it. When you forget everything there is always something that remains and this is what hits your soul and heart and memory. I wanted to get to the essence of the song. I cover these classics with less musicians and I try to find how the classic could’ve been before being written for a big orchestra. I prefer keeping it very simple. I also need to love the song and be aware of it for a very long time.

You’ve often mentioned the importance and the magic of the Arabic language. Tell us more about your relationship with languages in general.

I love singing in Arabic because it is very poetic especially that we stopped using the language that way every day. It’s poetic and reminiscent of fairytales and something that is far somehow. I can’t feel myself singing in any other language. Sometimes I don’t even understand the meaning of the words in my mind but I understand them with my feelings. Alchemy was invented by Arabs. The lyrics are spells to me. I ask my western audience to feel the magic without having to understand the words. The magic of the words is translated upon my face and in my body movement. Every language has a new sound for me. I love languages and I like accents and trying to understand the meaning of words from how they sound. Languages tell me a lot about humans; about me!

Traces of different Arabic music genres are present in your music. Why is that so?

Not only traces, it is Arabic music. I call it contemporary Arabic music. Even if I am originally Amazigh, and I think of myself as a citizen of the world, my soul is amazingly oriental. The music is mainly Arabic but also Asian and Indian. Arabic music is really present and I love it. I feel a big connection with it even if I am more fluent at other languages. I feel Arab more than anything else. Not Arab as in the mentality of the Arabs today because I knew that mentality very well as I grew up in Tunisia. However, moving to Belgium later on helped me fight off this mentality and preserve what I love about Arabic and the culture.


You were born in Belgium, raised in Tunisia and then you moved back to Belgium. How has the drastic cultural changes impacted you as a person and your music as an artist?

In Tunisia, I was raised in a Bourgeois family and only sang at home. Performing and living off music was not an option. I moved to Belgium to study and wanted to be the ideal Tunisian. Bearing in mind that I am supposed to get back, get married and have kids and never consider my passions, I suddenly decided to experience plenty of things. I was young and full of life and curious about everything. When you give in to this, you cannot hold back. All this personality and stamina appeared in the music which came to be by accident. I can say that music was my fate. I knew nothing about it but I was singing. I was confused as to how can I perform or compose and I didn’t study music. Nonetheless, music became a way to find myself. I had to be honest to myself and observe how I act and interact with people. What I learned is to try with a lot of love to connect with the audience. It might be ironic but the slogan of my last album “MwSOUL” is don’t listen to me listen to yourself.

You work and perform mainly in Europe and you’re probably considered (even exoticized) as the sound of the whole Arab region by Western media. How do you feel about the fact that since you come from an Arab country you are asked to represent a whole nation?

As I said I arrived with the beginning of world music and I was this Arab girl singing and telling more stories about our countries without trying to change anything about our music or to make it more western. When I started gaining recognition in Europe, media said I am the ambassador of Arabic culture. I was not representing the culture but I was telling more details about it making it a fairytale. This is the phantasm of the West about us; they see us like a thousand and one nights. The Arabs are about sensuality, beauty and fairytales, however this image has become more sad today. This might be dangerous, but our culture is the closest to what is supposed to be rough sensuality. I was representing that Arab phantasm that the westerners couldn’t have. After the Arab Spring, I had to rediscover the culture because I felt I was telling old stories of Arabia to the Westerns. I’d love to see how we could get out of these doors we built ourselves because of traditions and fears. I feel I’m supposed to be an ambassador of the Arab world even for the Arabs. I feel like I need to bring closer what I learned here (Belgium) to my culture.

Speaking of your career in Europe, lyrics are such an important part of the music. How do you work on delivering those lyrics to people who do not understand the language?

I touched upon this answer in previous questions but one more detail. The lyrics are more important to me than to the audience. I tried singing words with no meaning but it didn’t work for me because they didn’t mean anything and I couldn’t feel them. In turn, the audience couldn’t identify. Lyrics are important and I need to know the words and how to pronounce them. I need to communicate my passion for the words with the audience. I am Arab it’s in my roots. I love the language and it’s the one I could feel the most. I couldn’t deliver the same feeling while singing in French or English.

What artists, not necessarily Arab, inspire you?

Currently I find my inspiration in all that is Western classical like Mozart, Bach and so on. I am also inspired by the Spanish music. I’m trying to stay away from the Arabic music searching for something, I don’t know what yet. I don’t feel connected to Arab singers and musicians today. There are exquisite talents but I can’t find this sacred talent that I can feel for. I love the Indian classical music as well. There are producers that I like a lot, if I were to name a few from your part from Lebanon, I would say Zeid Hamdan. I also admire Khyam Allami, Kamilya Jubran… Mashrou Leila are really interesting I don’t feel close to them but the work they’re doing is great.

For more on Ghalia visit: http://ghaliabenali.com/