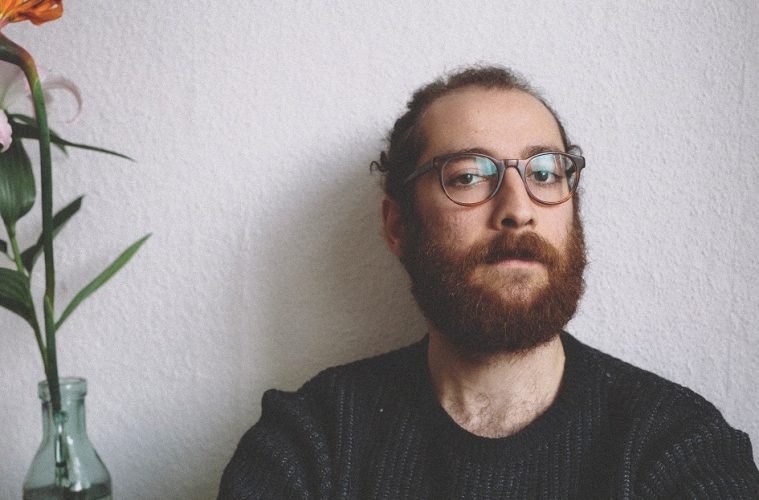 On Friday the 13th of December, electronic-folk artist Yousef Kekhia released his debut album “Monologue”. This intimate, personal yet universal journey started a couple of years ago through Syria, Turkey and Germany. This release marks a new phase for the artist, creating a platform for telling history.

Yousef Kekhia is a person with a voice and a guitar, both very important in his music. He is often alone on the stage and shares his story with his audience. “I think I will never have such a private story to tell like “Monologue“ in the future.” The album has experienced many different developments, and for the time being the crowd-funding campaign has been the latest stage of its production process.

When Yousef Kekhia arrived in Germany he wasn’t known in the music scene. To start a crowd-funding campaign could be therefore a tricky thing, But the support of his family and his fans, known and unknown, was tremendous. “It’s just a beautiful thing and I have been very lucky to be able to do this. It pushed me really from the beginning. I wish music were more supported but most of the time this is not the case.” The crowd-funding campaign brought more than 10,000 Dollars, and this method is becoming more and more popular in the music scene. Mashrou‘ Leila funded their third album Rassuk this way. Popular bands with a huge fan-base such as 47Soul and El-Morabba3 manage faster of course to mobilize their fans to support them.

Musicians like Yousef Kekhia, who are still at the beginning of their career are having more difficulties to find support, but Kekhia had the right support and luck for his campaign and could realize his dream and continue his healing-process through his music. By this campaign he was enabled to produce music as he saw fit, and he got time to work on it properly. This method is a possibility to stay independent and to create the music for example Kekhia has imagined without being restricted.

The debut-album „Monologue“ consists of nine songs. Four songs were previously released as a single. “Hal ard Lamin?“ (Who Owns The Earth?) was the first single to be released, and introduced the listener to the sound-scape of Yousef Kekhia’s world.

He wrote this song in 2014, when he was still in Turkey, finishing his studies. The narrative of the song is based on the questions of borders, refugees, and exile, but it’s only a tiny part of Kekhia’s narrative storyline in the album. In this song he asks an unspecified partner who owns this earth? by answering himself that it belongs to all of us, no matter where we are from. He explains that: „These songs are about nostalgic emotions or similar things and feelings. You can feel this in the whole album and the anxiety I outlived ant the times I have experienced. It’s very dark and personal but very important for me to share with others.”Working on the album was a long journey for Yousef Kekhia, not only mentally but physically as well because it is a very autobiographical story that Yousef Kekhia tells.

The music changed drastically and developed with every new turning-point in his life. How would someone describe his music? You can hear some influence of Damien Rice and Sufjan Stevens, two musicians he admires a lot, but his music is still very different and you can hear Yousef Kekhia’s melancholic style. You can hear inspirations from composer Nils Frahm as well which mentions Kekhia as one of his favorite musicians. While his home country Syria is still recognizable in his album, Berlin has a big influence on him too.

The sound of “Monologue” is very acoustic, yet with electronic elements, influenced by different artists from different eras. Originally from Aleppo, Yousef Kekhia started early to be engaged with music intensively. Kekhia’s sound has changed a lot during his journey from Aleppo to Turkey, and finally being in Germany, not knowing what the future will bring. At first, it was a lot of Guitar sounds, and a popular catchy tone reminding you of Bob Dylan, Elliot Smith and all the others that came after them. Now, his little studio in the heart of Wedding in Berlin is packed not only with the Guitar and the piano, but with a set of synthesizers and electronic equipment as well. He went to a few concerts that inspired him to change his musical style, and being immersed in the electronic scene helped him to learn a lot of things from the production perspective of making music. Kekhia remembers that some songs were first written for the guitar, but now for the most he doesn’t have this instrument in his music at all.

In “Monologue” he talks about his dreams, hopes, expectations, reflects on his past, looks to his future, and thinks about different sensitive issues that are dear to his heart. The songs are very intimate, yet are able to be applicable to a universal look on the world. He explains that: “It is very important to address these kind of stories and to share them with others. It is a very psychological process and a way to cure me. This album is very important for me, it is very surreal and abstract. I am interested to see how people will react to this album.“

His song, Bshi Yom for example is about the days in Syria before the war and what home means individually for Kekhia. On his Youtube Channel he writes that: “Bshi Yom is a song about reminiscence. It’s a sad song, but it keeps reminding me how things were before all fell apart in Syria. It is very important to my healing. It’s also a song where music fights back harsh circumstances, it’s a state where I decided to carry my guitar and sing no matter what the situation or the mental state is. It keeps getting dark, but it doesn’t matter, it’s just beautiful (themusic).“

Yousef Kekhia always explains in his soundcloud profile what his songs mean to him, and what issues they address. His music has changed a lot during his stay in three different countries. He explains that: „The music has changed a lot. I usually write the songs on the guitar but now they sound very different from the time they were written. Even if they sound folky, and acoustic, they have changed a lot. And this process has continued in Germany.” His album in a whole is very melancholic, and looks at the past with a critical view, but at the same time it looks hopefully into the future, and tries to present a positive outlook. His music is much more concerned about emotion, and letting out this emotion. “Monologue” is a new step for Yousef Kekhia to evolve and develop his musical journey to become a serious singer-songwriter, writing Arabic music in Germany. It is only the beginning for Yousef Kekhia, and he will continue to pursue his music career in Berlin.