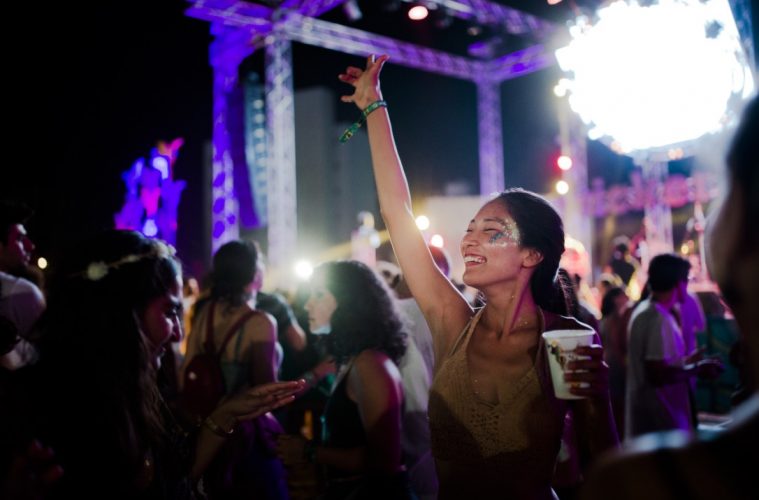 A self described grassroots alternative festival, Wickerpark Festival – which has been taking place every summer since 2011 – has managed to become a milestone in the independent festival experience in Lebanon. For more on the founders and their mission, check out their Revolver interview from last year.

Hosting a melange of local and international artists, the festival has so far  accommodated more than 18,000 attendees, 80 bands, and 100 artists and performers – in addition to a number of NGOs, activists, promoters, and independent ventures, all of which the organizers say committed to their vision.

We will make things easy for you. This is all you need to know about Wickerpark Festival:

Lineup (find all artists bios below):

How to get tickets?

Offline: At the festival directly or

Bios below the gallery

Mazen el Sayed aka El Rass wrote his first poems at age 11 and his first songs at age 15. He discovered French hip-hop while studying in France, when one of his teachers gave him a cassette. The politically charged nature of French rap appealed to him, as did the fact that
many French MCs were of Arab origin and used familiar Arabic terms. After “almost two years in the hell of banking,” he returned in 2008 to Lebanon, determined to dedicate himself to music and journalism. His debut album “Kachf el Mahjoub/Unveiling the Hidden” (the title is from a Sufi masterwork penned some 900 years ago) was recorded in 2012 with electronic producer Jawad Nawfal (aka Munma) and met with great success. El Rass’ signature style is an animated fusion of classical Arabic — an idiom seldom employed in rap — and contemporary wordplay gleaned from the Lebanese streets and elsewhere. From his viewpoint, there is a kind of continuum of language and purpose from early Koranic verse to today’s Arabic-language MCs. An emphatic on-stage performer, very much the angry poet, El Rass draws material from the ancient and the modern, the spiritual and the worldly. One of his favorite singers is Abida Parveen, a Pakistani singer well-known for her interpretations of Sufi poetry. He is an equal opportunity critic, lashing out at the Muslim Brotherhood, radical Islamists, Iran, Turkey, Gulf “tyrants,” the United States and various Lebanese figures and mores, among other targets. Playing the part of disgruntled contrarian seems to suit him.

What started out as a project to discover frequencies and their possibilities, developed into a full-time musical venture. An electronic/ funk/alternative band (for lack of an all-encompassing description), Gizzmo aims to combine the power of synthesis and raw sound, into a new original composition. The group experiments with different schemes and themes to uncover new musical and artistic grounds that appeal equally to feet and brains. Gizzmo was originally formed by Joy Moughanni on guitar and vocals, Camilio Khoury on bass, and Sergio on drums, experimenting with different genres of music and soundscapes, combining electronic and organic sounds. Alex Chahine joined the project in its early development, adding another layer to the electronic feel and upbeat jazz touches. The band’s first performance took place at “Fete de la Musique 2016” at Grand Factory, where they played their 1st original, “Debug.” This led to their admittance to Beirut Open Stage’s Wave Three music competition, which they won and were thus allowed to record 1st single “Naked Sheep” with Fadi Tabbal at Tunefork Studios. Gizzmo released its debut EP “System Failure” in November 2017, on digital electronic
label Fantome de Nuit Records.

Interbellum is the musical project of Lebanese singer-songwriter Karl Mattar, formerly known as Charlie Rayne. Formed in 2015, the project sees him working alongside multi-instrumentalist and producer Fadi Tabbal and other musicians from the Beirut music scene. The band’s sophomore album is slated for release on Lebanese indie label Ruptured in the fall of 2018. While the band’s debut (“Now Try Coughing,” 2016) featured lo-fi guitar-driven songs recorded live to cassette, the upcoming follow-up took shape in Tabbal’s Tunefork Studios and expands the band’s palette considerably, adding synthesizers, samples and electronics. Single “Another Day / First Light” was released in February 2018 and hints at the band’s new direction. For Wickerpark ‘18, Interbellum will perform with a new line-up featuring Julia Sabra and Pascal Semerdjian from Postcards, and Camille Cabbabé from KŌZŌ.

Kid Fourteen is the solo moniker of Khodor Ellaik, a rock musician currently based in Beirut. Between 2010 and 2014, Ellaik was the front-man of punk band Beirut Scum Society and the shortlived post-punk/no-wave outfit Friendly Faces. Following these ill-fated experiences, Ellaik adopted a solo aesthetic that added a small assortment of synthesizers and drum machines to his electric guitar and over-the-top vocals, in order to shape what became Kid Fourteen’s trademark sound, an impressive blend of punk sensibilities and noise-pop elements. His debut album “Dream Kids Never Sleep” was released in 2016 by Lebanese indie label Ruptured. Kid Fourteen’s second album “Blood-Thick Silence” was released in April 2018 by UK-based imprint Pinyon.

Postcards is a dream pop trio formed in 2012 in Beirut, Lebanon. Their music is defined by hushed vocals floating over expansive sonic spaces that shift between harsh noise and ambient soundscapes; a duality that embodies the promise and disillusion that runs through their hometown and their country’s history. In 2018, the band released its first full-length album “I’ll Be Here In The Morning,” which saw them working with long-time producer Fadi Tabbal of Tunefork Studios. The album’s lyrics reveal a young woman caught between hope and despair, and the music complements that dichotomy with instrumentation that nods to dream pop, noise rock, shoegaze and jangle pop. The album came after 3 well-received EPs: “Lakehouse” (2013), “What Lies So Still” (2015) and “Here Before” (2017). Initially formed as a quartet with their friend Rany Bechara, Postcards now operates as a trio. The band has been regularly touring Europe, the UK and the Middle East since 2014, and has opened for bands like Beirut
(2014) and Angus and Julia Stone (2015) in Lebanon.

‘Tanjaret Daghet’ is derived from the Arabic term for a pressure pot, which in essence expresses the sentiment of the youth of the world at this very moment. In a time of turmoil and upheaval, Tanjaret Daghet manages to preserve what really matters at the forefront of their lives, namely making music that transcends worldly struggles and tragedy, and in turn uplifts the spirit. The musicians’ honest and powerful delivery truly represents the voices of today’s youth, whether in the Arab world or globally. They are fueled by great passion, coupled with authenticity and an unshakable sense of conviction. Tanjaret Daghet came to life in 2008, as the brainchild of lead singer and bass player Khaled Omran. The band underwent several transformations, and nowadays consists of Khaled Omran, joined by Tarek Khoulouki on guitar and backing vocals, and Dany Shukri on drums. Their music is an expression of everything they have experienced
and has been stored in their psyche. “For me, music is the simplest way to translate my thoughts. It doesn’t matter what language you speak. Music transcends,” says Omran. U.S. magazine Rolling Stone adds, “Syrian trio Tanjaret Daghet look increasingly like becoming one of the few bands to nail the tricky business of making Arabic language rock appeal to people who don’t really listen to anything except Western music.”

‘The Sudanese Band’ are a group of Sudanese guys who work in Lebanon, they have a particular love for traditional Sudanese music. They decided to form a band, their only support was their
friendship and their love to their country’s music.