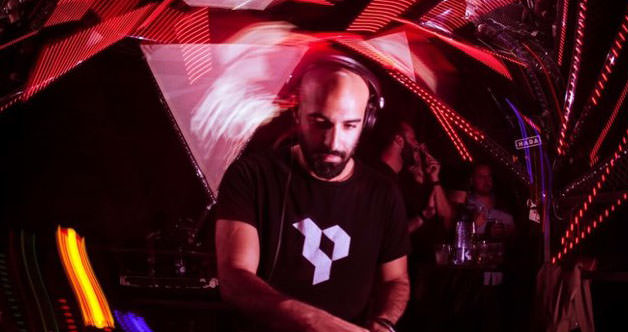 Before we start arguing on the title, let me begin by telling you that Raxon has studied architecture for 5 years in Dubai, then worked there for 3 years. For him, music and architecture are a lot alike, it’s the same thinking process.

Born in Abu Dhabi, Raxon started mixing while still at high school. In one of his early interviews with TimeOut Dubai back in 2014 he said: “The music was always there, whenever someone was throwing a house party, I was the guy getting the tunes. It was just a crazy hobby which built into a serious hobby.”

The Egyptian, now based in Barcelona, has fast become known as one of the Middle East’s most respected electronic artists. Things started to immense after he became resident DJ for Audio Tonic in 2007. It was there and then he started to get exposure to a variation of sound influenced by quality music. In 2010 DJ Mag Middle East placed him number 7 in their Top 100DJ poll and he was voted Best Dubai DJ in 2013 and 2014.

In an interview with Electronic Groove, Raxon talks about how he was growing bigger as days went by, but it wasn’t till Hernan Cattaneo pushed him to go further in his career and move out from Dubai. It was during Ahmed’s birthday when Cattaneo went up to him and said: “Man you want to take your career to your next level? Then you have to be in Europe.” In the same interview Raxon said: “Hernan Cattaneo really supported me. He’s been a real inspiration because of his attitude towards the business and his fans.”

You need to set the trends with your music, not follow them.- Ahmed Raxon

His cultivation and passion for this music drove him to produce his signature sound of driving bass heavy House & Techno, which was inspired by his 2012 accolade winning the Beatport remix competition for Nick Curly’s ‘Underground’ on Cecille. Since then, he released and worked with some of the industry’s most respected imprints including Ellum, Diynamic, Noir Music, Tronic and more, but he is mostly know for is 2016 summer remix of Noir & Olivier Giacamotto’s ‘Reste’

When Carl Cox played my track, it made me realize I am on the right path.- Ahmed Raxon

His success in the studio has brought him to the attention of a global audience, with past (and current) gigs for the likes of Watergate Berlin, Pacha Ibiza – 2016 summer residency at mosaic by maceo, Off Sonar, ADE, BPM Festival and DGTL Festival Amsterdam and Barcelona. Extenuating his global appeal, Raxon has also appeared 3 times as a special guest on John Digweed’s Transitions radio show.

And according to the Garten’s lineup for this summer, we are expecting to see Raxon behind the decks.

Also, wait till late this summer as he has huge news and a first in his career.