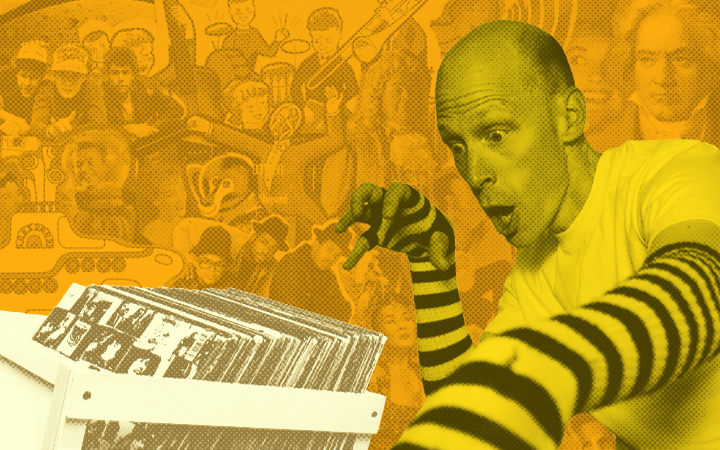 Not too long ago, a bunch of obscure instrumental hip hop beats from the 2000s found their way into my ears. They were labeled “Sampladelic”.

The music was a kooky collage of genres, all held together by the glue of hip hop and electronic music. Funk, jazz, bluegrass, exotica, these loop-based beats cover a broad spectrum of styles. Add to that the odd samples of things like giggling children and clucking chickens.

But who exactly was behind Sampladelic? The short answer: the former frontman of a 90s post-grunge band and current children’s musician who bought his first computer at the request of Sir Mix-a-Lot. The long answer: keep on reading…

Chris Ballew might not have a lot of street cred in the worlds of hip hop or electronic music, but he’s had a pretty successful musical career as the bass player and lead singer of Seattle rock trio The Presidents of the United States of America (trust me, you’ve heard them), and he continues to find success today as children’s musician Caspar Babypants.

But between these two sections of his musical career, there was a more enigmatic middle phase, which was somewhat of a departure for him. He traded in his guitar for a computer, and began dabbling with digital beatmaking and experimental sound collage; and he was actually pretty good at it. Although, to say that this is where his curiosity began is slightly inaccurate.

Ballew’s youth was characterized by diverse musical influences. His parents introduced him to traditional American folk music and classical music, and he was a huge fan of The Beatles. In addition to the fab four, he also grew to love hip hop after listening to Run DMC’s 1986 album “Raising Hell”, and seeing the Beastie Boys live.

He was also a prolific musical explorer, documenting his experiments with homemade tape recordings. “I had started to take strings off of guitars, detune them, double strings, and experiment with weird pickups, and distortion, and jam with odd percussion people and cello players. I guess it was this kinda like trancy almost Middle Eastern but real broke down, like if Daniel Johnston and Sebadoh tried to make music from Turkey,” Ballew recalls.

It’s no surprise then that he would eventually cross paths with fellow genre-bending weirdo Beck in the mid-90s, joining him in the studio and on the Mellow Gold tour, where he played bass and guitar, but also ran the sampler onstage. “That was my first exposure really to that kind of stuff being integrated into songs and live performance.”

(That’s him in the cowboy hat)

Fast forward to the late 90s: The Presidents had soared to international fame and temporarily broken up. Meanwhile, Ballew started dipping his toes into the world of music licensing, offering up some solo recordings he had laying around. Prior to their disbandment, The Presidents were collaborating with rapper Sir Mix-a-Lot, a fellow Seattle native. It was there, while observing Sir Mix-a-Lot work on Pro Tools, that Ballew was coaxed into going digital and buying a computer, which he did in 2001.

“It was kinda like uncorking a bottle that had been corked for a long time. I always had this idea that I wanted to make music that was really surreal and groovy and scary and kinda challenging maybe a little bit, so this was my opportunity”. And so, Ballew set out to build a library of new music for licensing, while at the same time, exploring a sound he was never able to incorporate into his past projects.

For this new sound, Ballew drew inspiration from quite a few artists, including Fatboy Slim, DJ Shadow, Tipsy, Chriss Joss, and Cuordoroy, among others. He also professed a deep admiration for turntablist Mr. Dibbs, for his fearless but funky sound collages, and Squarepusher, whose elastic live sampling technique fascinated him.

Something borrowed, something new

Sampling was a key element in this new sound. Whether in the context of hip hop or folk music, Ballew considers the freedom to share and reinterpret music essential to the development of culture. “I think if money weren’t involved, music would be passed around like that all the time […] that’s a natural way for songs to move through society and people”.

Some of the samples he used were cut from obscure old records, while others were cut from his collection of handheld tape recordings, wherein he would go into music stores and toy stores, and try out their synthesizers and toys; yes, literal toys. He also described a process in which he would drop the tone arm of a record player onto random spots of a record to the rhythm of a beat, creating these weird manually chopped up sounds.

When it came time to compose, he would usually begin with a looped sample and build everything else around it, a trick he picked up from Public Enemy, who would famously incorporate dissonant atonal samples into their beats. “That was my favorite way to work, was just to start abstract, and then coax music out of the noise,” he explains.

Realizing this music was probably too out there for licensing, Ballew decided to release some of it as albums, putting out “My First Computer” in 2004 and “Like to Boogie” in 2005. Those did not attract much attention either, which lead him to try composing more conventional material that would be more appealing for commercial use.

By 2007, he had started losing interest in this software-driven computer-based style, and began exploring a more simple acoustic sound, which would later evolve into Caspar Babypants. In 2014, after accumulating a 1000 piece music library, he quit the licensing game altogether, and it’s been Caspar all the way from there.

Ballew recently uploaded 6 albums worth of Sampladelic music to his website for free download, giving this nearly decade-long project some due closure. Hearing about the rejection and failure endured while working on this material all those years ago can make you feel like discovering it and praising it today is just too little too late. But knowing Ballew, I’m sure as long as his work brings joy to someone out there, he couldn’t be more glad.

Check out Chris Ballew’s website for more Sampladelic music and other old goodies.