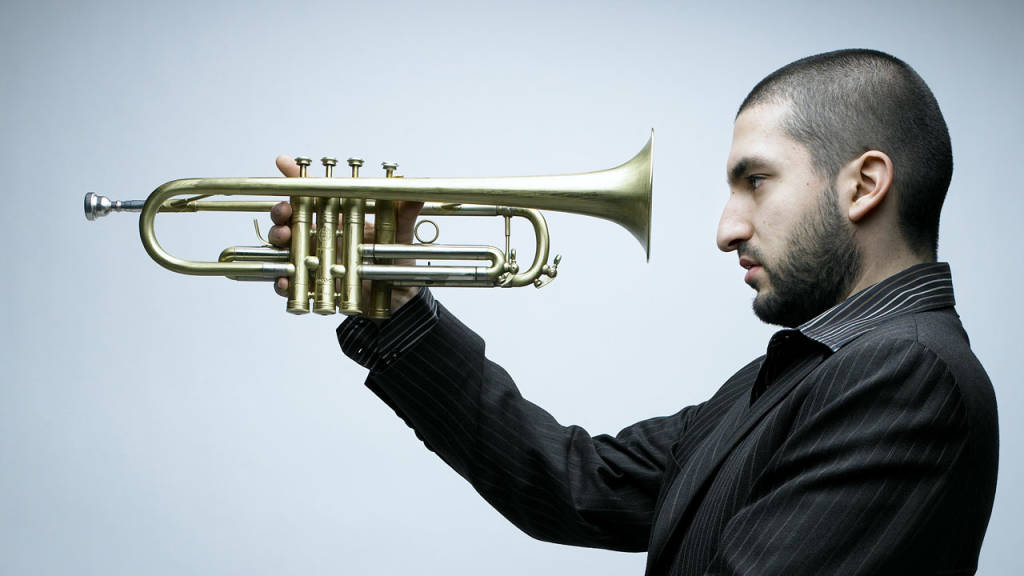 Interview With Ibrahim Maalouf: From Behind the Trumpet

Growing up in a family of prominent Lebanese artists, Ibrahim Maalouf combined his heritage with his talent and vision to mold some of the greatest pieces of music ever to stem from a local talent. But we can’t really call Mr. Maalouf a local talent, can we? With a whole host of international awards under his belt, the most recent being ‘Best World Music Album’ win at the Victoires de la Musique Festival, Ibrahim Maalouf has become an internationally respected musician. The Revolver Team had the honor of interviewing Ibrahim Maalouf and get a chance to see things from behind the trumpet. This man has a conscience as deep as his music.

By Rani Nasr and Bernard Batrouni

You grew up to musician parents and picked up the trumpet because of your dad who you even toured with for a while. What important lessons were you able to learn from him in music and in life?

Actually, my father gave me everything, I learned everything from him. Playing trumpet, of course, in both classical and arabic ways. But he also encouraged me to compose a lot when I was young. He was always impressed by the way I composed music effortlessly at a very early age, and he used to tell me everyday that I have to continue to do this and never stop (which I did). Also, my father was very strict with me. He raised me like they used to at the beginning of the 20th century… but that made me stronger. So I’m fine with this.

Despite the bombings and violence that is happening in Beirut today, your triumph in the Victoires de la Musique Festival gave Beirut hope that it can still produce and inspire beautiful and acclaimed art. What was your personal reflection on the award?

I was really honored by the award. It’s the first time in 29 years of French history that it has been given to an instrumentalist! This is a great source of pride for me. I truly believe that the west is increasingly incorporating Arabic influences into their own ways of life and visions for the future. And “metissage” is definitely the best option. My music is all about that. So it’s very cool to see that western professionals are ready for this fusion as well as the Arab too.

Beirut 1993 inspired you to write a masterpiece, showcasing its melancholy, sophistication and violence. Does Beirut 2014 haunt your art in the same way?

Oh Yes… more than ever. But I refuse to see Beirut as only a violent, melancholic and sophisticated city. For me Beirut is the place that can still make me dream. Lebanon in general actually makes me feel that there still is a place on earth where I really feel home. Whatever violence or anything that makes people sad, it is first of all: MY HOME.

Diagnostics was inspired by the different things you love in life. What inspired you to write “Illusions”?

“Illusions” is an album that evokes all the things we’ve been told, the things we see, we believe are true, and that might actually be all bullshit. On the other hand, it evokes all the things we believe are wrong, or we can’t see, and that might be reality. To work on it, I spent a lot of time with Yann Frisch, a World Champion of Magic. He made me change my mind a lot on the subject of reality and fiction. It’s a great pleasure to spend time with people like him.

When you were composing and recording “Diasporas”, “Diachronism”, “Diagnostic” and “Wind” you experimented in music and developed your style further. What did you bring to the table from your past experiences in writing “Illusions”?

Well, I have no idea. You know I don’t think I have enough experience to find the words to answer these questions. I spend my days composing music, so I can’t even try to analyze all this. It’s like a huge huge therapy for me to try to explain how I live! Of course, the more I compose the more my compositions inspire the following composition. I know there’s a trick somewhere. I have never really understood how all this…

Your music is never predictable bringing different elements of different parts of the world into a smooth flow of enchanting music. What elements are you yet to explore and what do you have your eyes on for future endeavors?

There are so many things to explore. Again, I can’t say there’s something I’ve never done at all. But let’s say I’m very excited about working more in the hiphop and electronic area. But, I am very frustrated because I compose a lot of songs, and a Lebanese singer has never asked me to compose for him/her! This is a big frustration!

Who are some of the contemporary artists that you admire and would like to one day collaborate with?

I don’t really think this way. My dreams make me think of hiphop, pop, cinéma, dance, Lebanon and magic…

Revolver is a list-based website, and its main mission is to help people explore music and artists. Could you give us a short list for one of the below :
– Top 5 Led Zeppelin Songs
– Last 5 Albums You Fell In Love With
– Top 5 Albums You Grew Up Listening To

Unfortunately, I can’t answer this question… I know it’s strange. But I can’t. I don’t know why, but I have never been able to select lists. It’s probably the most difficult thing for me. But what i can tell you is that: Feiruz, Oum Kalthoum, Souad Mohammad, Abdel Wahab, Miles Davis, Michael Jackson, Gustav Mahler, Frederic Chopin, Robert Schumann, Stevie Wonder, Bach, Lhasa De Sela, Björk, Don Ellis, Led Zeppelin, etc… are names that come to my mind… My biggest musical influence is Nassim Maalouf. My father.

In your concerts, you can sense the dynamics of interaction between the band members. How big of a role does improvisation play in your composing and studio recording?

It depends on the music. In “Illusions” specifically, improv is important during the concert, but only on the specific parts I give to my musicians. Most of the rest is for my musicians to play what I wrote. I improvise a lot in my shows because i give myself the most free part of my music. But there are pieces where improvisation is 99 percent of the music my band plays. This interaction comes from the musicians who enjoy playing together. And “playing” here, is the right word.

Everyone in Lebanon is proud of you and it’s always a big deal when you perform here. Any plans to include Lebanon in your 2014 tour?

Yes we are supposed to play in a Big festival this summer!! I prefer the Festival to announce it though!