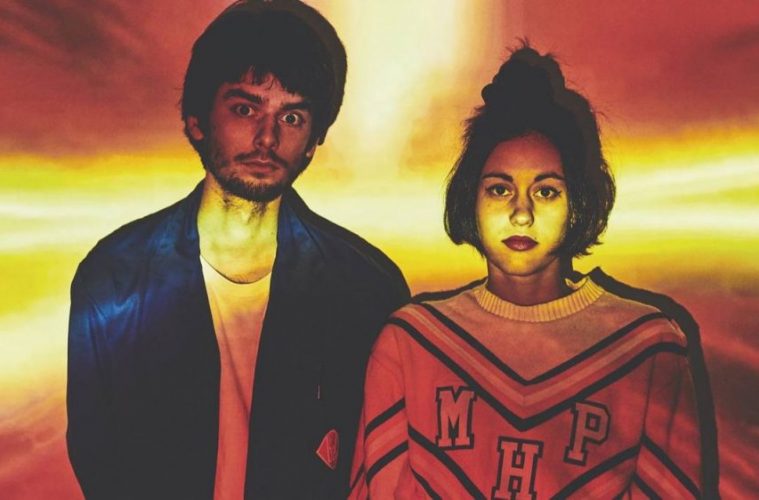 With the end of 2018, it’s safe to say that the year was full of great releases. Yet throughout the year, the music world witnessed a prominent resurgence of synth-driven music, taking many different forms. ’80s nostalgia took over many of the releases, with bands such as MGMT driving heavy influence from the era’s synthpop tunes in their album “Little Dark Age”, while global powerhouses like Muse released “Simulation Theory”, an obvious nod to ’80s retro-rock and vintage movie soundtracks.

On the other end of the spectrum lie releases such as Sophie’s “Oil of Every Pearl’s Un-Insides”, taking a much more experimental, forward-thinking, and even musically prophetic approach to glitch-driven synth music and electro-pop genres.

However, one less discussed release is the French duo Agar Agar’s debut album, “The Dog and the Future”, which offers a refreshing balance between both ends of this spectrum, often giving synth-pop a slightly more contemporary feel with the catchy kind of vocals you would find on many of today’s pop releases, while not abandoning the kind of experimentation that sets them apart from hundreds of bands attempting to reach a global audience through similar music. It is this very balance that managed to quickly turn heads towards the band, offering the casual listener tunes they can very easily bop their heads to, while still providing more seasoned listeners with the edge they may be looking for in newer music.

This comes as a direct result of the members’ completely different musical backgrounds, with the instrumentation being heavy influenced by member Armand Bultheel’s analogue and techno background, while the band’s dismissive, care-free attitude leaks straight from vocalist Clara Cappagli’s previous project “Cannery Terror”, a punk rock band that’s energetic, raw, and exciting. However, both members were classically trained conservatory musicians as children. This clash of worlds finally materialized when the members met in the Parisian fine arts school “École de Beaux-Arts de Cergy”, deciding to share their love for music by starting a musical project titled “Agar Agar”.

So, we will be going over some of Agar Agar’s greatest releases, covering the band’s essential essence to any new listeners.

The reason this song is a special one among the band’s discography is that it was the first instance in which the duo decided to reveal a rather new side that would take over their debut album, following their self-imposed 3 month captivity in the far away cabin where it was written. Most of the band’s previous releases, both in their EP “Cardan” and their standalone singles, were prominently a mix of techno, pop, and dance music. “Gigi Song”, on the other hand, signals a subtler, more introspective side of the band that dictated many of the darker moments that were to come later in the album.

With echoed, endearing vocals and some instrumental flanging, the song almost feels like a distant memory, painting a very vivid scene that accompanies Clara’s lyrics. Words like “Oh, my little angel, don’t be terror stricken” represent a ballad sung by a transsexual woman to a baby she receives in a box, as a gift fulfilling her long-time wish.

This song is one of the band’s earlier releases, coming in the form of a standalone single that never made it to either the EP or the LP. However, it pushes towards the spotlight some of their more techno elements, with what could be their most memorable bass line and a beautiful vocal performance. While it is a cover of Demon’s “You Are My High”, it is difficult not to regard it as its own song. Very little was taken from the original besides a tune from the first few seconds, as well as the song’s title phrase (albeit slightly altered).

The lyrics are pretty straightforward, with Clara chanting the phrase “You are high, and I’m high too”. Still, great attention is paid to atmosphere in the way the vocals become darker and more distant halfway through the song, as though the track itself is what’s intoxicating the listener. This opiatic atmosphere makes for an exciting and upbeat yet equally ambient and immersive experience that is sure to captivate anyone who hears it.

Much like its name suggests, requiem is nothing short of an epic. The song could easily be a symphonic soundtrack painting the end of the world. Yet instead of striking horns and an assembly of strings, the track is entirely synthetic and retro, reminiscent of many of the earlier video-game soundtracks such as the original Zelda theme. 3 layers of monophonic keys carry the majority of this song through an instrumental epic, with instances of choirs taking over, and a pay-off that falls nothing short of beautiful when the vocals kick in after the long instrumental piece.

The mid-range and high monophonic keys often play in a loop, switching their two distinct tunes back and forth while the deep bass asserts that the band is done making songs that are only meant to be danced to.

Yet one of the more striking parts of the song is the lyrics, which at first glance seem out of context with the music. The closing vocal line to the album is, “Bitch you lied to me, I will kill your daddy.” However, the band has expressed that these lyrics, in context, are actually text messages sent between phones in a world where humans have all died, and only functional and adaptive machines remain, salvaging such traces of human interaction. Talk about dark.

2- Sorry About the Carpet

Probably the most commercial song on their debut album, this song offers a steady beat, consistent bassline, analogue melodies, and most importantly, soft, poppy vocals. The song’s beauty lies in its simplicity, it’s not trying to be something it isn’t, but instead just aspires to be enjoyable. While it came in a period of experimentation for the band, they made the smart choice of not over-complicating what is easily a hit song.

The song’s musicianship during the final two minutes (one if you’re hearing the single version) is one of the clearer examples illustrating the duo’s success in writing successful, catchy hits that they integrate within their style. With a very lighthearted music video that goes hand in hand with the lyrics, this fun tune becomes a song about the struggles of maintaining a relationship where the problems are brushed over rather than fixed (new carpets are added on top of the ruined ones).

While fans of the duo would be surprised not to see the fan favorite “The Prettiest Virgin” take this spot, Agar Agar’s top song title should more deservingly go to their second most popular song, “I’m That Guy”. To me, this song feels like the embodiment of all of the band’s different sides wrapped within a very perfect, 7-minute delivery. The song has it all: weird spoken verses, elaborate analogue instrumentations, a beautiful chorus, an exciting beat, and probably their most satisfying buildup – leading to a 2 minute finale that pays off in every way. From the chanted “Ah, give me goosebumps” taking advantage of Clara’s beautiful voice, to the beat that is sure to get heads moving in the crowd, the song sucks you right into it.

It introduces the band’s signature spoken-word bits that were to come in future songs like “Shiver”, admittedly written spontaneously mostly by throwing gibberish words/sounds. Yet despite all the strange quirks not found in many of today’s radio-friendly songs, Agar Agar manage to deliver their creation in a commercially successful envelope. And while the duo has expressed their disinterest in making more songs that cater to listeners commercially rather than experimentally, I believe their most brilliant songs were the ones that managed to combine their style with a more friendly, pop-driven style, explaining my top 2 picks on this list.

Which brings me to their most popular song, and why I didn’t put it on the list. This song is, by all means, great. However it is clearly meant as a purely commercial pop song, which is extremely enjoyable and radio-friendly at first, yet gets stale pretty quickly, and barely has anything new to offer. Even the duo expressed how little they like the song, and how little it represents them, often calling it silly. Nevertheless, it’s safe to say that the song did succeed in doing its job: it brought Agar Agar into the light, and gave them a huge fanbase that wouldn’t have been exposed to their more creative songs had they not released “The Prettiest Virgin”. In a way, this song is their own “Creep”.