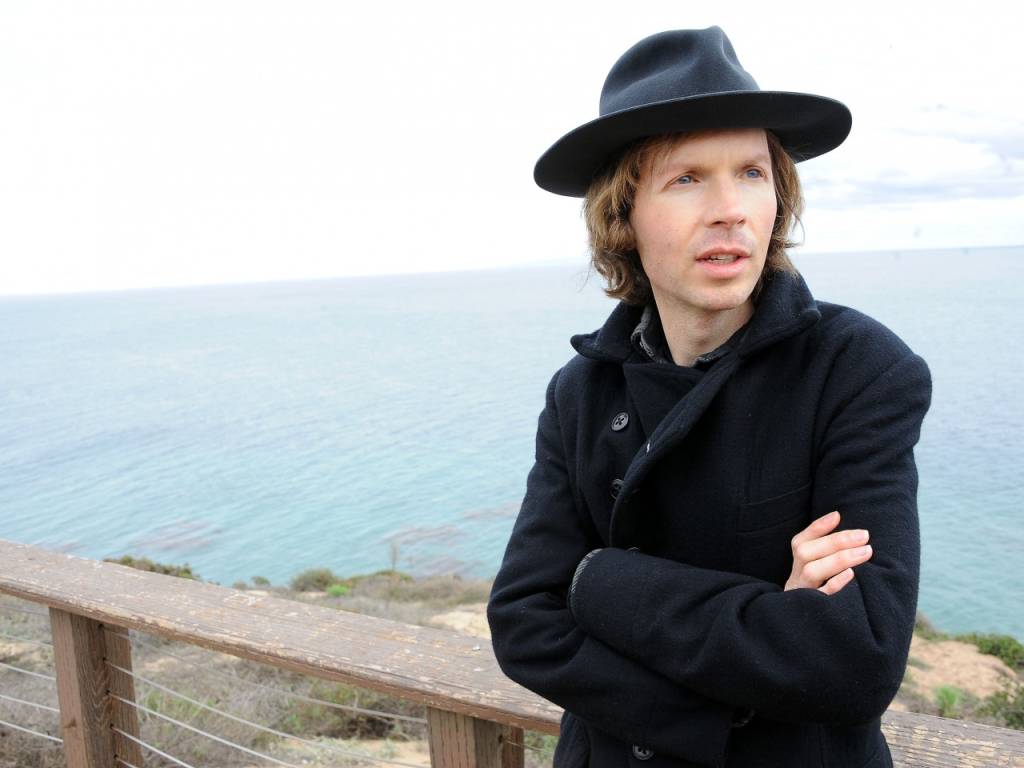 The Faces and Phases of Beck

Last month, genre-bending musical mastermind Beck released his long-anticipated twelfth studio album Morning Phase, his first in 7 years. Those who know Beck will know that in his decades-long career, the man has dabbled with more styles than you can handle. Each album presents a slightly altered Beck than the last, unique yet familiar, and Morning Phase is no exception. In celebration of this new release, as well as of his 1994 major breakthrough album “Mellow Gold” hitting the 20 years mark recently, I present a little overview of the many forms Beck has taken on each of his albums throughout the years…

Beck’s distorted and demented tune Trouble All My Days channels the grit and soul of the blues, which Beck used to play back in his early days. A lot of his early recordings were lo-fi and dirty, sometimes with pitched down vocals. Disturbing stuff…

Aside from twisted blues tunes, Beck was also a country-folk man, and with a sense of humor too. In Satan Gave Me a Taco, he recounts an epic, and most probably true, tale that all began when the devil himself offered him a delicious Mexican snack.

Loser was Beck’s breakthrough hit and, with the help of a kooky music video, introduced him to the general public as a far out weirdo stoner-rapper, spitting non-sequiturs over a blues-world-hop beat. Beck has always been into hip hop and traces of the genre can be heard throughout his body of work.

As great as Beck is at strange genre-bending fusions, he’ll always be a mighty fine folk artist; or anti-folk if you wanna call it. A great example is the song Asshole, where he channels his bizarre lyricism to lament on a dysfunctional relationship.

With legendary hip hop producers The Dust Brothers joining him in the studio, Beck further developed his unique style, tossing pop, rock, blues, funk, hip hop, electronic and more into the mix. Devil’s Haircut sees him singing his abstract lyrics over one diverse patchwork of an instrumental.

Following that high, Beck mellowed out a bit with a more conventional sounding straight-up rock record. Now Cold Brains is by no means an ordinary rock song, still bearing that distinct Beck flavor, but compared to his previous output, it’s a whole new dish.

Beck soon came back with a whole new bag of tricks. This time he was in full-on funk and soul mode with a pinch of hip hop for good measure, as well as some more sexual and romantic subject matter, as aptly demonstrated by the ever-so-groovy Sexx Laws.

A somewhat mellower more ethereal mood took over Beck’s following album, which many have called his magnum opus. He laments on a failing relationship once again in the track Lost Cause, a sweet and dreamy rock number that’s probably easier to get into than some of his previous material on the same subject.

Following that, Beck came crashing back into the fast lane, teaming up with The Dust Brothers yet again. The result is a more updated version of their previous collaboration, this time with a stronger electronic presence as you may notice in the hard-hitting E-Pro.

Beck’s sound began to grow more focused. The track Cellphone’s Dead illustrates this new sound nicely, with Beck rapping and singing, as he has done before, over a blend of rock, electronic and hip hop, but without much of the off-the-wall eclecticism that characterized his earlier works.

As Beck matured, so did his sound, and that would mean dropping the hip hop element, in favor of a cleaner, Danger Mouse-produced, sound with elements of pop, rock, electronic and classical music.  This also meant writing more straight-forward lyrics, as you can hear in the album’s title track, Modern Guilt.

Finally we arrive at modern-day Beck. Gone are the days of nonsensical folk rock singing and rapping over eclectic beats. The Beck of today is weary and levelheaded. He’s a Beck who produces his own music single-handedly and takes his sweet time doing it; the man spent the past 7 years fine-tuning his latest album, while in 1994 he put out 3 very diverse albums of varying-quality back-to-back. On this album, Beck revisits his mellow side, relying mainly on pop, rock, folk and classical elements. The track Wave is just sweeping strings with straight-forward reverby lyrics sung into the abyss; no beat, no solo, no chorus, just Beck.